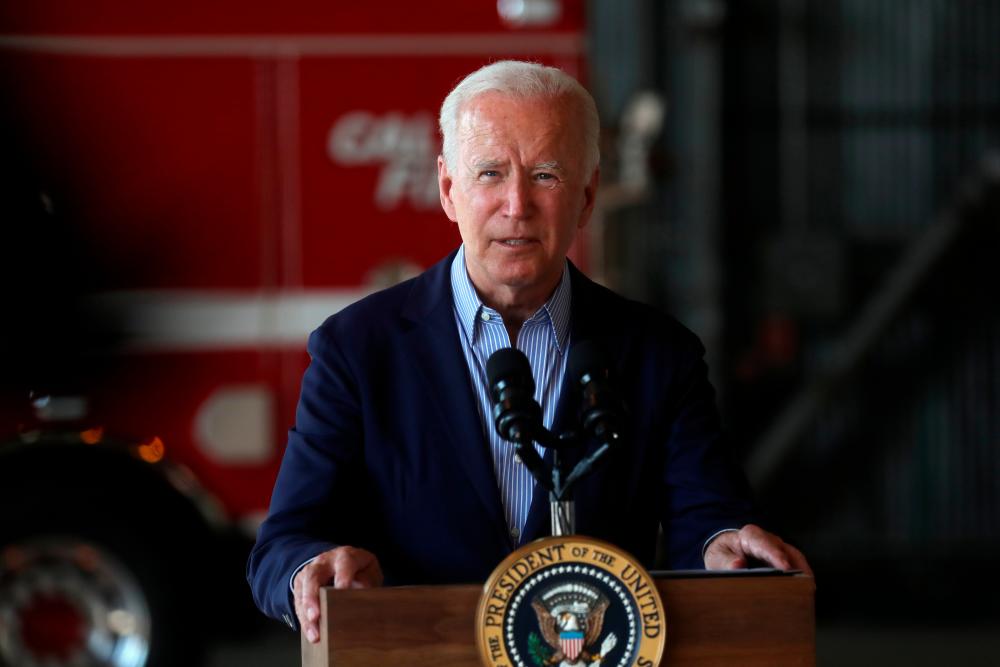 SACRAMENTO: President Joe Biden on Monday renewed his push for significant investments to combat climate change as he visited California during a three-state western U.S. tour and took an aerial tour of areas hit by one of the country's worst fire seasons.

The trip is aimed at highlighting the devastation caused by a warming planet, pushing for more resources to tackle the issue and touting the environmental initiatives that are part of the infrastructure bills his administration is pushing.

Biden will also campaign for fellow Democrat Gavin Newsom, who is battling to maintain his governorship in California's recall election on Tuesday.

Biden toured the California Governor's Office of Emergency Services in Sacramento with Newsom, where he addressed emergency operations officials and said parents are not just worried for their children over Covid-19 but whether they can also breathe the air.

“Scientists have been warning us for years that extreme weather is going to get more extreme. We’re living it in real time now,“ Biden said.

Extreme weather events cost the United States $99 billion last year, and that record would be broken again this year, the president said, underscoring the need for urgent, decisive action to combat global warming.

“We have to think big. Thinking small is a prescription for disaster,“ he said, touting a $1.2 trillion bipartisan infrastructure bill and a separate $3.5 trillion package he said would work to combat climate change over a decade. The measures face hurdles in the closely divided US Congress.

Biden got a firsthand look at the damage in California as his Marine One helicopter flew over a parched landscape hazy with smoke from the relentless wildfires. Patches of black in the landscape showed areas where the fires had been put out.

The Caldor Fire in California, which had threatened the Lake Tahoe resort area, has charred more than 219,000 acres (88,600 hectares) and destroyed more than 1,000 homes and other structures since it erupted in the Sierra Nevada range about 70 miles (112 km) east of Sacramento on Aug. 14.

As of Monday, firefighters had carved containment lines around 67% of the fire's perimeter. It is the second-largest blaze in the state this year, behind the Dixie Fire, which has scorched more than 960,000 acres (388,000 hectares) and destroyed 1,300-plus buildings farther north in the Sierras since it began in mid-July. That wildfire ranks as California's second-largest on record.

Earlier in the day, Biden visited the National Interagency Fire Center in Boise, Idaho, a hub designed to coordinate resources on wildfires - and held a briefing with state and local officials.

In Boise, the president said fire season in the United States is starting earlier each year and that this year alone, 44,000 wildfires in the country had consumed 5.4 million acres (2.2 million hectares) - an area roughly the size of New Jersey.

“Thank God, thank God we have you,“ Biden told firefighters in the room. He pledged to help federal firefighters make at least $15 an hour and said he is committed to raising the pay gap for firefighters who protect federal wildlands.

White House principal deputy press secretary Karine Jean-Pierre said on Monday that one in three Americans is affected by the increasing frequency of extreme weather events and that Biden’s message on his first trip to the US West Coast as president would be that the “climate crisis is in code red.”

The White House said late on Sunday that Biden had approved US disaster funding to help California amid the Caldor Fire. He ordered other federal assistance earlier this month after declaring the situation an emergency.

Biden will head later to Long Beach, California, to take part in an event with Newsom, an ally who is fighting to survive a Republican-led recall. Biden's presence, the day before polls close, is meant to help mobilize Democrats to vote and secure Democratic leadership of the nation's most-populous state. https://reut.rs/3C7TT3g

Democrats outnumber Republicans in California and recent polling shows a majority of likely voters opposing the recall, but Biden and Newsom are not taking anything for granted.

Vice President Kamala Harris, a former US senator from California, campaigned for Newsom last week and painted the recall, which is backed financially by state and national Republican groups, as part of a broader Republican effort to expand conservative restrictions on voting, abortion and LGBTQ rights. https://www.reuters.com/world/us/us-vp-harris-rallies-california-governor-facing-recall-2021-09-08/

Biden will focus even more on infrastructure during a stop in Denver on Tuesday, where he will tout the legislation he is seeking to repair US roads and bridges along with a swath of other domestic policy priorities. -Reuters