Biden tries to save voting rights bill in evening talks 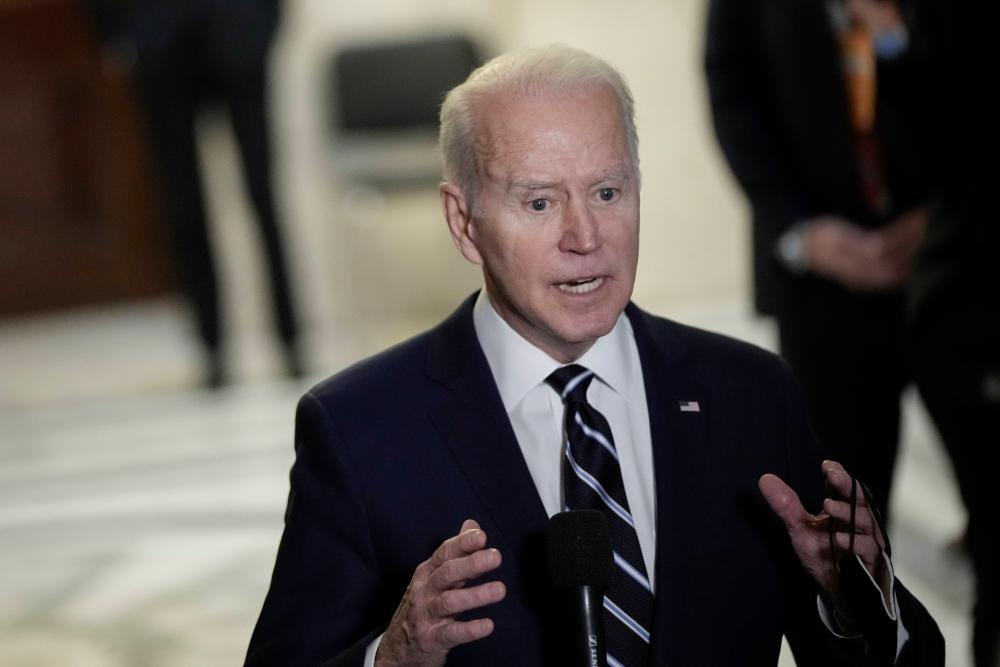 WASHINGTON: President Joe Biden(pix) negotiated into the evening Thursday with two holdout senators from his own party to try and save his beleaguered voting rights bill on a day that also saw him get a stinging setback on Covid-fighting strategy.

The two national voting rights bills, which Biden argues are needed to save US democracy from Republican tampering with local laws, appeared close to dead due to insufficient support in his own party.

However, the two principle holdout senators, Joe Manchin of West Virginia and Kyrsten Sinema of Arizona, made a surprise visit to the White House late in the day.

“The president will host Senator Manchin and Senator Sinema at the White House this evening to discuss voting rights,“ an official said.

Earlier, Biden had gone in the other direction, up to Capitol Hill, to try and persuade the party to unite. He came out sounding close to defeat.

“I hope we can get this done, but I’m not sure,“ he conceded.

Biden was trying to wrangle Democrats into carrying out a tricky legislative maneuver that would change a Senate rule and let them get the bills passed, despite total Republican opposition.

But before the president even arrived for his lunch with legislators, Sinema declared that while she backed the voting rights bills themselves, she would not agree to changing the rule, known as the filibuster.

Sinema said that simply bypassing the filibuster, which requires a supermajority and therefore some Republican support for a Democratic bill, would deepen the country’s biggest problem -- “the disease of division.”

Later, Manchin also made clear he opposed breaking the filibuster, even if he supported the actual bills. Unless they both change their minds, the measures look set to die.

Biden argues that the national voting rights bills are vital to preserving US democracy against Republican attempts to exclude Black and other predominantly Democratic voters through a spate of recently enacted laws at the local level.

Biden's approval ratings are in the low 40 percent range, and Republicans are in a good position to take control of Congress from the Democrats in the November midterm elections, meaning time is running out for him to get major legislation passed.

Ironically, in an era of implacable Republican-Democratic divide, the Republicans aren't Biden's most immediate problem.

His Democrats control the Senate by just one vote, and that's not enough under currently accepted rules to pass most laws, which instead require a supermajority including some opposition participation.

That filibuster rule has allowed Republicans to gum up the Democrats' work in the Senate repeatedly over Biden's first year in office.

Sinema and Manchin argue that the filibuster is too established a procedure to be broken unilaterally by one party.

Biden had asked for an exception, allowing the Democrats to change the rule temporarily and vote for the election bills on a simple majority basis -- effectively cutting out the Republicans.

But just changing the rule would require unanimous Democratic approval, giving Sinema and Manchin effectively veto power. A similar scenario played out a month ago when Biden's major climate and social spending project, the $1.7 trillion Build Back Better bill, sank because Manchin refused to give his support.

Senator Chuck Schumer, the Democratic leader in the Senate and a key Biden ally, said the fight for the voting bills was not over.

“The president made a powerful and strong and impassioned presentation for us to get things done, and we are going to do everything we can to pass these two bills,“ he said.

But with his prestige on the line, Biden is in an uncomfortable spot.

African-Americans are at the heart of the Democratic coalition, and some influential leaders have already criticized Biden for doing too little, too late on election laws -- an issue steeped in a history of racism and attempts to restrict Black votes.

On the other side, Republicans are using Biden's big push to argue that he has abandoned his centrist roots and turned far-left.

Meanwhile, the Supreme Court ruled against Biden's Covid-19 test-or-vaccine mandate on large businesses, a key component in the administration's bid to control the spread of the Omicron variant when only 62 percent of Americans are fully vaccinated.

Biden had issued the mandate for companies with 100 employees or more to insist on vaccinations or regular testing as a way to put a lid on the stunning spread of the latest Covid variant.

However, conservatives portrayed the mandates as government overreach, turning the policy into a fierce political and legal fight that illustrated Biden's limited powers.-AFP