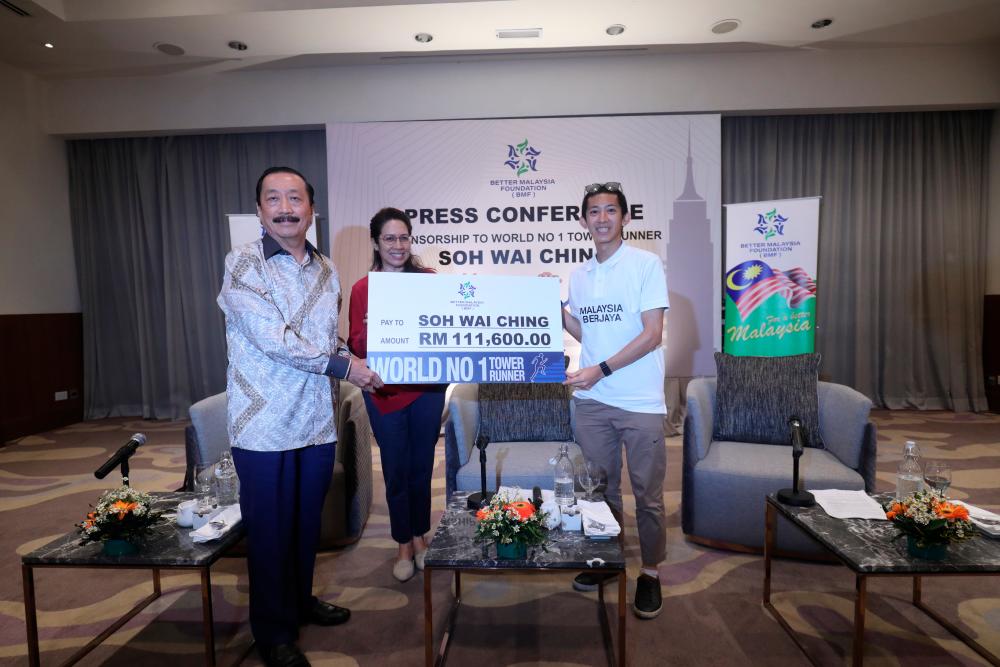 PETALING JAYA: The Better Malaysia Foundation (BMF) has pledged to support world No. 1 tower runner, Soh Wai Ching, to dominate the sport by sponsoring him for a year at a total of RM111,600 starting this July until June next year.

BMF chairman Tan Sri Vincent Tan said it is very happy and pleased to support the 28-year-old to continue making a name for Malaysia globally.

“Malaysia should be proud to have Soh as an athlete who has achieved remarkable honours for us, and I hope with our help of giving him the needed funds, he can continue to compete and remain a champion.

“He is a good example of a Malaysian athlete, he has the right attitude and more Malaysians should follow in his footsteps so that we can be a successful nation,” he said.

Tan and Sunita jointly presented a mock cheque for the RM111,600 to Soh at the Berjaya Times Square Hotel here today.

Ranked world No.1 since this April, Soh thanked BMF for supporting his career and ambition to build a national tower running team and ultimately dominate the sport.

“A very big thank you to Tan Sri Vincent Tan for setting up BMF. I will forever remember his gesture, and one day, I shall give back to the community, just like he does.

“This sponsorship will alleviate my financial worries so that I can focus on my training, and upcoming competitions, and continue making Malaysia proud,” Soh said.

The sponsorship has made him, a sports science graduate and son of a Selayang taxi driver, relocate from Dubai where he has lived for the past five months.

Since making his debut in tower running in 2017, Soh has competed in 69 races worldwide, with 37 wins, including 19 consecutively from December 2019 until this May, and 23-course records.

Soh said he wished to see a breakthrough in tower running in Malaysia, which is ranked ninth in the world.

In May, BMF provided US$52,000 (RM228,000) to US-based Malaysian athlete Shereen Vallabouy, the first Malaysian female athlete to qualify for the 400-metre Olympic Games 2024, in her pursuit of academic and sporting excellence.