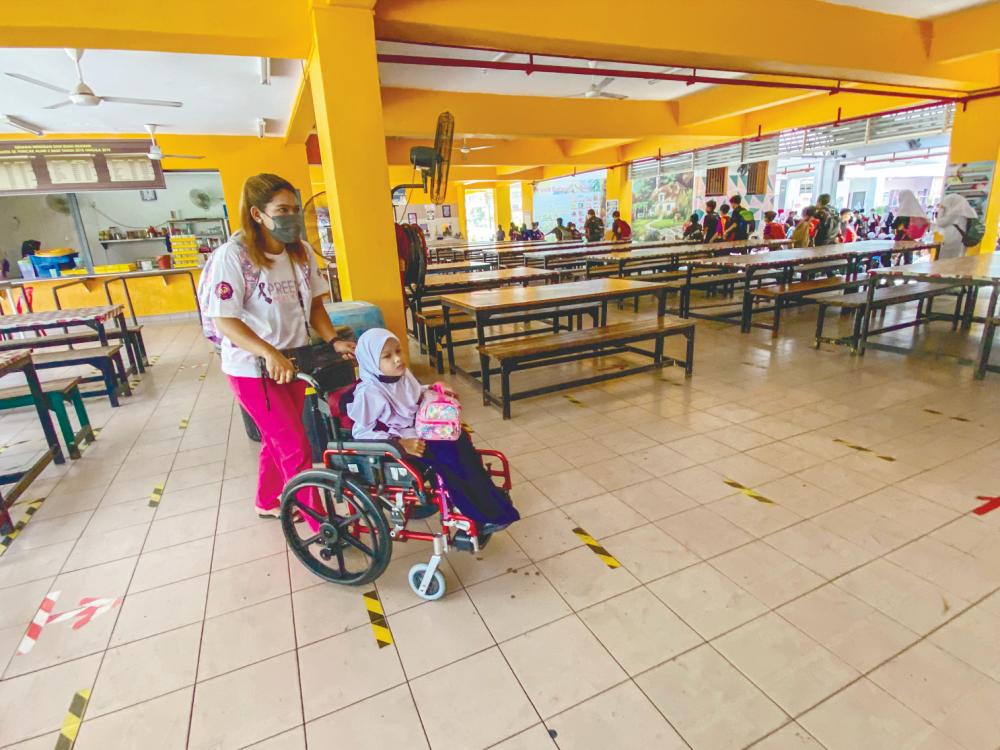 PETALING JAYA: Two years into her primary school education, Adreena Scha Azrul Shah’s mother still carries her to her classroom on the first floor of her school building.

Adreena Scha suffers from cerebral palsy, which limits her mobility and leaves her wheelchair-bound.

Her mother, Norazleena Yaha, said it is heartbreaking to see that her daughter is not able to enjoy school like other children.

“It saddens me to have to carry her to class every day. I know the school might say I agreed to it but they need to understand I don’t have a choice because this is my daughter,” she told theSun.

Norazleena claimed she tried to contact the school’s headmistress but failed.

“I have never met her during the two years my daughter has been schooling there. Other teachers kept saying she (the headmistress) was not available,” she said.

Calls to the school revealed there is some truth to Norazleena’s claims that the school administration lacked empathy for her daughter.

A teacher who answered our call said he was aware of Adreena’s predicament and had already reached an agreement with her parents.

The teacher said the school agreed to keep her in the mainstream class but her parents would have to make arrangements for her to attend classes.

The teacher also said they were still looking for solutions, but failed to reveal their suggestions.

Checks at the school also showed there were rooms on the ground floor but only two were used as classrooms for special education. The other rooms were labelled as bilik kemahiran or skills lab.

“The government is in breach of the Convention on the Rights of Persons with Disabilities article.

“They must provide lift or ramps and ensure that construction of new school buildings must take into consideration facilities for all students,” she said.

Noor Aziah added that the headmistress is also negligent for not helping to facilitate Adreena’s needs.

“Convert the rooms into accessible classrooms and, if it is necessary, move the labs to other floors.

The headmistress must also remember that some older teachers might not be able to climb stairs,” she said.

Lawyer Nur A’minahtul Mardiah Md Noor said Articles 8 and 12 of the Federal Constituition are related to educational rights of children with disabilities, Nur A’minahtul Mardhiah said even though Article 8 of the Constitution provides for equality before the law, there is no constitutional provision on discrimination against persons with disabilities (PWD) such as Article 12 of the Federal Constitution that provides citizen’s right in respect of education.

“The PWD policy intentionally provides basic statement on equality rights and opportunities for disabled persons to fully and effectively participate in society. The policy assists the PWD in terms of enabling them to live independently,” she said.

Although it may not be in Norazleena’s plans, Nur A’minahtul said she can file a suit against the school and the Education Ministry with all existing laws but it will be an uphill battle.

If she succeeds, it could change the entire discrimination towards other children by applying the PWD Act 2008, Federal Constitution, Education Act 1996 and Child Act 2001.