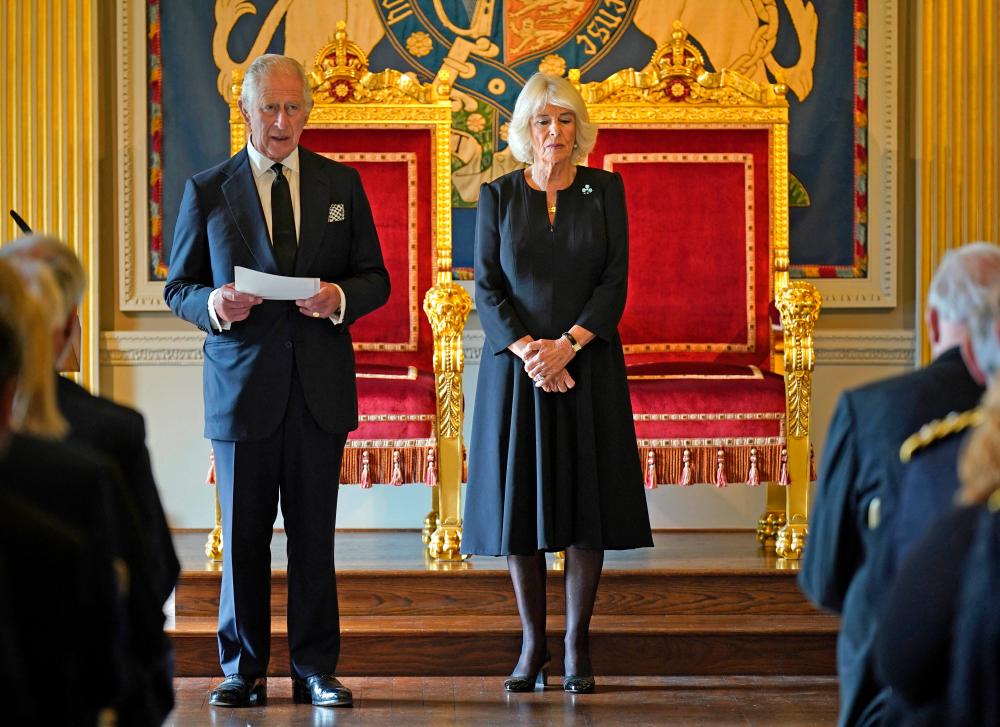 Britain’s King Charles III, flanked by Britain’s Camilla, Queen Consort, makes a speech after receiving a message of condolence following the death of his mother Queen Elizabeth II, at Hillsborough Castle in Belfast on September 13, 2022, during his visit to Northern Ireland/AFPPix

BELFAST: Charles III on Tuesday made his maiden visit to Northern Ireland as king, as he tours all four nations of the United Kingdom before next week's state funeral of his mother Queen Elizabeth II.

The 73-year-old head of state's jet touched down in Belfast from Edinburgh, where the late queen's coffin was brought after her death last Thursday aged 96.

The casket will be flown on Tuesday evening to London, where huge crowds are expected to pay their respects as she lies in state from Wednesday evening until her funeral on Monday morning.

As heir-to-the-throne, Charles made 39 visits to Northern Ireland, whose recent history has been scarred by sectarian violence over British rule and where a fragile peace has held since 1998.

His 40th visit comes as unionists loyal to the Crown feel their place in the wider UK is under threat as never before, with nationalists set to lead the devolved government in Belfast for the first time.

Meanwhile the possibility of a united Ireland is seen as growing.

But at Hillsborough Castle -- the monarch's official residence in Northern Ireland -- he sent a message to political leaders that he would work for all communities in the divided province.

“I take up my new duties resolved to seek the welfare of all the inhabitants of Northern Ireland,“ he told them.

The queen's visit to Ireland in 2011 was the first by a British monarch since its independence from the Crown and was seen as a huge step towards cementing the hard-won peace in Northern Ireland.

Charles and his wife, Queen Consort Camilla, greeted crowds who had turned out early to catch a glimpse of the couple at Hillsborough.

Ceremonial gun salutes in his honour then rang out as the royal standard was raised above the castle southwest of Belfast.

Flowers, cuddly toys and handwritten remembrance notes of the late queen had been left at the gates.

“This is very important for Charles to come here,“ Rhonda Irvine, 47, a wedding and events administrator, told AFP.

Describing Charles’s late mother as an “inspiration for him”, she predicted he would be a “very good” king.

Ann Sudlow, 61, a retired nurse from nearby Dromore, had also made the early morning drive “to show the king that we’re behind him as a country and Northern Ireland is supporting him”.

While large crowds welcomed Charles, visiting the deeply divided region could prove testing. Nationalist parties boycotted the proclamation of the new king but will meet him.

Belfast's feuding political leaders are split between fiercely loyal unionists and nationalists who want to reunify with Ireland, and the power-sharing assembly in Belfast is suspended.

Unionists are boycotting the devolved parliament at Stormont because of their opposition to post-Brexit trading rules that they say cuts Northern Ireland adrift from mainland Great Britain -- England, Scotland and Wales.

Charles will attend an Anglican religious service in the city where the president, prime minister and foreign minister of Ireland are also expected.

Britain is in 10 days of national mourning for Elizabeth II, who was a fixture of the nation's life and consciousness for seven decades.

Charles has seen his popularity recover since the death of his former wife Diana in a 1997 car crash -- and has surged in recent days, according to a new survey Tuesday.

But he has also been embroiled in several scandals in recent years.

With republican movements gaining ground from Australia to the Bahamas, the new king faces a challenge keeping the Commonwealth realms in the royal fold.

Prime Minister Jacinda Ardern said her country New Zealand, where Charles is also head of state, will likely become a republic in her lifetime.

But she added: “I don’t see it as a short-term measure or anything that is on the agenda soon.”

The queen's coffin will be moved from St Giles' Cathedral in Edinburgh on Tuesday afternoon, and flown to an airbase near London, accompanied by her only daughter, Princess Anne.

Thousands of people are expected to line the route as the hearse drives the queen's body to Buckingham Palace, which has become the focal point for floral and other tributes.

In Edinburgh, where the queen's body was brought on Sunday from Balmoral, the Scottish Highland retreat where she died, thousands of people queued throughout the night.

They came to pay their respects after Charles, Anne and their two siblings, Andrew and Edward, held a 10-minute vigil inside the 12-century cathedral -- images that dominated the front pages of Britain's newspapers on Tuesday.

“The Queen’s guard,“ headlined The Times alongside a photograph of a sombre-looking Charles.

One woman, who gave her name only as Vicki, took an early train from Glasgow with her nine-year-old son “just to pay our respects”.

It’s “just a moment in history, once in a lifetime,“ she said.

An unprecedented security operation is being put in place for the state funeral, which is expected to be attended by hundreds of heads of state and government, as well as global royalty.

Soldiers from the Household Division of regiments, which form the monarch's bodyguard, began practising for the funeral procession in London overnight Monday to Tuesday.

At precisely 2:22 pm (1322 GMT) on Wednesday, the queen's coffin will be taken from Buckingham Palace to Westminster Hall, the oldest part of the parliamentary estate.

Tens of thousands of people turned out in Edinburgh on Monday to witness the queen's coffin being taken from the monarch's official residence in Scotland, the Palace of Holyroodhouse, to St Giles'.

Charles and his siblings followed the coffin up the majestic Royal Mile in near silence punctuated only by the sound of cannon fire at one-minute intervals from the ramparts of Edinburgh Castle.

Hundreds of thousands of mourners are expected in London to file past the queen's coffin at Westminster, with queues predicted to snake for several miles (kilometres) along the River Thames.

More are set to flood the streets in the run-up to the funeral and on the day itself.

The first arrived for the lying-in-state queue on Monday -- more than 48 hours before the line opens.

“It’s going to be a once-in-a-lifetime chance to be part of this unique event,“ she told.