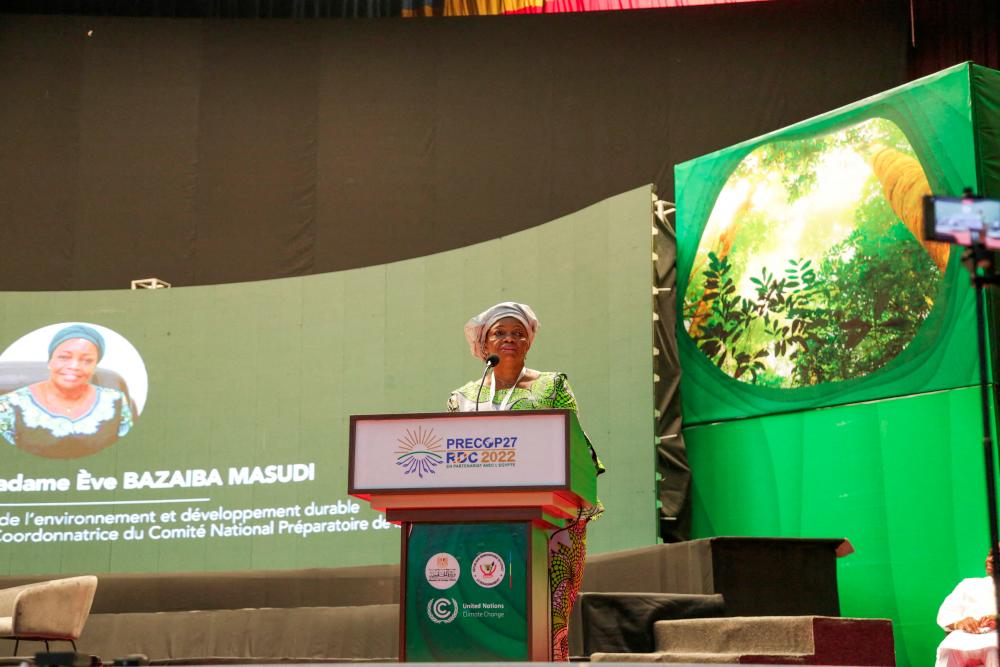 Bazaiba speaking during an informal ministerial meeting ahead of the COP27 climate summit, in Kinshasa, Democratic Republic of Congo, on Monday, Oct 3. – REUTERSPIX

LONDON: One in seven funds branded as sustainable has a carbon emissions intensity higher than the average across all investment funds, and no climate-labelled fund has a portfolio fully aligned with the Paris Agreement's goal, a study showed today (Oct 4).

The analysis, conducted by sustainability data and technology platform ESG Book, is the latest to question the reliability of funds marketing themselves on environmental, social and governance (ESG) grounds.

ESG- and climate-labelled funds have boomed in recent years as trillions of dollars are looking for products that are deemed more socially and environmentally friendly, prompting regulators to increase scrutiny of investment managers' claims.

“If you are an investor in a fund, you can see your daily financial performance, but hardly anybody tells you ‘is the fund actually delivering on (its) climate targets?’,” ESG Book CEO Daniel Klier told Reuters in a call.

Among the 515 climate and ESG funds the study analysed, 73 showed a greater emissions intensity ratio than the average recorded across the 36,000 funds ESG Book tracks, and 15 funds exceeded 400 tons of carbon dioxide equivalent per million dollars of revenue – more than twice as high as the wider average.

Klier, previously global head of sustainable finance at HSBC, said there was a need for a better labelling system and greater understanding that some companies are closely managing how they perform on ESG metrics but not improving their climate performance.

The analysis also found that many of the 95 climate funds ESG Books examined invested in fossil fuel and mining companies, including in Shell, ExxonMobil and BHP Group .

While such companies might have a place in climate transition funds, ESG Book said including them in ‘climate aware’ or ‘climate care’ funds seemed “at odds with the definition of a climate fund”.

The landmark 2015 Paris accord set a goal of limiting a rise in the world’s average surface temperatures to “well below” 2°C and ideally below 1.5°.

In another development, high-level speakers at climate talks in Kinshasa called out rich nations on Monday for failing to honour a US$100 billion (RM464 billion) per year funding pledge to developing countries, warning that fair finance was needed to avert the worst of the climate crisis.

Dozens of ministers and senior delegates are in Democratic Republic of Congo this week for a final meeting before the COP27 climate summit in November, where more vulnerable countries hope to push for compensation for economic losses linked to climate catastrophes.

“The finance currently available is a pittance with respect to the magnitude of disasters vulnerable nations and people are facing and will face,” UN deputy secretary-general Amina Mohammed said at the start of the three-day event.

Egypt, which is hosting COP27, is working on how to include this kind of compensation for so-called loss and damage on the formal agenda – a task complicated by industrialised nations' wariness of the liabilities they may face.

Mohammed and Egyptian Foreign Minister Sameh Shoukry also highlighted the failure to deliver on an existing US$100 billion per-year pledge to developing countries, which has only ever been partially met and is due to expire in 2025.

Mohammed also criticised an over 50% shortfall in the US$356 million pledged to a climate adaptation fund at COP26 last year.

The pre-summit is meant to be a forum for countries to shape the agenda for negotiations in Egypt and improve the chance of progress.

Earlier Bazaiba told Reuters the focus of talks would be how the richest and most industrialised nations should take financial responsibility for their role in the climate crisis.

“The G20 is responsible for 80% of the pollution in the world,” she said in an interview on Saturday. “The real debate of this pre-COP and COP27 is the responsibility of the polluting countries.” - Reuters