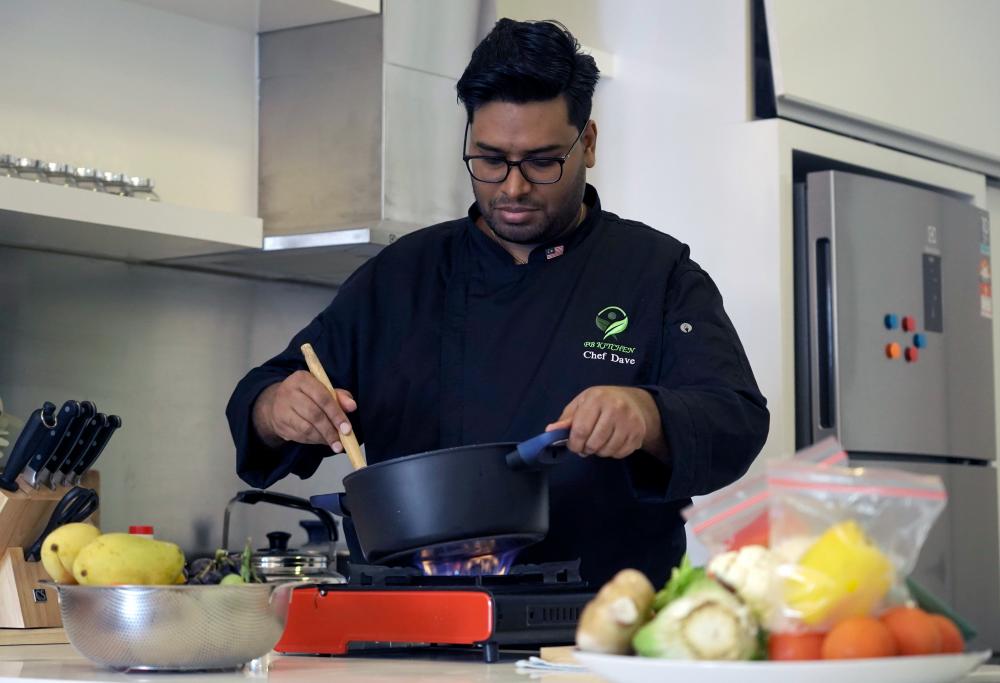 JUST one episode of a documentary on the ugly side of raising animals for food was enough to make Kalidevan Murugaya(pix) give up meat.

Chef Dave, as the sworn vegan is now called, has even gained quite a following in his mission to promote a meat-free diet.

But 29-year-old Dave did not start out as a vegan (loosely defined as a person who engages in a lifestyle that excludes cruelty to animals).

Formerly a chef at a five-star hotel, cooking meat dishes came with the job for him. It was the same when he spent a year working on a cruise liner and travelling the world.

However, an injury he sustained in the kitchen left him with no choice but to disembark for a minor surgery. Then, disaster struck.

“When it came time for me to renew my contract in March last year, the Covid-19 pandemic stormed in,” he told theSun.

Two days before Malaysia imposed a movement control order, he was told that his contract would not be renewed. The pandemic had grounded the cruise business.

During the months he spent recuperating from the surgery, Dave watched many documentaries. One of them, titled Cowspiracy: The Sustainability Secret, changed everything for him.

“I realised how animal husbandry has led to global warming but as a chef, I could not initially relate to a meat-free menu,” he recounted.

“But when I saw the part on how eggs were processed, it depressed me. I began to wonder about our compassion, about love,” he said.

Dave immediately took eggs and dairy products out of his diet. He even changed his personal care products to “cruelty-free” options.

Eventually, he hit upon the idea of tweaking Malaysian cuisine to make them vegan friendly and sharing them online.

“It was a one-man job. I would cook, shoot and edit the videos,” he said.

He displayed verve and dexterity in everything, from handling a hot wok to the simple task of cutting vegetables and soon attracted a lot of attention to his online videos.

To widen his exposure, he began to leave laminated notes on what he was doing at the doorsteps of other residents in his condominium.

Overnight, he gained more than 10,000 subscribers on his YouTube channel.

Dave began to focus on creating vegan versions of Malaysian and Western recipes and in just three months, he came up with a menu of 40 dishes.

“I’ve made vegan bak kut teh and vegan nasi lemak,” he said. He substitutes the meat in these dishes with tofu.

He would sometimes pick up tips for new recipes from others online.

“Some of the subscribers on my YouTube channel have asked me to share my recipes, but I must admit that they are not entirely my own,” he said.

Dave insists that he turned to veganism based purely on his objection to how animals are being treated.

“It’s never been about me or my health. It’s all about the mistreatment of innocent lives.”

He admitted that having been a meat eater for most of his life, not consuming chicken or lamb is still a challenge.

“The cravings were especially strong at the initial stage but I continued to remind myself why I was doing it,” he said.

When he finally overcame the temptations, he felt “purified”.

Dave also acknowledge that living on a plant-based diet is not for everyone.

“I would never force anyone to change his diet. This is a personal choice.”

He also cautioned against weight-loss diets, that he claimed were unhealthy.

Today, he hosts cooking classes for 2,700 online subscribers and he even has a studio from where he hosts his daily cooking show.

For him, cooking is therapeutic.

“I even do all the washing and cleaning. I enjoy the process.”