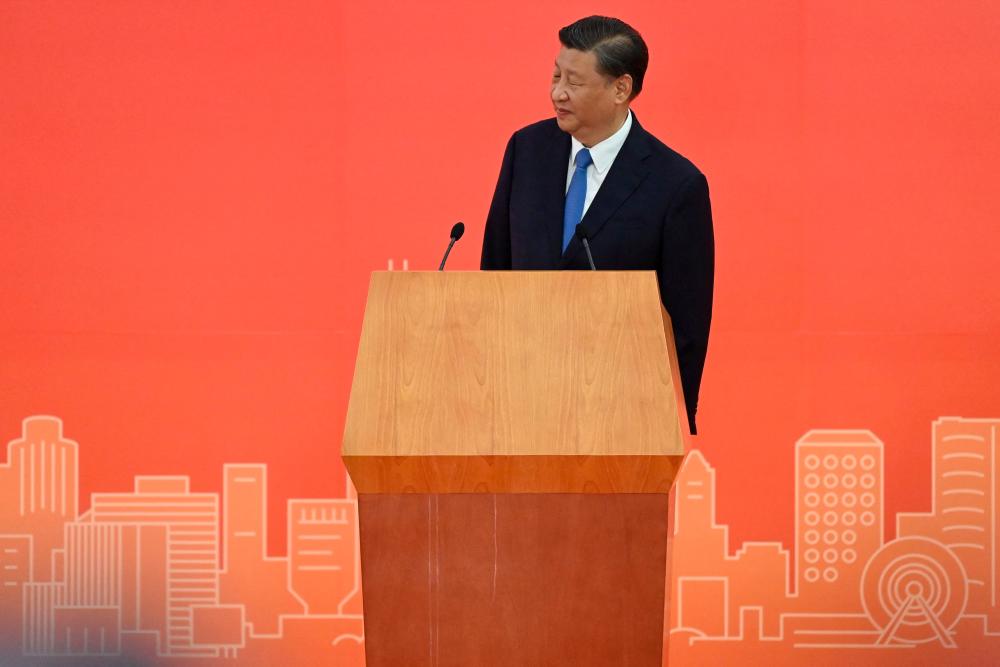 Xi’s two-day visit, which will also see him inaugurate Hong Kong’s new government on Friday, is a chance for the Chinese Communist Party to showcase its power over the city after unleashing a harsh crackdown that has crushed the business hub’s democracy movement.

It is Xi’s first trip out of mainland China since the beginning of the Covid-19 pandemic and his first to Hong Kong since massive protests overwhelmed the city in 2019.

“After the storms, Hong Kong has been reborn from the fire and emerged with robust vitality,“ Xi said upon arriving by high-speed train on Thursday afternoon.

Friday also marks the halfway point of the 50-year governance model agreed by Britain and China under which the city would keep some autonomy and freedoms, known as One Country Two Systems.

The anniversary used to be a prime example of those freedoms in action.

For decades after the handover, in parallel to the official celebrations, every July 1 hundreds of thousands of residents would take part in a march to voice political and social grievances.

But that march, like all mass gatherings in Hong Kong, has been banned by police for the last two years, under a mixture of coronavirus restrictions and a security crackdown.

Critics say that crackdown, strengthened under a national security law imposed by Beijing in 2020, has betrayed the promise that Hong Kong would retain its way of life after the handover.

“We made a promise to the territory and its people and we intend to keep it, doing all we can to hold China to its commitments,“ British Prime Minister Boris Johnson said Thursday.

But Xi insisted Thursday that One Country Two Systems had “great vitality”, and would guarantee “long-term stability and prosperity in Hong Kong”.

Those coming into the president’s orbit -- from the schoolchildren who welcomed him at the train station to the highest-ranking government officials -- have been made to limit their social contacts, take daily PCR tests and spend days in a quarantine hotel.

Parts of the city have been closed off, and media coverage has been tightly restricted.

Xi was expected to go back to Shenzhen in mainland China overnight.

Authorities have also moved to eliminate any potential source of embarrassment during Xi’s time in the city, with national security police making at least nine arrests over the past week.

More than 10 members and volunteers of the League of Social Democrats (LSD) -- one of Hong Kong’s few remaining opposition groups -- were told by police not to protest.

Six LSD members had their homes searched by officers on Wednesday, the group’s president Chan Po-ying said in a statement.

Several of the group said they had been followed and watched.

Authorities have sought to portray an image of public support for the celebrations, with signs proclaiming a new era of “stability, prosperity, opportunity” ubiquitous throughout the city.

But the atmosphere has been muted by typhoon Chaba, which has been gathering force as it approaches the city, as well as by widespread road closures for security purposes.

In the city’s Victoria Park, the football pitches which used to be the gathering point for July 1 march-goers are being used for a display celebrating the anniversary.

The centrepiece is a huge Chinese national flag sided with a slightly smaller Hong Kong flag, each occupying half of a soccer pitch.

Kelvin Lam, a financial professional in his 40s, was disappointed after a short tour during the brief rainless hours on Thursday morning.

“Is this everything they have got here? Nothing has been removed because of the typhoon?” he asked.

Lam used to join the July 1 march before 2019, and now he said the city “feels different”.

“After what happened a few years ago, I think now the priority is safety,“ said a woman surnamed Xu, when asked about the loss of the rallies.

“A safe, stable life is the most important for ordinary people.”-AFP