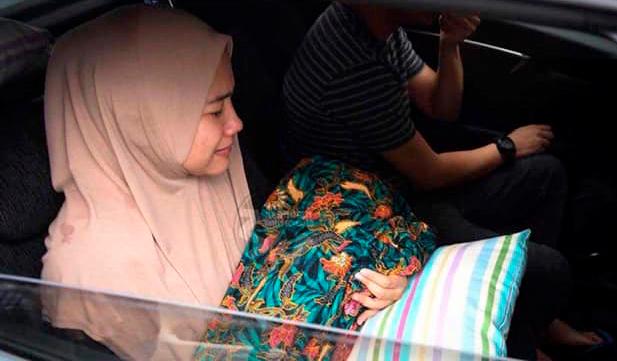 KUALA LUMPUR: The horrifying and heart-wrenching death of a five-month old toddler Adam Rayqal Mohd Sufi Naeif in early July 2018, serves as a grim reminder of the need for parents to be on high alert.

The boy was reported missing from the babysitter's house at Kampung Nakhoda, Batu Caves on July 3, 2018 before his body was found placed in a green zipper bag inside the freezer compartment of the fridge at the house by the police late at night.

The babysitter, Noor Aqilah Abd Rahman, 36, who was later charged in court with committing the offences, pleaded guilty to the charge of exposing the toddler in a manner that was likely to cause him head injuries. She also pleaded guilty to disposing of the baby's body with intent to conceal his death to escape punishment.

A post-mortem revealed that Adam Rayqal died from head injuries due to blunt force trauma. On Nov 11 this year, the Court of Appeal upheld a six-year jail sentence imposed on Noor Aqilah.

Ironically, concerns about these centres, which have frequently been under intense media spotlight, seem to be at the back of the line, with no end in sight to child abuse.

Cases of child abuse, neglect and negligence as well as abuse-related fatalities remain unabated, with perpetrators showing no remorse for what they have done.

Igniting the recent scrutiny on child abuse is the case of a Singaporean woman who pleaded not guilty at the Ampang Sessions Court here on Oct 13 to abusing an autistic child.

It was previously reported that the autistic boy’s father noticed bruises on the left shoulder and both eyes when fetching him from the centre on Oct 1.

A video also went viral showing a woman behaving violently towards an autistic child. Acording to police, one of the teachers had informed the man that his son had banged his head on the table as he did not want to eat his food.

Feeling suspicious, the father checked closed-circuit television (CCTV) footage from the scene and lodged a police report that his son had been abused.

Also drawing public and media attention is the case of two boys who were allegedly abused by their nanny in an incident at Iskandar Puteri, Johor.

According to media reports on Oct 6, the mother said she found injuries on her sons, aged six and 11 years old, and believed they were scalded by hot water and suffered cigarette burn marks to their bodies.

Earlier on Oct 5, Bernama reported a seven-month-old baby girl suffered bruises on her body after being placed with a babysitter in Taman Selayang Jaya, Selayang near here.

According to police, the baby had bruises on her cheeks, left ear and left thigh. The bruises were noticed by the baby’s 40-year-old mother after fetching the baby, who was placed under the care of the babysitter.

The medical officer’s examination found that the victim had soft tissue injuries on her left thigh and left side of her face, and she received outpatient treatment at Selayang Hospital.

Nothing is more traumatic for parents than to learn their child has been seriously or fatally injured. It can be especially devastating if the child’s care was entrusted to a babysitter who provided negligent care or who was abusive.

One of the most common types of child care negligence of which a bad babysitter may be guilty is failure to properly supervise a child. Negligent babysitters have caused babies to choke while drinking milk or children to choke while eating food; children strangled by the straps of a baby swing and children drowned in the bath tub, etc.

For a teacher, Ramisah (not her real name), 42, news of child abuse brought back sad memories of last year's incident involving her son, who is now three years old.

“It was like a bad dream for me when I received a phone call from my babysitter that my little boy had fallen from the stairs and was rushed to the hospital after he became unconscious. My son was warded for five days for further medical examination. Alhamdulillah (praise be to Allah) he did not sustain any serious injury.

“My babysitter told me that my son tried to climb up the stairs and fell. I however felt that something was not right and pressured her to tell the truth. She finally admitted that she was mopping the floor and my son tripped on the wet floor,“ she told Bernama recently.

On lessons learnt from the incident, Ramisah said she no longer sends her son to babysitters who operate from their own home but opt for registered childcare centres to care for her child when she goes out to work.

Relating her story, she said, the babysitter's house is located near her place, coupled with the fact that the babysitter has 10 years of experience in childcare, with the costs being relatively cheaper compared to registered childcare centres.

“I was actually hasty when deciding on the babysitter as I had to report for work after my postpartum period. Furthermore, I did not have any previous experience as this is our first child,“ she said.

Meanwhile, President of the Association of Registered Childcare Providers Anisa Ahmad, who does not rule out that most cases are due to unskilled babysitters, said that such incidents are often related to those who are unregistered.

She said all these individuals, whether operators, supervisors, care providers of childcare centres/early childhood care educators or home-based babysitters, are required to attend the PERMATA Early Childhood Care and Education Course or Kursus Asuhan PERMATA (KAP), managed by the Social Welfare Department (JKM), and they also have to pass both practical and written tests.

“The KAP certificate is a licence for those who register as certified childcare providers under JKM through childcare centres. They must also comply with all standard operating procedures (SOPs) at institution-based, workplace-based, community-based or home-based childcare centres.

“For childcare providers, especially housewives who have more than four children under their care, they are required to register with JKM as home-based childcare centres, in accordance with the provisions of the Childcare Centre Act, 1984 (Act 308), she told Bernama recently.

Those found guilty of not registering their childcare centres can be fined a maximum RM10,000, jailed two years or both.

Anisa said among others, registered childcare providers must have experience in caring their own children, nephews or nieces or other people's children. They should be natural nurturers, having a natural ability to take care of others and love children.

They are also required to undergo first aid training and food preparation courses. It is also compulsory for them to be vaccinated against typhoid, with the latest having completed two doses of Covid-19 vaccine.

“Other SOPs include, every care provider should prepare a log book for each child under their care to record the daily activities for monitoring purposes as well as parents’ reference. They should also display their Childcare Centre Registration Certificate issued by the State Community Development Director (PKMN) at the premise or house, in addition to periodical monitoring by JKM enforcement officers.

On the exorbitant fees imposed by registered chilcare centres which caused many parents to send their children to babysitters' homes or unregistered childcare centres or nurseries, Anisa said the issue should be weighed carefully by the relevant authorities to avoid further pressure on parents.

She said there are childcare centres that offer incredibly low fees, causing concerns that they would “wash their hands off” whenever an untoward incident takes place at their centre.

Anisa also advised parents not to be easily influenced by advertisements in the social media when hiring babysitters for their children. They should instead go directly to the babysitter's house or childcare centre for their background.

“Make sure the babysitter or childcare centre is registered with JKM and that they should display their registration certificate issued by PKMN as most of them are trained. In addition, parents can submit their recommendations or complaints directly to JKM.

“When meeting with the childcare provider, parents should check their background and interview them or ask various questions to test their knowledge and experience.

“If the answers given and the environment at the babysitter’s house or childcare centre are satisfactory, then only their services could be considered,“ adding that scouting for babysitters in the eleventh hour should be avoided.

For the record, Section 2 of Act 308 defines a childcare centre as a premise that receives four or more children under the age of four to be cared for a fee.