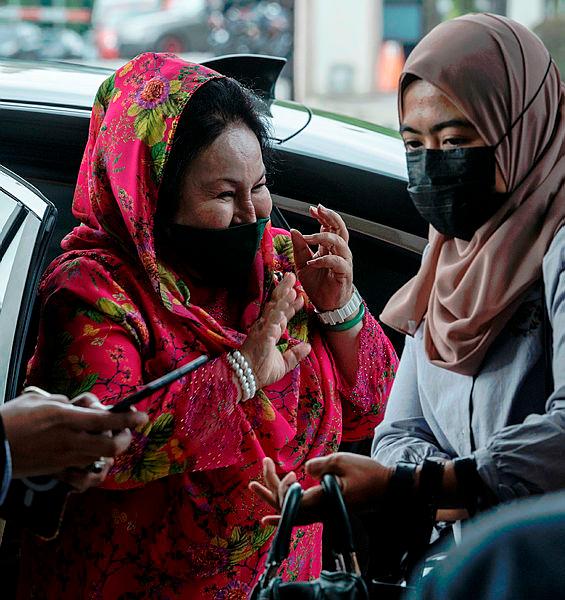 PUTRAJAYA: The Court of Appeal today ordered Datin Seri Rosmah Mansor(pix) to appear in court on Monday for the hearing of her appeal to nullify her corruption trial and to remove Datuk Seri Gopal Sri Ram as the lead prosecutor in the case.

This follows the decision of a three-member bench led by Datuk Hanipah Farikullah to withhold issuing a warrant of arrest against the appellant (Rosmah).

Justice Hanipah said the counsel for the appellant requested for the hearing to be adjourned to Monday as the appellant has not returned to Malaysia as ordered by the High Court through an order dated Oct 15.

She said the counsel for the appellant admitted that the failure by his client to appear in court today is in non-compliance of the High Court order.

However, justice Hanipah said the counsel for the respondent (Sri Ram) had raised serious objection to the conduct of the appellant in not complying with the court order for her to be back in Malaysia by Nov 21 and he strongly urged the court to issue a warrant of arrest for the breach of the court order.

“Having considered the above reasons, we are exercising our discretion to withhold issuing a warrant of arrest against the appellant at this juncture and would give an opportunity for the appellant to appear before us as undertaken by the appellant’s counsel.

“Therefore, as agreed by both parties, today’s hearing will be adjourned to Dec 6 for continued hearing,“ said justice Hanipah, who sat with judges Datuk M. Gunalan and Datuk Hashim Hamzah.

On Oct 15, the Kuala Lumpur High Court allowed Rosmah's application for the temporary return of her passport to enable her to go to Singapore to visit her eldest daughter, Nooryana Najwa, who gave birth to her second child.

Judge Mohamed Zaini Mazlan, in allowing Rosmah’s application, said the wife of former prime minister Datuk Seri Najib Tun Razak must return to Malaysia before or on Nov 21 and the passport must be returned to the court before or on Dec 6, 2021.

Earlier, Sri Ram applied for the court to issue a warrant of arrest against Rosmah for failing to appear before the court today and also asked it to revoke her bail for breaching the court order.

“We are not talking about children; we are talking about adults who know what their responsibilities and liabilities are. My only point is the order is not obeyed. If this had been a case of a normal citizen, an Ahmad bin Abdul, Muniandy or Ah Chong, it would have been different. I don’t know why it should be different with Rosmah binti Mansor and not Ahmad bin Abdul.

“We have to be guided by the court order. If people are going to ignore this then what is the point of making these orders? The natural order is a warrant of arrest must be issued and bail must be cancelled,“ he said, adding that Rosmah should not be treated differently from other accused persons or the public will lose confidence in the courts.

Rosmah's counsel Datuk Akberdin Abdul Kader then said they had written a letter to the Court of Appeal registry to notify that Rosmah will return to Malaysia on Dec 6.

Justice Hanipah, however, interjected by saying that the letter was only given to the bench 10 minutes before the proceedings started.

Rosmah's other counsel Datuk Jagjit Singh said he will take full responsibility for Rosmah’s absence and asked for an adjournment until Monday.

The lawyer said that there was a change in his client's travel plans after taking into consideration the newly introduced Vaccinated Travel Lane (VTL).

Justice Hanipah then asked if Rosmah had returned to Malaysia, to which Jagjit replied that his client was still in Singapore.

Rosmah is appealing against the High Court’s refusal to nullify her entire trial in an effort to be freed of all three charges and to remove Sri Ram as the lead prosecutor in the case.

On Oct 4, the Court of Appeal rejected Rosmah’s application to adjourn her corruption trial while waiting for the decision on the appeal.

Following the decision, Rosmah, 69, testified as a defence witness during the hearing held at the High Court on Oct 5. The trial is scheduled to resume on Dec 8.-Bernama