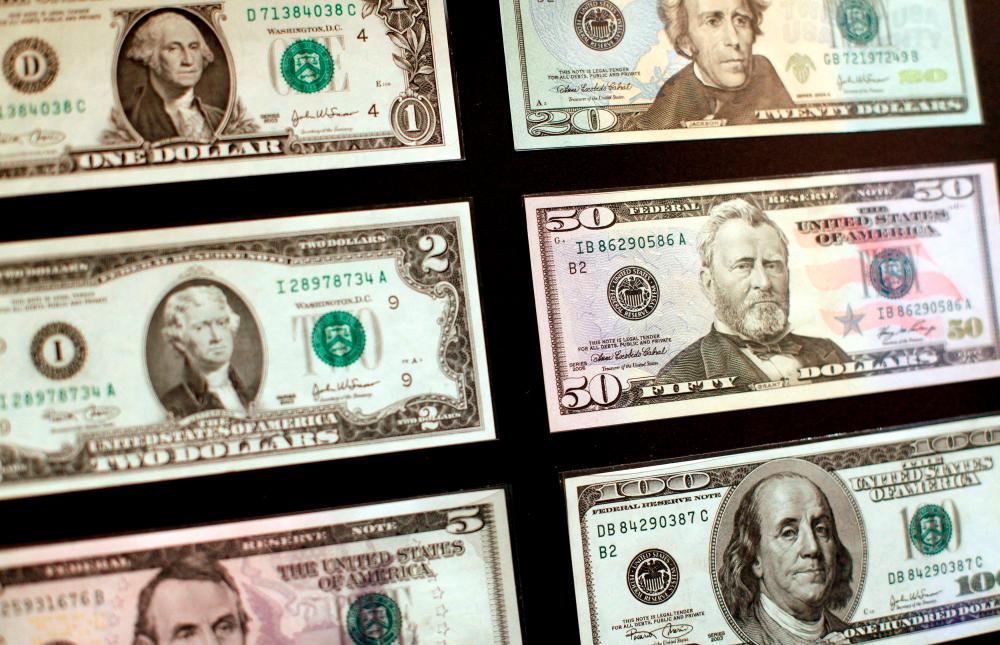 USdollar banknotes are seen at the Museum of American Finance in New York. With the dollar scaling new multi-decade highs, positioning for a pullback can be painful. – Reuterspix

NEW YORK: Some investors are growing concerned the dollar’s meteoric rise is setting the stage for a rapid reversal, which would bruise those who have sought refuge in the US currency in recent months.

Soaring US interest rates, a comparatively strong American economy and demand for a haven from wild gyrations in asset prices have lured investors to the dollar, driving it up about 22% against a basket of currencies in the past year.

Some investors worry the dollar trade has become excessively crowded, raising the risk of a sharp unwind if the case for owning the currency changes and investors try to exit their positions all at once.

“Positioning is crowded,” said Calvin Tse, head of global macro strategy, Americas, at BNP Paribas. “If we get a catalyst, the dollar can turn, and turn very aggressively,” he said.

International Monetary Market speculators held a net long US dollar position of US$10.23 billion for the week ended Sept 20. That is lower than a recent high of nearly US$20 billion in July but marks the third-longest streak since 1999 in traders holding bullish positions on the greenback, with 62 straight weeks of long positioning.

Barring a brief period of peak pandemic-related uncertainty, broad net options positioning data going back to 2014 shows US dollar long positions are the most stretched ever, according to Morgan Stanley.

Some 56% of participants in BofA’s global fund manager survey in September named being long the dollar as the most “crowded trade”, the third straight month the greenback has held that position in the survey.

Investors may have already had a taste of what a reversal could look like when the dollar index retreated nearly 3% over the course of two weeks, starting in mid-July, as some investors bet US inflation might be set to moderate enough to allow the Fed room to pivot away from its path of aggressive interest rate increases.

While a hotter-than-expected US inflation report in August dashed those hopes and sent the dollar higher, the dangers stemming from the crowded dollar trade have only grown, investors said.

“Undoubtedly, when you have a crowded trade, where you have investors all seeking the same thing, when perceptions do change, the reaction is a violent one,” said Eric Leve, chief investment officer at wealth and investment management firm Bailard.

In 2015 and 2009, the last two instances when the dollar index rose more than 20% during a one-year period, the index subsequently logged a two-month drop of 6.7% and 7.7%, respectively, once the greenback peaked.

While crowded positioning can aggravate any potential reversal for the dollar, it would take a big fundamental change to cause that reversal, investors said.

“When those three are all checked off, it provides us more of a runway to see the dollar enter a bear market, but I don’t see these happening any time soon,” he said.

While US interest rates are above those in many other economies, almost every major central bank, including the European Central Bank and the Bank of England, has increased rates as they step up their fight against high inflation, helping boost the allure of their battered currencies.

Any signs that US inflation could be easing might help revive expectations for a dovish pivot by the Fed, robbing the greenback of a crucial driving force.

A serious blow to the US economic outlook could also hurt the dollar, said Jack McIntyre, a portfolio manager at Brandywine Global.

The Fed's aggressive policy tightening has boosted worries that the US economy could be headed for a recession next year.

The world’s three largest economies – the United States, China, and the eurozone -– have been slowing sharply, and even a “moderate hit to the global economy over the next year could tip it into recession”, the World Bank said in a recent study.

“I think what weakens the dollar is increasing likelihood that the US goes into a recession, and that is not discounted in the dollar,” McIntyre said.

But with the dollar scaling new multi-decade highs, positioning for a pullback can be painful. “We have been fighting it a little bit, but it’s tough,“ he said. – Reuterspix 3.Macron blasts Biden subsidies at start of US state visit