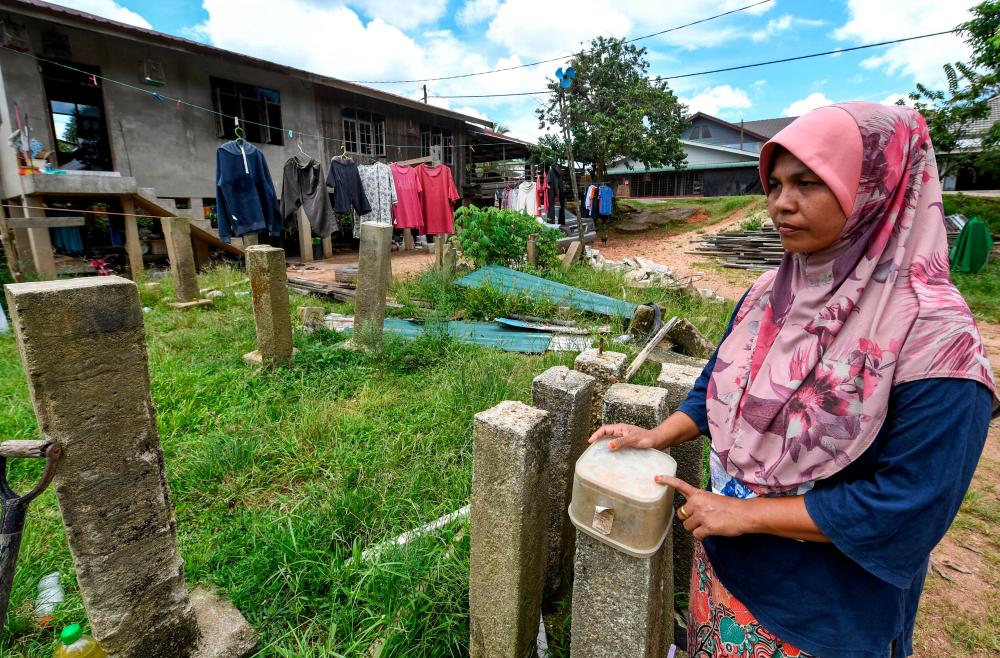 PASIR MAS: The owners of six houses that were swept away by flood waters in Kampung Tersang, Rantau Panjang here are appealing to the government to expedite the construction of replacement houses.

On March 1, Bernama reported that six houses were swept away by strong currents when the house owners were being transferred to the Sekolah Kebangsaan (SK) Tok Deh temporary relocation centre (PPS).

A house owner, Che Hasniza Che Omar (pix), 45, said the fear of a major flood that will hit the state again during the Northeast Monsoon in November, traumatises villagers.

“This is a valley and is at risk of flooding, the experience of my house being swept away last March is a traumatic one. Over the past few weeks, my family and I have never had a good night’s sleep for fear of another catastrophic event.

“And what is more worrying is the risk of a newly-built house being swept away by flood waters too,” said Che Hasniza when met by Bernama at Kampung Tersang, Rantau Panjang here today.

Che Hasniza said currently she and her children were staying at her in-laws’ house, Kamariah Latif, 70, which is located next to the site of the original plot. The house is now accommodating 10 occupants.

“Two weeks ago, the relevant authorities asked us to clear the plot where the new house is to be built and we are hoping that the construction work will start soon since the floods are rumoured to be bigger this year,“ she said.

Meanwhile, 78 year-old Mariam Mamat whose house was also swept away by flood waters said the house had 11 occupants including her children, daughter-in-law and grandchildren.

“I still remember returning home from the SK Tok Deh PPS. I almost fainted after seeing what was left of my house. Just the staircase, part of a kitchen and the toilet,” she lamented.

Fortunately, the plight of the residents caught the attention of Deputy Minister of Women, Family and Community Development Datuk Siti Zailah Mohd Yusoff who assured that all the victims will be receiving new houses as soon as possible.

“Originally, the budget to build the assisted living home was RM56,800 a unit, but after we had inspected we discovered that the houses were built in a low-lying area so we had to raise the foundation about 0.30 meters. A new evaluation would have to be done quickly.

“After re-evaluation and after taking into consideration that the area was still prone to flooding, we raised the level of the house to 1.83 meters at a new cost of RM79,000,” she said.

Siti Zailah who is also the Rantau Panjang MP said work on the new houses will start soon and that tenders have already been called.

“Work on the new houses will be carried out this year. Only a few matters like calling for tenders, contractors and insurance payments in pending.

“Work is also expected to take three months only. Therefore, we appeal to the house owners to be patient so that the new houses do not have the risk of being swept away yet again,” she said.

She also said the government was also paying rent for two other owners who were affected by the incident.

“The two owners currently renting are being subsidised between RM100 and RM350 for rental depending on the prevailing market value since the beginning of the incident until now. However, four other house owners who are staying at other houses are not being paid rental,” she added.-Bernama