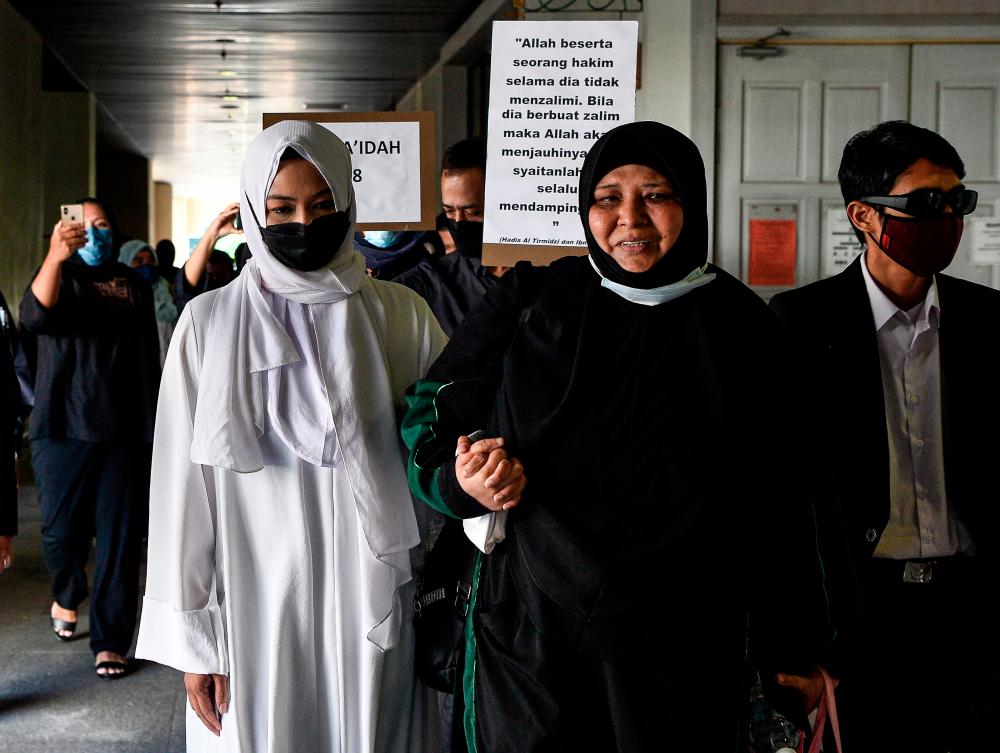 Emilia (left) at the syariah court in Kuala Lumpur on Monday. Her seven-day prison sentence caused an uproar among the public and non-governmental organisations. – BERNAMAPIX

PETALING JAYA: A senior lawyer has said the syariah court decision on Monday to sentence single mother of three, Emilia Hanafi, to seven days’ jail in Kajang Prison on account of her failure to comply with a court order to allow her ex-husband visitation rights, was justified.

The matter caused an uproar among the public and non-governmental organisations (NGO) after the sentence was meted out when she surrendered to the syariah court in Kuala Lumpur.

NGO and netizens claimed that her actions were “simple” offences. However, a senior lawyer, who declined to be named but was familiar with the details of the case, said the public should not just concentrate on the fact that she was sent to prison.

“In the six years before she was sent to jail, she had defied the court order many times,” he said, referring to the court order allowing her ex-husband Datuk S.M. Faisal S.M. Nasimuddin visitation rights to their three children every second and fourth week of the month.

The lawyer also said in any contempt of court case, the civil or syariah courts will look at all the facts and not just one aspect of it.

He also advised the public not to just take Emilia’s side but to look at the facts in totality.

The lawyer said those who claimed the syariah court was biased, are biased themselves for taking sides and referring to only one side of the case, adding that the syariah court would be the first to consider Emilia’s circumstances as a single mother.

The lawyer also questioned the motives of NGO, Sisters in Islam.

Meanwhile, lawyer Datuk Akberdin Abdul Kader, who represented Faisal, said when the custody application was filed in 2017 and a consent judgement was reached in 2018, both parties agreed that full custody would be given to Emilia and Faisal was supposed to get visitation rights every second and fourth week of each month.

“He was also allowed to spend time with the children during Hari Raya Aidilfitri and Aidiladha on rotation with Emilia.

“It’s the same for birthdays and equal days during school holidays, but not once has she allowed him to take them in the last six years.

“She has changed lawyers 27 times and would use all sorts of excuses to stop the children from visiting their father.”

Akberdin said several attempts to communicate with the children were also unsuccessful.

“Several mobile phones with SIM cards for the children to communicate with Faisal were provided, but none were activated and the children did not contact him.”

On the sentence itself, Akberdin said the judge had given clear grounds as to why Emilia was sentenced to jail.

“She cannot unilaterally change the visiting schedule, or decide when Faisal can visit his children.

“Neither can she take them out of the country without his consent,” he said, adding that Faisal had never forced his rights on the children. Instead, he always strived to make them more comfortable, but Emilia did not assist with this either.”

According to Akberdin, Faisal made several offers to settle the matter, but Emilia had never agreed to a mutual settlement, adding that his client plans to have the children’s mental health evaluated by a child psychologist.

“We don’t mind the mother choosing the child psychologist, as long as the person is court appointed. The children have gone through so much,” he said.

Emilia’s lawyer, Nizam Yahya, said his client was ordered by the syariah court to start her sentence from Monday.

“Forget who is right or wrong. You want access, the children should have equal access to both parents.

“It is important that the children see both parents, the only exception is if there is abuse or other such matters,” he said.