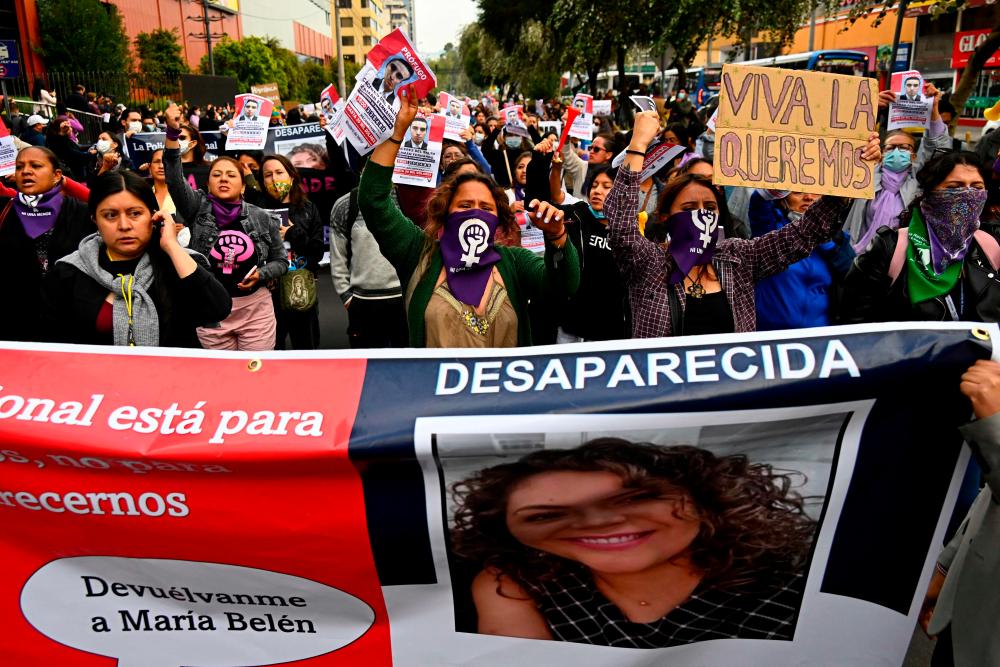 Relatives of the murdered lawyer María Belén Bernal, friends and feminist groups hold a demonstration after the announcement of the appearance of Bernal’s body, in downtown Quito, on September 21, 2022/AFPPix

QUITO: Demonstrators took to the streets in Ecuador on Wednesday to protest the death of a woman the government says was killed by her police officer husband, while union workers demanded the government pay what it owes the state social security system, threatening to escalate protests if there was no agreement.

Ecuadorians gathered outside police headquarters in Quito to protest the death of lawyer Maria Belen Bernal. She entered a police training school on Sept. 11, where her husband worked as an instructor, officials say, and police later found her body nearby.

Her husband, German Caceres, who the attorney general's office says is the main suspect in the killing, is on the run.

“Her murder will not go unpunished and all those responsible will be brought to justice,“ Ecuador’s President, Guillermo Lasso, wrote in a message on Twitter.

Demonstrations against the killing followed earlier protests led by union leaders, who argued that the Ecuadorian Social Security Institute's (IESS) financial situation has muddled health services for users and put the retirement pension system at risk.

Lasso has recognized that Ecuador's government owes IESS about $8.4 billion dating back to 2011, although some workers argue that represents a significant undercount.

The workers' march is the first since protests in June led by indigenous groups against the government's environmental and economic policies, which played out over more than two weeks and affected the country's oil industry.

Neither the government nor IESS officials responded to a request for comment.

Ecuador's government reached an agreement last week to disburse $300 million through December to apply to what is owed.

“We are not going to allow the government, under the argument that there are no resources, to try to hand over the administration of the IESS to private companies,“ said Nelson Erazo, president of the Popular Front, an alliance of social and union organizations.-Reuters