Disclosure of audios by MACC chief Latheefa: Legal or not? 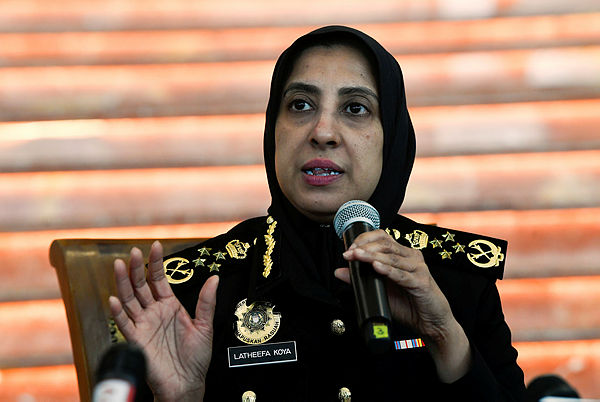 THE recent disclosure of a clutch of videos by MACC chief Latheefa Koya (pix) has predictably attracted wide public comments. Concerns raised include such issues as the right to privacy and right of an accused to a fair trial. In short, issues that deal with human rights, which are within the remit of this society.

Two matters are of direct relevance. First, the legality of the disclosure. Secondly, the issue of transparency.

The MACC is invested with the power to receive complaints and pursue investigations. It then can forward the papers to the relevant authority for further action. Which could be to further the investigations or to prosecute any alleged offender. In this case it is obvious that the MACC had embarked on investigations. For example, it confirmed the authenticity of the tapes; as well as the actors. It also made a preliminary assessment that the contents had potentially violated various laws including the Official Secrets Act, abuse of power, subverting the course of justice and corruption. Some involve its jurisdiction; others that of the police. Hence it passed the papers on to the police as well to continue with investigations for matters within their scope. So the MACC acted squarely within its statutory powers.

Some say that there should not have been any public airing of the tapes. And that the MACC should abide by the outcome of the investigations and present this video evidence in court if anyone is charged.

The issue then is: whether this disclosure by the relevant authority is wrong in law.

It is not unusual for the disclosure of evidence in relation to ongoing investigations by the authorities – even before investigations are completed and any charges levied. For example, the US Department of Justice publicly outlined in great detail the facts and evidence in relation to the 1MDB money laundering matter – before any action was instituted.

Granted that this is not normally done. But here we are dealing with matters of grave public concern – involving an erstwhile PM who holds the position of public trust. He is accountable to the country and its people. Any breach or compromise of that trust must necessarily be of immediate public concern and interest.

Such information ought not to be kept under wraps. Else it may suffer the fate of the earlier 1MDB scandal investigations. Which, as we now know, were scuttled by the investigating authorities at the behest of high authority. The then head of MACC was, if these tapes are to be believed and proved, complicit. As were many others. Essentially to stultify action against wrongdoing. But for the change of government, all alleged high crimes would have been dead and buried.

Surely that is not what we should wish to revert to. Opaque transparency which leads to subversion of justice.

This case must necessarily be distinguished from normal crimes – even heinous ones committed by individuals. Crimes such as murder and the like. These are essentially between private persons.

But in cases involving the wider public interest – involving the head of government, different considerations apply. Examples abound throughout the world. In the US in three recent cases where the president was alleged to have been involved in illegal activity, the entire facts of the investigations as they proceeded, were laid bare to the public. Recall the Watergate scandal involving illegal wiretapping at the behest of President Nixon – which led to his resignation. Also the Monica Lewinsky sex scandal involving President Clinton. And currently the ongoing disclosure of allegations against President Trump regarding his alleged conduct involving trading favours with the Ukraine president.

Nearer home, the public has routinely demanded answers from the investigating authorities on the disappearance of Pastor Raymond Koh, Amri, Ruth and Helmi.

>> Nature of the alleged wrongdoing

The alleged wrongdoings are huge. First, subverting the course of justice. Seeking to cover up a crime by manipulated contrivances – such as creating evidence to justify an alleged wrong is a grave crime. It is an offence separate and distinct from the 1MDB or SRC criminal prosecutions. It is like this. An accused seeks to tamper or subvert witnesses or evidence in a case by asking them to lie or create false documentation. This is after a prosecution has commenced. Law reports are studded with successful prosecutions in such cases.

Then there is a case of seeking favours from the head of another country. Favours given must be returned. This could well impact the country’s sovereignty. It is in this context that the spectre of national security was raised by Latheefa. Note that Trump’s impeachment proceedings were commenced precisely on this national security concern.

The disclosure by the DPP seconded to MACC from the AG’s chambers (later made its chief) of ongoing investigations to the alleged wrongdoer compromises the integrity of the MACC and the government.

Latheefa’s public disclosure of these alleged offences now insulates them from any manipulation. No one can now surreptitiously interfere. The public will be the effective gatekeepers.

As indicated, the facts disclose offences that are distinct from the ongoing prosecutions. Hence no question of sub judice arises. Sub judice arises when disclosure will prejudice the mind of the judge. Our judges are trained to decide cases on the facts as adduced in court. Any failure to evaluate the evidence and consider with cogent reasons the evidence presented by an accused is routinely corrected by our appellate courts.

>> Is reliance on the tapes legal?

Quite obviously, the tapes have been provided by a whistleblower. Any person who discloses any alleged crime to the authorities such as the police or the MACC is protected by the Whistleblower Protection Act 2010. He or she is entitled to confidentiality; and is also protected against any retaliatory action. Latheefa is hence justified in not disclosing the source of the videos as yet. Interestingly, Trump’s efforts to get the name of the whistleblower who provided tapes of his conversations relating to the Ukranian president has been consistently refused by the House of Representatives.

Indeed this is an invaluable right that ought to be protected – although it is noted that there is no such right in the law of tort recognised as yet in Malaysia. In any event the right to privacy has to yield to the wider public interest in upholding the rule of law. The right to privacy cannot prevail to prevent the disclosure of a crime. Lorraine Osman’s efforts to prevent the disclosure of evidence (including of monies held in lawyers’ accounts) was rejected by our courts as there is no protection or privilege from disclosure of any communication made in furtherance of any illegal purpose or of a fact showing that any crime or fraud has been committed: AG Hong Kong v Lorraine Osman (1993).

Significantly, taped conversations of potential terrorist acts have been relied upon routinely in curbing such acts by almost all functioning democracies. In any prosecution, the accused can question the authenticity of the tapes and the purport of its contents.

Finally, aspersions have been cast on Latheefa’s motive for the disclosure. Including a tie-up with a pending by-election. This is a red herring. One should address the legal issues; which this statement seeks to do.

It is understandable that concerns have been raised for this rather unusual and dramatic disclosure of the tapes. But given its legality as explained, should not we applaud the MACC for a disclosure of acts that seem to compromise the trust and fiduciary duty placed in our leaders? After all, transparency, which leads to accountability, is pivotal to the Rule of Law.

The National Human Rights Society, Hakam, issued the above press statement on the legality of MACC chief Latheefa Koya’s disclosure of the audio clips.