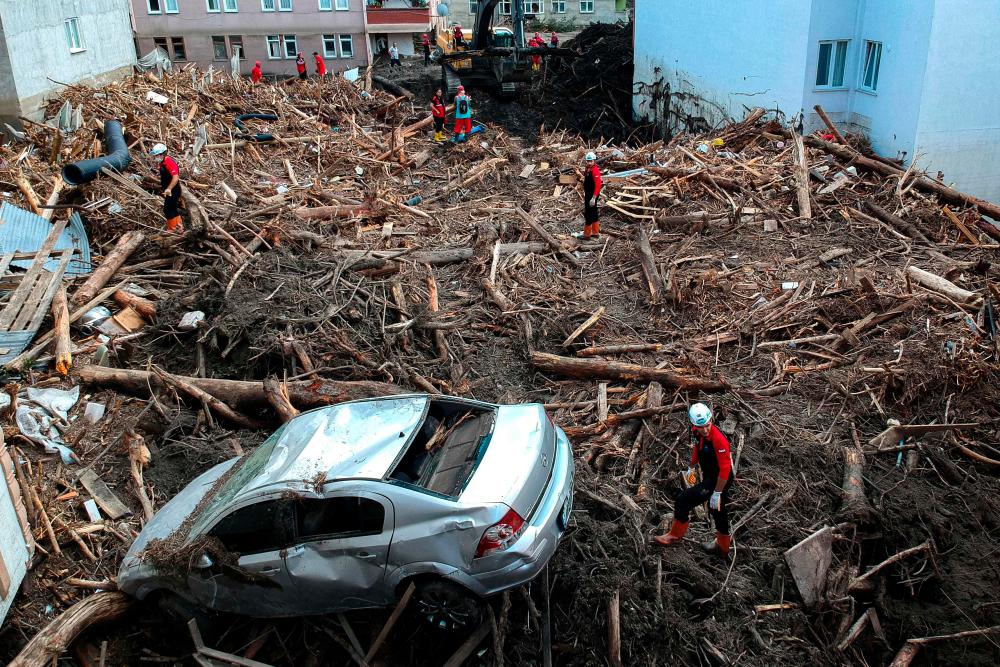 FROM the very recent destructive floods occurring at the same time in several parts of the world – China, India, Nigeria, Belgium, Austria and Italy, etc. – to the forest fires, also occurring at the same time in Turkey, Greece, Italy and the US, the signs are ominous: years of neglect and lip service on issues of climate change are taking its toll on the world population and the environment.

This increased frequency of extreme weather events is the cumulative effect of decade-long activities when individuals or for-profit corporations continuously burn massive amounts of fossil fuels and cut down trees, emitting excessive greenhouse gases (GHG) to the atmosphere, eventually leading to the rising global average temperature, currently about 1.2°C above the pre-industrial average.

In fact, these activities which are detrimental to the environment have caused epidemics when the habitat and ecosystem of an animal virus are destroyed, resulting in the mutation of the virus to adjust to a human habitat, thus causing the transmission of a virus from animals to humans.

The latest Intergovernmental Panel on Climate Change (IPCC) Report revealed climate change would increase in all regions in the coming decades.

For a 1.5°C of global warming, there will be increasing heat waves, longer warm seasons and shorter cold seasons.

In the end, this would increase the likelihood and severity of extreme weather events as warmer air holds more moisture.

While Malaysia appears unaffected by the most extreme weather events such as earthquakes, hurricanes and forest fires, it remains vulnerable to the threat of floods, landslides, haze and water pollution.

Up until August 2018, Malaysia has experienced 51 natural disaster events in the last two decades where 281 people died, over three million people were affected, and disasters caused nearly US$2 billion (RM8 bil) in damage.

The highly transmissible Delta coronavirus variant that is expected to affect more than 130 countries globally would exacerbate the effects of extreme weather events along the entire food supply chain, elevating levels of food security and slowing the delivery of humanitarian assistance.

This has already happened in China whereby the recent flood in the central province of Henan, where the supply chains for goods ranging from cars and electronics to pigs, peanuts and coal, were badly affected.

But what is more important for Malaysia, the extreme weather events currently faced by many countries could be a harbinger the coming wet season at the end of the year could be the worst flood.

Hence, preparation should start from now to lessen the tragic impact of the wet monsoon flood in terms of loss of lives and displacement of people.

For instance, the Works Ministry could improve the drainage system in flood-prone states like Kelantan, Terengganu and Sabah, plan for more evacuation centres at high-rise places that take into account the spread of Covid-19 in terms of ventilation and physical distancing, and ensuring the population in these states are fully vaccinated.

One of the less-talked topics related to climate change is urbanisation. Rapid urbanisation is bringing with it a variety of undesirable environmental effects.

In fact, UHI has become a regional issue for Greater Kuala Lumpur, as a number of studies reported elevated air temperature in highly dense urban areas compared with the rural peripheries.

Due to a lack of climate-resilient infrastructure and effective warning and evacuation systems to cope with the extreme weather events, Malaysia ranked second last (47 out of 48 countries) in terms of climate resilience under the Swiss Re Institute’s report on “The economics of climate change: No action not an option” in April 2021.

The report also revealed a baseline scenario of a 2-2.6°C temperature rise, emerging economies in hot regions and oil producers would be most affected by rising temperatures over time.

This means Malaysia could lose 33% to 36% of its gross domestic product (GDP) by 2048 due to a reduction in labour and agricultural productivity.

When the more severe 3.2°C temperature scenario happens, the potential output loss for Malaysia could increase up to 45% of GDP.

Here are some low-carbon initiatives that could be implemented to address the recurring losses associated with extreme weather events:

Installing pedestrian walkways or cycling pathways in place of roadways for promoting not more than a 15-minute walking or cycling distance for the citizens to enjoy nature, get fit, relax and release stress through cycling and jogging activities;

Converting empty spaces into urban farms to tackle food security. With an urban farming structure inside a building, stressed-out individuals and the elderly can enjoy a quality indoor environment and well-ventilated indoor spaces;

Encouraging industrial players to use renewable energy instead of fossil fuels to reduce air pollution and respiratory infections by providing them small grants;

Introducing reforestation to regulate water flows, act as barriers against storm surges and protect against erosion and mudslides; and

Launching budgetary reforms with a gradual increase in energy taxes or carbon pricing.

However, a whole-of-government and a whole-of-society approach would be required to accelerate Malaysia’s transition into a low-carbon economy.

For instance, the ministry could develop disaster-proof infrastructure to protect individuals and communities against natural hazards besides generating employment opportunities.

Moreover, the federal government perhaps could allocate funding to conduct research and development in the area of climate change adaptation with the state governments and local authorities.

Federal-state coordination is essential to meet the environmental goals under the national strategies, blueprints or road maps while providing social safety nets for vulnerable communities.

According to the International Energy Agency, investing US$1 trillion annually in green energy could add 1.1 percentage points to global economic growth and create new jobs besides reducing GHG emissions by 15% over time.

To reimagine sustainable cities that are fit-for-purpose in the post-Covid-19 world, the current administration needs to take concrete actions focused on the main intersections between climate change and any pandemic.

Jamari Mohtar and Amanda Yeo are part of the research team of EMIR Research, an independent think tank focused on strategic policy recommendations based on rigorous research. Comments: letters@thesundaily.com