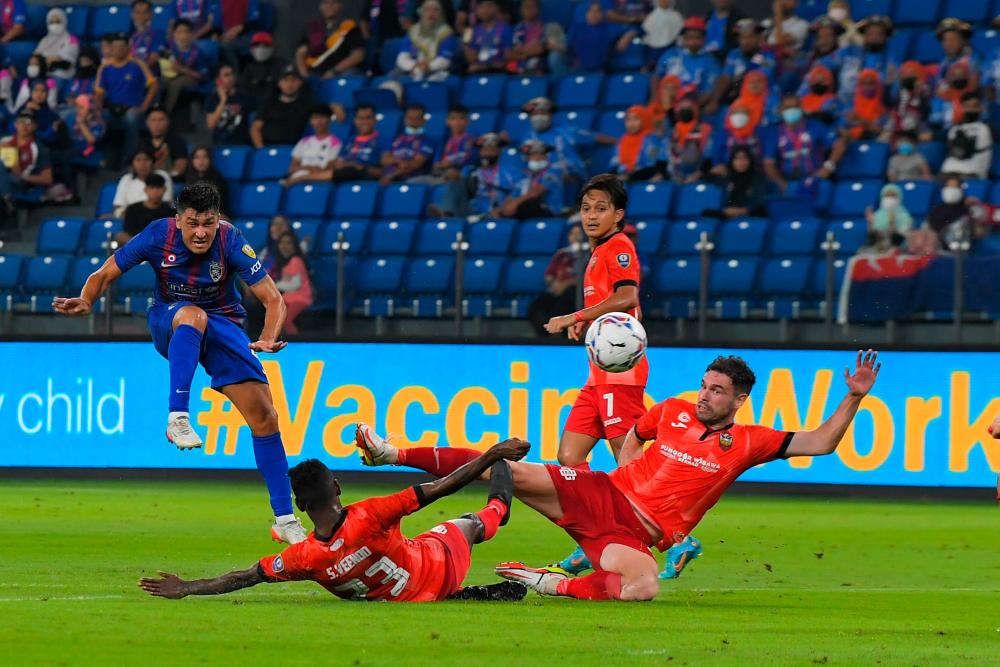 KUALA LUMPUR: Malaysia League giants Johor Darul Ta’zim (JDT), as predicted, qualified for the quarterfinals of the FA Cup after cruising to an easy 3-0 win over Sarawak United yesterday.

In the match played at the Sultan Ibrahim Stadium in Iskandar Puteri, JDT’s Fernando Forestieri scored a brace, with the Southern Tigers opening the score as early as the 6th minute through midfielder Muhammad Nazmi Faiz Mansor’s freekick.

Forestieri scored the next two goals for JDT in the 15th and 43rd minutes with the 3-0 scoreline remaining intact until the end of the match.

Meanwhile, Sri Pahang FC got through into the last eight after also securing a 3-0 win over FAM-MSN Project Squad in a match played at the Darul Makmur Stadium in Kuantan.

The hosts opened the score in the sixth minute through a Mahmoud Za'tara header before he added his second with another header in the 28th minute off a Manuel Hidalgo cross.

Sri Pahang confirmed their win with a Shah Nizam Nadzir strike in the dying minutes of the match.

In another tie, Penang FC thrashed Perak FC 4-1 at the Perak Stadium in Ipoh.

Penang scored first in the second minute through Hilal El-Helwe before adding another through an own goal by Perak’s Muhammad Aiman Khairul Yusni in the 29th minute.

Perak pulled one back in the 69th minute through a Muhammad Aqil Hilman Danial Roslan goal but Penang made sure they notched the win with two quick goals in added time courtesy of Hilal and Muhammad Adib Abdul Ra'op.

In another match, Melaka United also qualified for the last eight after securing a narrow 2-1 win over Petaling Jaya (PJ) City FC at the Hang Jebat Stadium in Melaka.

Sony Norde struck first for Melaka in the 11th minute but PJ City FC drew level in the 50th minute through a Darren Lok goal.

Adriano Narcizo, however, scored Melaka’s second in the 55th minute which ultimately was good enough to secure the team’s passage into the last eight.-Bernama