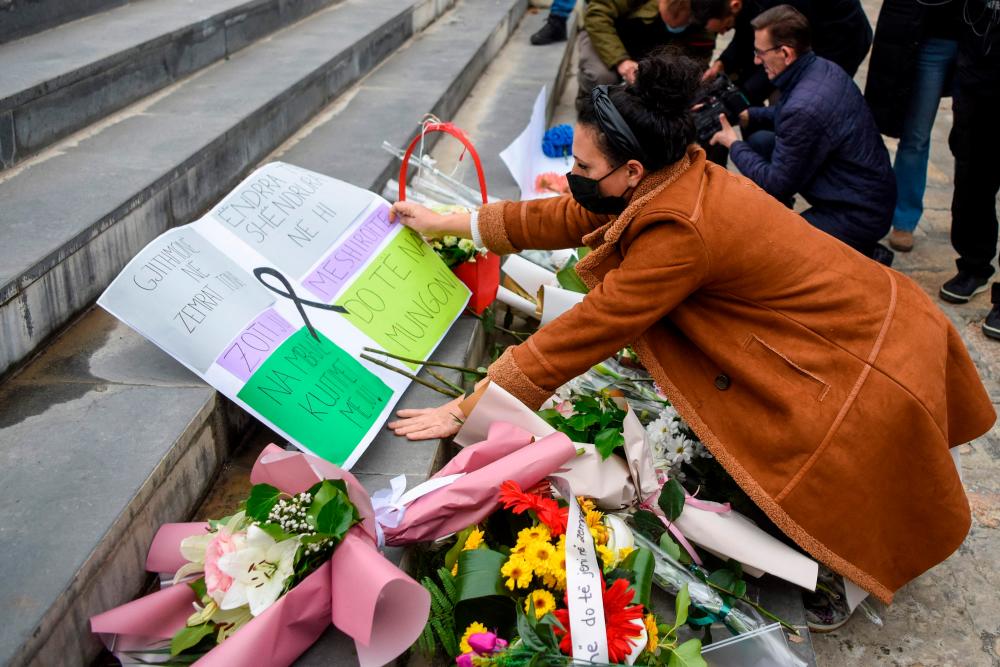 A woman lays flowers as students pay tribute to the students from their elementary school who died after a tourist bus carrying citizens of North Macedonia caught fire and crashed in Bulgaria, in Skopje on November 24, 2021/AFPPix

SOFIA: Grief-stricken relatives on Wednesday mourned 45 people killed in a fiery bus crash in Bulgaria, as survivors recounted the “horror” of escaping the burning tourist coach.

The crash is Bulgaria's deadliest, and the worst road accident in Europe in a decade, plunging the country into mourning, along with North Macedonia where many of the young victims were from.

Officials believe the bus crashed into the highway rails and caught fire south of Sofia early Tuesday while travelling from Turkey to North Macedonia.

Only seven survived after they broke a window and escaped.

A passing truck driver who assisted the victims at the scene said he saw a man -- believed to be a Belgian who had managed to escape the inferno -- trying to rescue his son.

“One of the men was screaming that his son is inside: ‘Son, son!’ He even tried to return to the bus, into the flames to save his son but I stopped him,“ he told Nova TV.

Many of the passengers from North Macedonia were ethnic Albanians aged 20 to 30 and included a dozen minors with the youngest fatality four-year-old twins.

Investigators are still probing what caused the accident and are working to identify those who perished, a difficult task leaving relatives waiting in anguish.

A list published by North Macedonia authorities on Wednesday listed seven survivors, and they said 52 passengers were on the bus.

Initially they said 46 people had died.

One of the survivors, Lulzim Sulejmani, recounted how the bus hit something on the right, the wheels burst and the fire spread before the bus moved left and came to a halt.

“There was a lot of smoke... People started to throw up, scream, like in a horror movie,“ the 26-year-old from Presevo, Serbia, told TV Klan Macedonia from his Sofia hospital bed.

“I managed to escape because I took the hammer from the bus and broke the glass. I took my fiancee and five more people.”

His fiancee, Medina Lutfi, 25, said she also jumped out the window.

“I was sleeping and suddenly I heard fellow passengers crying and screaming,“ Lufti said.

“There was black smoke, an explosion like a bomb... I heard children crying, there were a lot of children,“ Lutfi said.

Zulejha Jasharovska, at 16 the youngest survivor, told North Macedonia television Alsat M from her hospital bed that she could not remember how she got out of the bus as she lost consciousness.

The bus -- registered with the Besa Trans tourist agency, which organises tours to Istanbul -- was the last of four from the same company that travelled together, according to reports.

About 20 of those involved in the accident were from Studenichani, a 17,000-strong municipality near Skopje, including a registrar and his wife, as well as a teacher and her daughter.

“It is very hard... We are trying to comfort the families,“ mayor Azem Sadiku told the Sloboden Pecat newspaper.

In Skopje, hundreds of Ismail Qemali elementary school pupils and their teachers gathered for a march to mourn five fellow students who lost their lives.

“We are very emotional. We visited the families before coming here. It was very difficult. Everyone cried,“ teacher Metush Memedi said.

In Sofia too, people came to pay respect to those who died in the crash, laying flowers outside the North Macedonia embassy.

“The poor children,“ one woman sobbed.

Bulgarian Interim Prime Minister Stefan Yanev declared Wednesday “a day of mourning” as he led a minute of silence at the start of a government session.

Pope Francis expressed his “heartfelt solidarity with all those affected by this tragedy,“ the Vatican said in a statement.

Bulgaria has a history of deadly bus crashes, but Tuesday's disaster was the worst, according to officials.

It was also the deadliest in Europe in the past decade.

Road accidents in Bulgaria have often been attributed to poor road conditions, outdated cars and speeding.-AFP