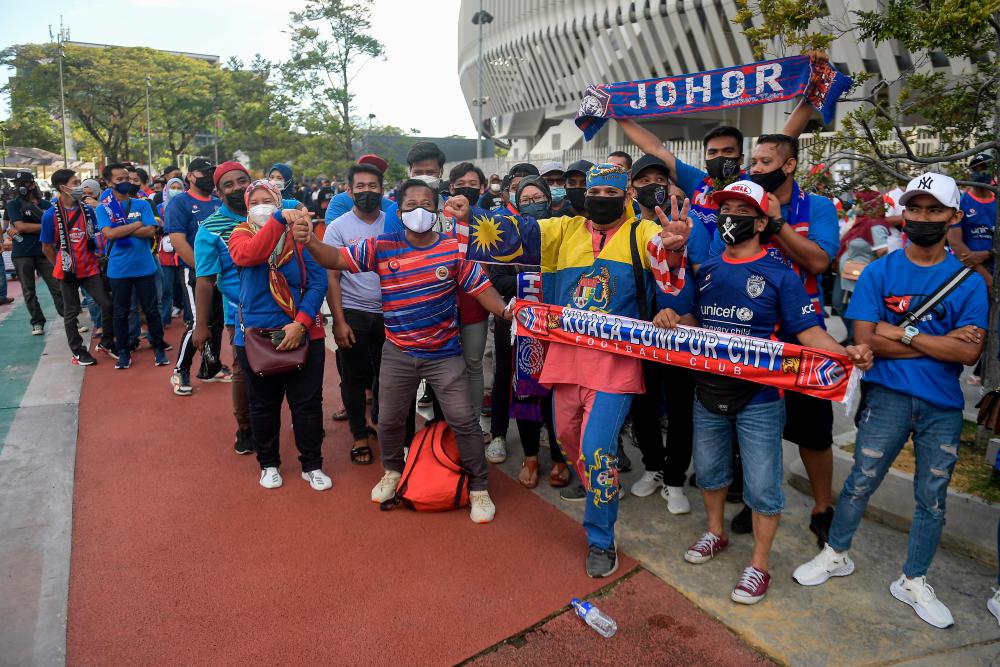 KUALA LUMPUR: The Malaysia Cup final between Kuala Lumpur (KL) City FC and Johor Darul Ta’zim (JDT) tonight promises to be a spectacle for local football fans, especially after the 2020 edition was cancelled following uncertainty due to the Covid-19 pandemic.

The final match of the 100th Malaysia Cup anniversary at Bukit Jalil National Stadium here will kick off at 9 pm.

As of 5 pm. a carnival-like atmosphere has enveloped the area, with many activities and events taking place around the stadium grounds, and various types of merchandise and food on sale as fans from both teams continue to make their way there.

The majority of JDT supporters were dressed in black and sporting stripes of red and blue, symbolic of the Southern Tigers’ logo, while KL City FC supporters are decked in red in solidarity with the hosts’ jersey colour.

The gates of the stadium were opened to fans since 6 pm.

JDT fan Fikri said he was pumped up to have the opportunity to watch the Malaysia Cup final in the stands after last season’s cancellation.

“I can’t wait and it really is different because it’s the final. It’s been so long since we’ve been in the stands watching and this is the first JDT final since 2019,” the youth from Batu Pahat said.

A student who wanted to be known only as Wawa, said he was willing to take a brief holiday as he didn’t want to miss out on the opportunity of watching his favourite team in action together with his family.

“We have come from quite a distance...from Muar, and we are so excited. I nearly couldn’t get to come but Alhamdulillah I managed to, finally,” he said, adding that he expects JDT to edge KL City 3-1.

Meanwhile, Azmi, a KL City FC fan, was hopeful that the results would be in favour of his team and end the 32-year wait of seeing the Malaysia Cup trophy return to the country’s capital.

“Of course, JDT are the favourites on paper but our team has never lost in Kuala Lumpur. At the very least, it should serve as a reminder to JDT,” the 33-year-old civil servant from Cheras said.

Checks by Bernama revealed that compliance of the standard operating procedure (SOP) around the match venue by fans of both teams were satisfactory.

Enforcement officers were seen around the stadium while traffic personnel had begun managing the traffic flow at major roads and intersections heading to the stadium.

JDT are two-time Malaysia Cup champions, winning in 2017 and 2019 since its founding in 2013, while KL City FC are making their debut in the Malaysia Cup finals since being established last year.-Bernama