Feature: Hiroshima survivor hopes her generation last to suffer through such cruel experience 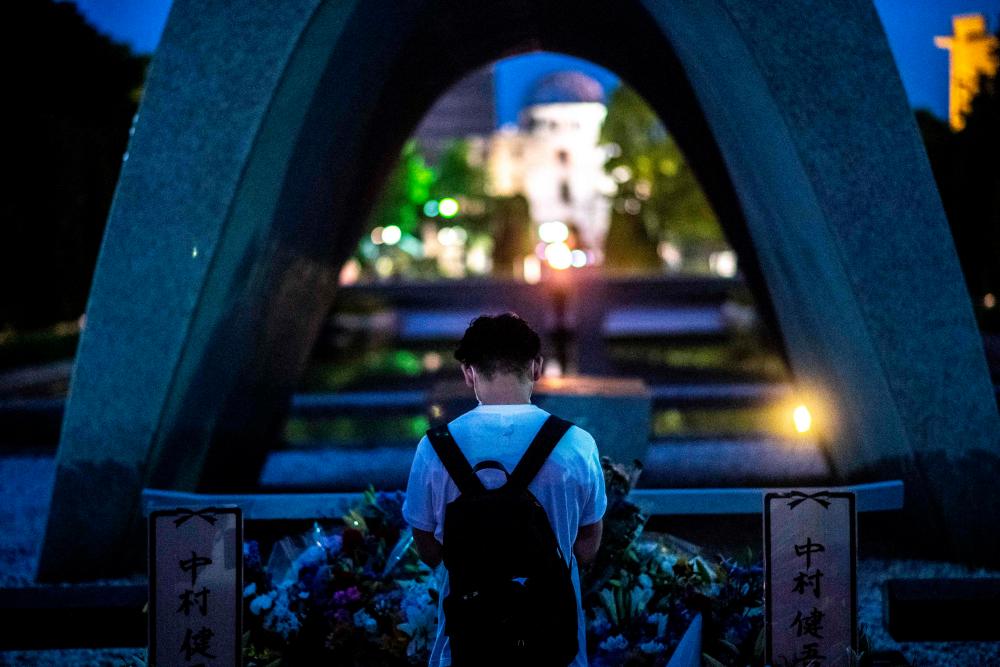 Visitors pray for the atomic bomb victims in front of the cenotaph at the Hiroshima Peace Memorial Park in Hiroshima early on August 6, 2022 to mark 77 years since the world’s first atomic bomb attack/AFPPix

WASHINGTON: Hiroshima survivor Toshiko Tanaka, 83, of Japan, on the 77th anniversary of the bombing told Sputnik she wants her generation to be the last to suffer through the type of experience wrought by a nuclear weapon.

On August 6, 1945, the US dropped an atomic bomb on Hiroshima that instantly killed 80,000 Japanese, mostly civilians. Three days later, the United States dropped another atomic bomb on Nagasaki, killing some 40,000 people, which led to the Japanese surrender on August 15. The total death toll eventually reached 355,000 due to the radiation fallout.

The United States is the first and only country to use nuclear weapons in a war. The attacks came not long after testing, which took place on July 16, 1945, when the United States detonated the world’s first nuclear device in Alamogordo, New Mexico.

“I want (that) we will be the last to have suffered such cruel experience,“ Tanaka said. “This inhumane weapon should never be used on anyone in the world.”

Tanaka, who now works as a cloisonne enamel artist, said she was a six-year-old first-grade student and on her way to school the moment the United States dropped the atomic bomb on Hiroshima.

“All of a sudden, I heard someone said ‘Enemy plane! B29!’ I looked up (at) the sky and saw two airplanes,“ Tanaka said. “Then I was struck by tremendous light and everything around turned to be white. I couldn’t see anything. I got burns on my head, left neck, back and right arm. Dust blew up... the blast covered over the sky. It became pitch dark around me like a dark night.”

Tanaka was located about 1.5 miles away from the blast of the atomic bomb, but she recalls the giant mushroom cloud that suddenly towered over the city and her mouth being filled with dust from the explosion.

“I still remember that weird taste, feeling a severe pain of burns,“ Tanaka said. “I finally made it home but my house was totally destroyed. It was fortunate that my mother was alive. She saw me but she didn’t think it was her child because my appearance was completely changed.”

Tanaka said she was unable to get treatment for her injuries from the explosion because hospitals were destroyed and doctors were killed in the bombing.

“People’s life or death that time was decided by fate and physical strength,“ Tanaka said.

Fate played a role in Tanaka’s family’s survival as well. She said her family lived in a house near the site of the bomb blast but had moved to a home nearly two miles away about a week before the attack on August 6.

The day of the bombing, Tanaka’s aunt, who lived with her family, left the house but never came home and her body was never found, and the entire family of a relative was killed in the bombing as well, she said.

Six years after the Hiroshima bombing, Tanaka said she started to suffer from the effects of radiation damage. She developed an abnormal number of white blood cells, swellings came out in her mouth and throat, and she experienced fatigue and dizziness for a long time. Many other survivors Tanaka knew eventually passed away from leukaemia, she said.

“A nuclear weapon causes a huge damage when it is used and continuously kills more and more people afterwards,“ Tanaka said. “It is a major difference from conventional weapon.”

Tanaka was severely traumatised by the bombing and was unable to talk about the experience for a long time. But 13 years ago, she decided to open up after realising she has a responsibility to share her story in order to try to make a peaceful world free from nuclear weapons.

However, she noted, more than 13,000 nuclear warheads exist in the world. Hiroshima and Nagasaki are not past history – these types of events remain a threat and could happen today, she warned. Nuclear weapons do not help maintain world peace, Tanaka said, adding that they would only bring the annihilation of the entire planet.

Tanaka said she believes it is an urgent necessity to get nuclear powers to join the Treaty on the Prohibition of Nuclear Weapons, but she also understands it would be a difficult decision for the United States, Russia and China to do so.-Bernama