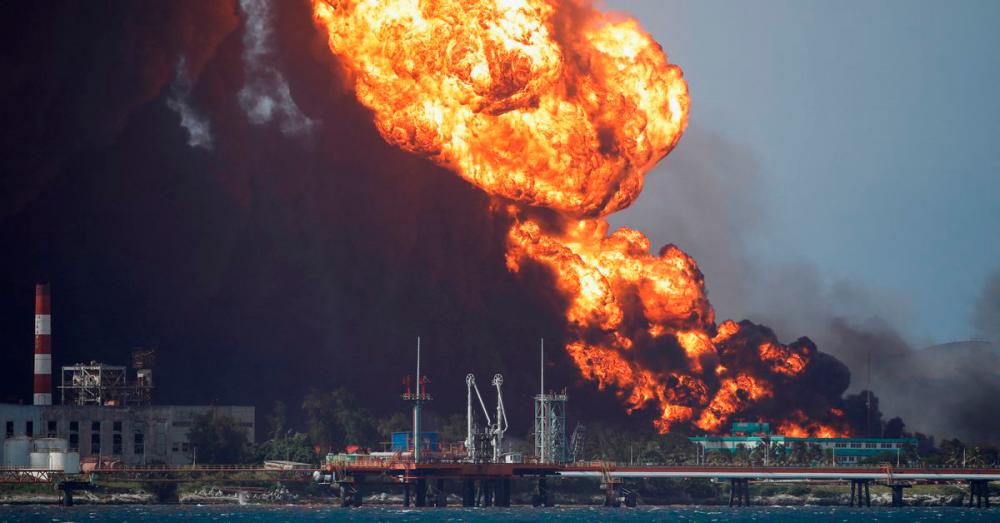 Huge columns of fire rose into the sky and thick black smoke bellowed all day, darkening the sky as far away as Havana. Explosions rocked the area just before midnight as one tank collapsed and again at noon as another imploded.

One firefighter has died and 16 people were missing, all from Saturday’s explosion at the second storage tank. A fourth tank was threatened, but had not caught fire. Cuba relies on oil to generate much of its electricity.

Cuba had made progress fighting off the raging flames during the weekend after drawing on help from Mexico and Venezuela, but late on Sunday the fire began spreading from the second tank, which collapsed, said Mario Sabines, governor of the Matanzas province, about 60 miles (130 km) from Havana.

Matanzas is Cuba’s largest port for receiving crude oil and fuel imports. Cuban heavy crude, as well as fuel oil and diesel stored in Matanzas, are mainly used to generate electricity on the island.

Sabines said flames spread like an “Olympic torch” from one tank to the next, turning each into a “caldron” encompassing the area. Tackling the situation was “complicated” as three tanks were covered with flames and billowing black smoke.

Cuban state-run television has covered the unfolding disaster live since Saturday and President Miguel Diaz-Canel has been a constant presence there, highlighting the economic and political importance of the situation.

The Communist-run and heavily U.S. sanctioned country is all but bankrupt and blackouts and shortages of gasoline and other commodities already had created a tense situation with scattered local protests following last summer’s historic unrest in July.

At noon on Monday, authorities announced the country’s most important power plant, located less than a mile from the fire, had been shut down due to low water pressure in the area.

The power grid depends more than 90% on local and imported fuel. Jorge Pinon, director of the University of Texas at Austin’s Latin America and Caribbean Energy and Environment said the fire threatened both.

“The key questions now are where Cuban crude oil production will go to generate fuel for electrical use as it is only connected by pipeline to Matanzas,“ Pinon said, adding the facility has an installed capacity of 2.4 million barrels.

A tanker carrying Russian crude to Matanzas, identified by Refinitiv Eikon monitoring service, is unlikely to be able to discharge next week even if docks are not affected by the fire, because of possible damage to tanks, pipelines and valves, analysts said.

Since Matanzas is the only terminal with capacity to receive large vessels, Pinon said, the tanker might be forced to transfer its cargo via ship-to-ship operations so the crude can be refined at the Cienfuegos or Havana refineries, “but it is not clear Cuba has the capacity to do that”.

Residents expressed fear that the crisis will worsen as the hottest months of the year bear down.

“Oh my God, no lights and no gas, that is what this means,“ Havana resident Pia Ferrer exclaimed in an upscale neighborhood of Havana. -Reuters