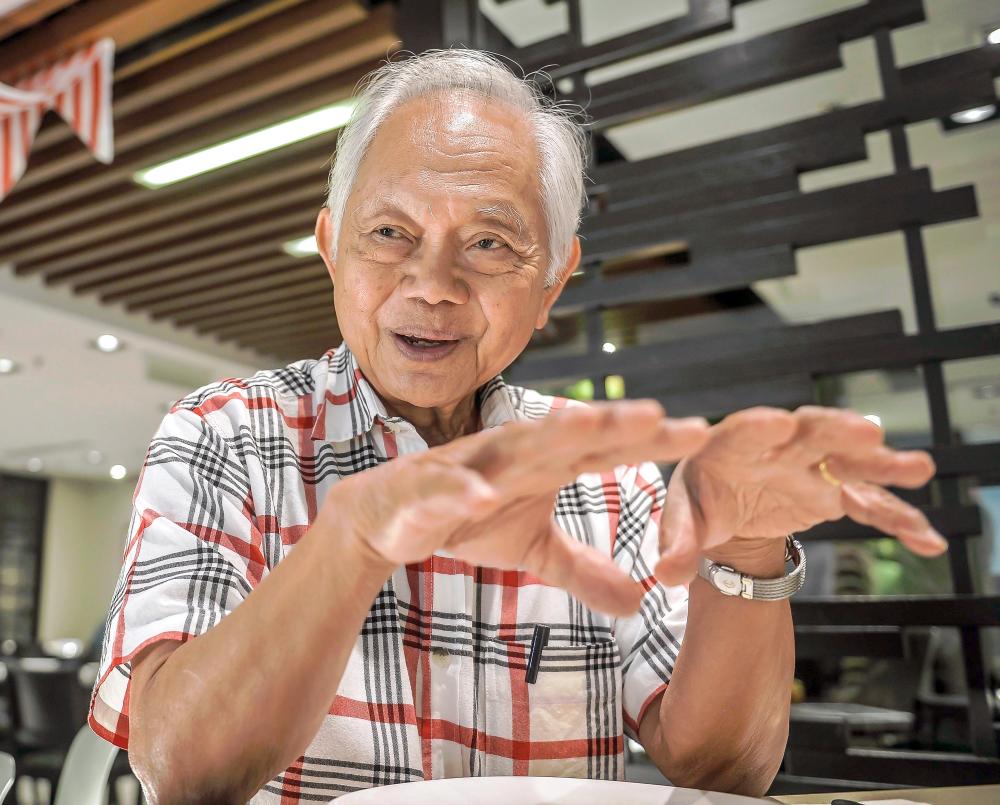 Leo says the education system should present a more balanced view of the different cultures in Malaysia. – ADIB RAWI YAHYA/THESUN

He was also the secretary-general of the Sarawak National Party.

“I’ve never aimed nor dreamt of being a politician. I never thought much of ambition, and only wanted to live an honest and productive life,” he told theSun during an interview at his favourite restaurant in Bangsar.

Among historians, he was known as a rising star after his appointment to the Sarawak Cabinet as minister for Local Government in 1976. He still keeps abreast with the social happenings and developments in his hometown in Kanowit.

He said even after 59 years since the formation of Malaysia, there is still a need to increase understanding of the cultural ties between the different communities in Sarawak and Peninsular Malaysia.

He cited the issue of religious practices in Sarawak and Sabah.

“The people practise whatever religion they believe in. They may be Muslims, Christians, Buddhists or practise traditional beliefs. Freedom of religion is well-recognised and practised there.

“From the perspective of Sarawakians, we sometimes feel that a greater appreciation of our multireligious society is necessary. We get the impression that in the peninsula, Islam is given greater importance over other beliefs, but the fact is that people should respect and appreciate our differences in terms of religion, culture and opinions.

“While there is nothing wrong with speaking about one’s religion, one must not belittle other religions in the process,” he added.

“There was less emphasis on religion during my time in the Cabinet. One of the main concerns for people like me is the increasing Arabisation of Malaysian society. I use this phrase in a considered way because I don’t think, from the Sarawakian perspective, it was meant to be like this.

“Malaysia was meant to be multiracial and diverse in its richness. Now, one senses the increasing pressure of religious fervour and moral policing which, to those like me, can only be described as ‘uncomfortable’.”

Leo advocates a review of the education system, which he says needs to present a more balanced view of the different cultures in Malaysia.

“It’s important to have an overall review of how our school system is operating. The issue of multiculturalism is increasingly more difficult to manage.”

He added that among comments made by politicians and leaders in Sarawak and Sabah was a call for more autonomy.

“(This means) allowing them to have a greater say in managing their states. This is a reaction to the over-dominance of a particular school of thought, where one religion and even racism seems to be increasing in Peninsular Malaysia,” he said, adding that it is time for the two states to be given more authority over their affairs.

Leo lauded the fact that Sarawak has made moves to allow English to be used as an official language in schools and among civil servants.

“It’s an excellent move that will make Sarawakians more competitive internationally. Sarawakians should be able to decide what is in their best interest,” he said, adding that Sabah and Sarawak are equal partners with the peninsular and not mere states in the Federation.

“When people in Sabah and Sarawak talk of MA63, part of it is a call to recognise what was provided for within the agreement, as some provisions may have been overtaken by changes through amendments to various laws since 1963. People are concerned over this.”

In conjunction with Malaysia Day, Leo called for more open discussions to define national unity and a Malaysia that includes the cultures, traditions and beliefs of all Malaysians.

“This is what is required for us to move forward and become one people in the true sense of the word.”