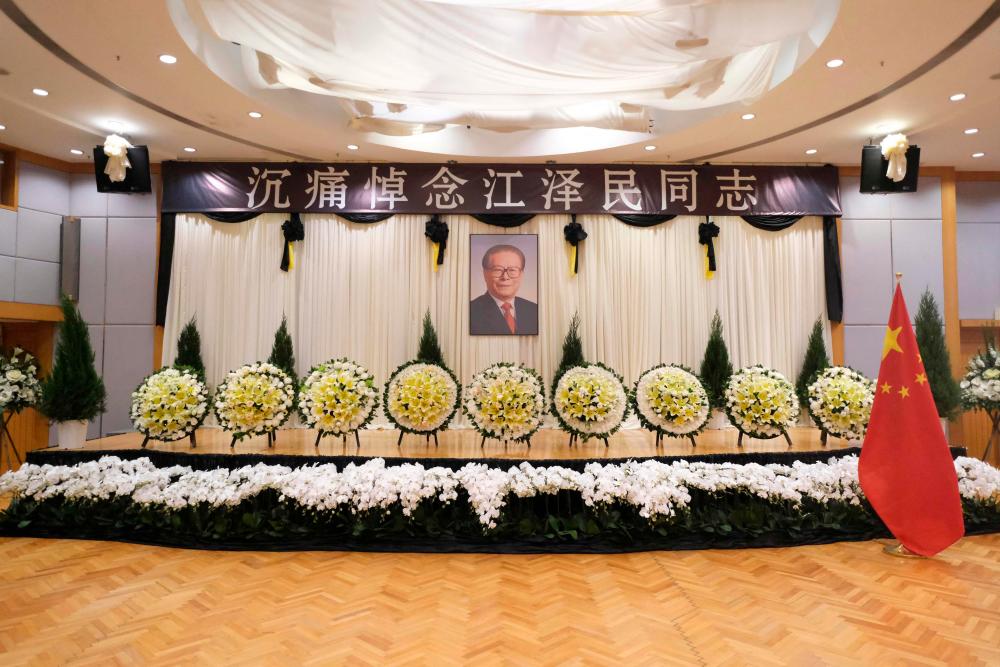 YANGZHOU: The body of former Chinese leader Jiang Zemin arrived in Beijing Thursday ahead of a public memorial service, Chinese state media said, as hundreds of people gathered in his hometown to pay their respects.

A special flight carrying Jiang’s remains from Shanghai, where he died on Wednesday of leukaemia and multiple organ failure, was met at the airport by President Xi Jinping, footage from state broadcaster CCTV showed.

In matching black armbands with a white flower pinned to their jackets, Xi and other top leaders bowed in coordination as Jiang was brought down the plane steps, his trademark heavy-rimmed glasses clearly visible through a glass coffin.

After being loaded into a ribbon-bedecked bus by goose-stepping soldiers, the body was taken to a hall in Beijing where it was draped with a Communist flag and surrounded by a vast flower arrangement, CCTV footage showed.

The broadcaster announced that a public memorial service would be held on Tuesday morning in Beijing’s Great Hall of the People, and broadcast live.

“All regions and departments must organise the majority of party members, cadres, and the masses to listen and watch,“ it said, adding a nationwide three-minute silence would be held, together with three minutes of sirens wailing.

Hundreds of people gathered on Thursday evening in Jiang’s hometown, the eastern city of Yangzhou, to pay their respects, leaving a thick pile of bouquets around the perimeter of his former residence.

A roadside flower seller said she had “lost count” of the number of chrysanthemums -- Chinese funeral flowers -- she had sold on Thursday.

AFP reporters witnessed people queuing to lay them against the grey stone wall of the traditional house, with some bowing and saying brief prayers.

Security personnel at the site politely but firmly moved groups of mourners quickly down the narrow alley past the historic building in an apparent attempt to avoid people gathering.

China has been rocked this week by anti-Covid lockdown protests that are the most widespread public demonstrations since rallies calling for political reform in 1989.

Jiang’s role in crushing those protests and repressing other political activism, as well as the flourishing corruption and inequality during his tenure, means he leaves a mixed legacy.

But many welcomed his humorous public persona as a breath of fresh air after decades of staid communist leadership.

“He was a great, patriotic and positive leader,“ Li Yaling, a woman in her late 60s, told AFP in Yangzhou. “We admired him greatly, and feel loss and nostalgia now he’s gone.”

“He was a very good leader,“ a middle-aged man named Yan said. “He made a great contribution to improving the lives of people in Yangzhou, particularly through building new infrastructure. As national leader, he kept up reform and opening and helped grow the economy.”

In retirement, Jiang became the subject of light-hearted memes among millennial and Gen Z Chinese fans, who called themselves “toad worshippers” in thrall to his frog-like countenance and quirky mannerisms.

More than half a million commenters flooded state broadcaster CCTV’s post on the Twitter-like platform Weibo within an hour of his death being announced, many referring to him as “Grandpa Jiang”.

The websites of state media and government-owned businesses turned black-and-white, as did apps such as Alipay, Taobao and even McDonald’s China.

In semi-autonomous Hong Kong, mourners who turned up early on Thursday at Beijing’s Liaison Office hoping to pay tribute were turned away because the office wasn’t ready.

A Hong Kong woman surnamed Chan, 50, told AFP she decided to go because she found Jiang “very easygoing and humorous”.

A mainland Chinese student queuing behind Chan was surprised.

“I didn’t expect any local Hong Kongers to commemorate him,“ he said, without giving his name.

Edward, 26, a mainland Chinese student in Hong Kong, said Jiang was “the most open and educated leader”.

“He made the market economy part of the mainstream in China ... without that there would be no hope for democracy,“ he said.

Hundreds of people also queued to lay chrysanthemums outside the Liaison Office later on Thursday, one of the city’s coldest days this year.

An AFP reporter saw more than a dozen people distributing flowers, some of which arrived in a van, to crowds waiting a few blocks from the office.

Some of them held name lists and directed groups of people to join the queue.-AFP