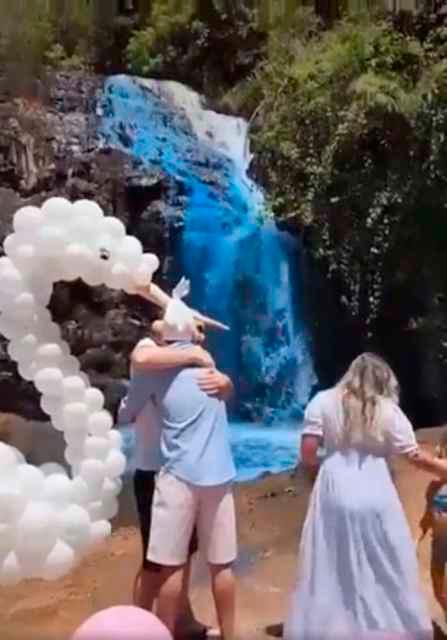 A GENDER reveal party in Brazil is being investigated by authorities for possible environmental damage of a river after a video of it went viral on social media.

Malaysia Trend reported that the party was held in Mato Grosso, central Brazil at the Queima Pe river that is said to be a vital water source for the nearby residents.

In the viral video, the guests are shown standing behind the the usual pink and blue balloon decor, cheering on the parents as the river turned blue indicating they are carrying a boy.

The Environment of Mato Grosso (SEMA) was notified of the incident and stated that an investigation will be conducted to check for any signs of environmental damage and inspecting the substances used to dye the waterfall.

According to The Washington Post preliminary investigations by SEMA found that no change in the water’s physical parameters, such as colour and other, and no trace of local fish mortality so far.

However, the authorities are still not ruling out the possibility of widespread pollution since investigations have not been called off.

As of now, one of the family members from the gender reveal party is being charged by authorities.

Meanwhile, netizens vehemently disapproved of the party’s reveal of polluting the river water for their own satisfaction.

“Seriously, they thought it was a good idea to put dye in a waterfall?! So many ways to make a revelation and they managed to choose just one with an environmental impact,” commented an angry netizen.

“So many ways to do a gender-reveal party and they chose just the one that has an environmental impact,” another netizen commented.