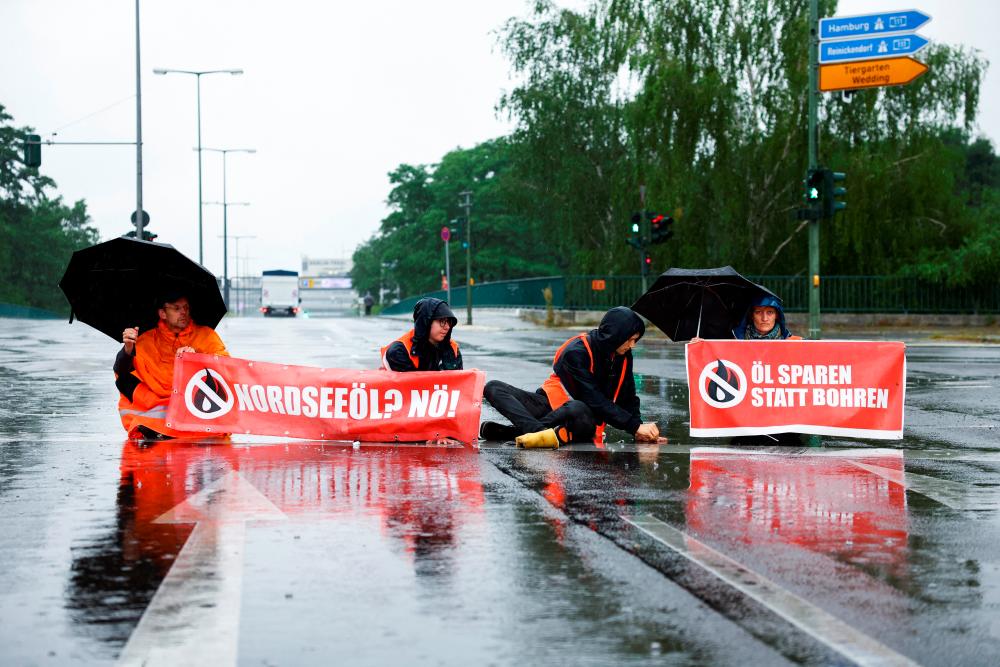 “Letzte Generation” (Last Generation) activists hold banners reading “Save oil instead of drilling” and “North Sea oil? No” during a protest against energy waste and in support of an agricultural change to reduce greenhouse gas emissions, in Berlin, Germany/REUTERSPix

BERLIN: With climate change pushed down the news agenda as Germany tackles an energy crisis and the war in Ukraine, environmental activists are resorting to increasingly eye-catching stunts to get their message across.

This week, around a dozen activists sprayed a black liquid that looked like oil on the chancellery in Berlin and stood in front of the building with a banner that read: “Save oil instead of drilling.”

Dressed in orange high-visibility jackets and hard hats, the protesters were members of Letzte Generation (”Last Generation”) -- a radical protest group that has become the new face of environmental activism in Germany.

“The government has ignored everything else: petitions have been written, a million people have taken to the streets,“ said Lina Joansen, a 24-year-old student taking part in the protest.

The activists want a promise from the government that it will not drill for oil in the North Sea.

“We know that fossil fuels can only aggravate the climate catastrophe that is already happening,“ said law student Myriam Herrmann, 25.

Six months ago, a new coalition government was elected in Germany on a promise to make climate change one of its top priorities.

The Greens entered power for the first time in more than two decades, forming a coalition with the Social Democrats (SPD) under Chancellor Olaf Scholz and the liberal FDP.

But since then, climate concerns have been overshadowed by the war in Ukraine, an acute energy crisis and record inflation.

Germany has accelerated plans to import liquefied natural gas (LNG) by sea, wants to explore new oil and gas reserves in the North Sea, and has even decided to reactivate mothballed coal-fired power plants.

The government has said it is still on target to meet its 2030 climate targets, but the protesters are not convinced.

Herrmann is “incredibly disappointed”, especially with Habeck. “We don’t have time for stopgap solutions any more,“ she said.

Earlier this year, small groups of Letzte Generation protesters blocked busy roads in Berlin by sitting down and glueing their hands to the tarmac. More than 100 were arrested.

A few days after the oil protest, the group once again employed these tactics, with about 65 protesters blocking the Frankfurter Tor intersection in Berlin's Friedrichshain.

Civil disobedience is “an established mode of protest in the German environmental movement”, sociologist Michael Neuber told AFP, recalling the anti-nuclear movement of the 1970s and blockades by the Extinction Rebellion in 2019.

Such protests have been overshadowed over the past two to three years by the massive student-led demonstrations of the Fridays for Future movement, but have more recently started to make a comeback.

“I see civil disobedience as a legitimate means of political protest, when it is peaceful,“ 27-year-old Green party politician Deborah Duering told RBB radio this week, claiming to share the “anxiety” of the activists.

In February, by contrast, many voices within the Green party had criticised Letzte Generation for blocking the roads in Berlin.

For Herrmann, if politicians want the protests to stop, there is an easy solution.

“It is enough for Scholz and Habeck to declare that they no longer want to encourage oil drilling in the North Sea,“ she said.-AFP Batik designed by Permaisuri Agong on display at Synthesis Exhibition Batik designed by Permaisuri Agong on display at Synthesis Exhibition

4.Batik designed by Permaisuri Agong on display at Synthesis Exhibition