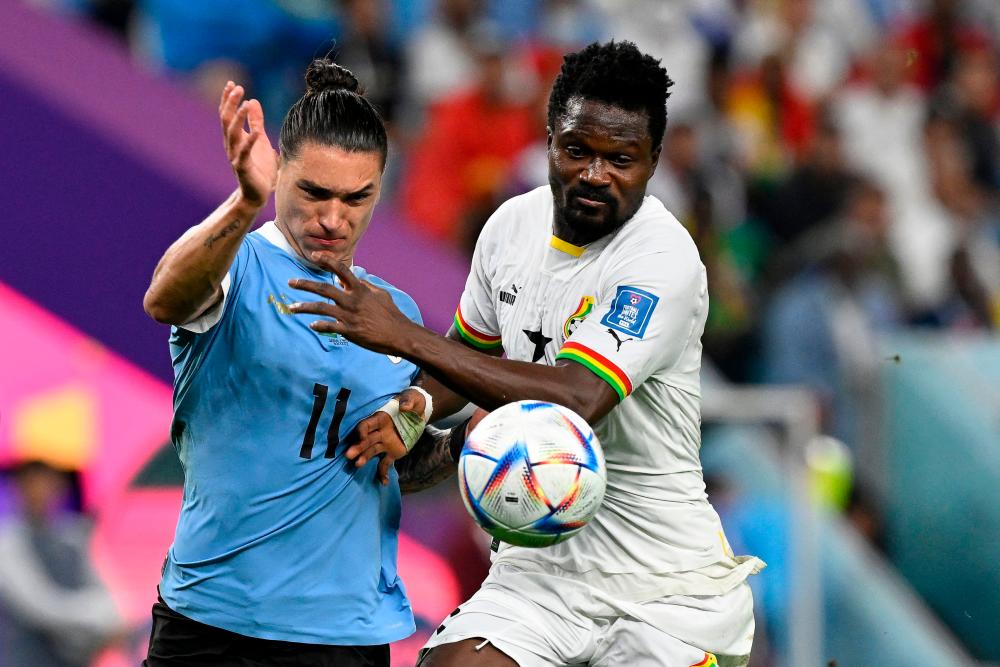 Uruguay’s forward #11 Darwin Nunez (L) fights for the ball with Ghana’s defender #18 Daniel Amartey (R) during the Qatar 2022 World Cup Group H football match between Ghana and Uruguay at the Al-Janoub Stadium in Al-Wakrah, south of Doha on December 2, 2022/AFPPix

DOHA: Ghana centre-back Daniel Amartey admitted that his team were determined that if they could not qualify for the World Cup knockout stage on Thursday, they would at least prevent Uruguay from doing so.

The bad blood between the two nations dates back 12 years to the infamous Luis Suarez handball that prevented a certain goal for Ghana but helped Uruguay go through to the World Cup semi-finals in South Africa.

Suarez was sent off but Asamoah Gyan missed the subsequent penalty and Uruguay triumphed in the shoot-out.

Ghana were thus prevented from becoming the first African side to reach a World Cup semi-final.

And in a drama-filled Group H clash in Qatar on Friday, Uruguay triumphed 2-0 but both sides were eliminated due to South Korea's 2-1 win over Portugal.

Late in the game, with Ghana chasing two goals to go through, Uruguay also realised they needed another one, creating a frantic end-to-end final 20 minutes.

Asked if it was important to deny Uruguay a place in the last 16, Amartey said: “For me, yes.”

“It was tough because you can see their centre back, everybody comes (forward).

“Uruguay needed one goal to go through and you can see we defend four against five or three against two but we managed to defend.”

Amartey denied the Ghanaians had revenge on their minds for what happened in 2010, pointing out that no-one in the current squad, except captain Andre Ayew, was even at the South Africa World Cup.

And he admitted the team did have some regrets after Ayew missed a penalty minutes before Uruguay opened the scoring in the first half.

“It’s football, it happens. If we score that penalty I think we kill them but we miss the penalty and you can see the game changed,“ he said.-AFP 1.Thailand Masters: Tze Yong, June Wei sail into next round