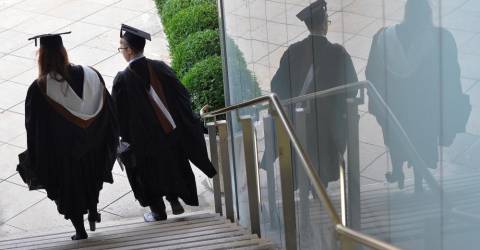 PETALING JAYA: Having a master’s degree in statistics doesn’t guarantee a cushy job with good pay, at least not during the current trying times.

Siti Syahira Abdul Halim, 28, can attest to that.

She is earning only RM2,000 a month and struggling to make ends meet.

She falls into the same category as some 400,000 households (recorded in 2019) whose take-home pay is below the national poverty line of RM2,208.

That would put her under the “urban poor” category, according to the revised Malaysian poverty line that was announced by the Statistics Department last Friday.

According to the Bank Negara Malaysia 2018 Economic Development report, a fresh diploma graduate could earn RM1,376 while a masters degree holder should take home RM2,707.

Since Siti Syahira’s salary falls short of her expenses every month, she decided to venture into freelancing.

She buys and sells products on the internet and has a number of online businesses as a reseller and agent.

Before the Covid-19 pandemic, Siti Syahira taught Zumba as a full-time instructor. But unprecedented bad times due to the outbreak forced her, along with many others, to sell food, clothes, make-up and other products online to supplement their income.

Another victim of the Covid-19 economic fallout is Mohd Fariz Muhammad, 29.

As a full-time engineer, he is supposed to be earning an average salary of RM3,700 (according to Jobstreet.com). But his monthly take-home pay is below RM2,000.

Times got harder for him when the pandemic hit, and the firm he worked for decided to cut allowances for all employees, which left Mohd Fariz with just RM1,800.

His pay is even less than the “lowest” salary for an engineer, according to information on employment websites.

In desperation, Mohd Fariz turned to the gig economy to earn some side income, while keeping his job as an engineer.

“I have a family to feed. My wife and two-year-old son are dependent on me. I also have bills to pay, so I have to take up odd jobs like food delivery at night,” he said.

Siti Syahira and Mohd Fariz are just two of hundreds and perhaps thousands of people who have fallen into the urban poor chasm, who are constantly facing biting financial difficulties.

Many are caught in tight situations, and have to resort to additional ways to earn money to meet daily expenses.

A city dweller, aged 26, who preferred to remain anonymous, said she is paid RM2,400 as a contract staff at a local bank.

She spoke about the time and money she spent to attain a degree in Mass Communication.

“It seems pointless as I work in a non-related field. I tried hard to secure a job in the communications line but couldn’t find any opening,” she told theSun.

Nonetheless, she consoled herself with the thought that it is better to have a monthly income than nothing at all.

With her earnings, she said she has learnt to be prudent and is able to survive living in the city, adding that financial management and budgeting have worked well for her.

She said she would has a monthly budget sheet, and monitors her spending while setting aside some money for emergencies.

“These help me go through each month. I am single, which makes it easier to survive with fewer commitments.”

Based on the revised national poverty line, the highest poverty levels in 2019 were recorded in Sabah at 19.5%, with the top three lowest poverty rates in Selangor, Putrajaya and Kuala Lumpur at 1.2% , 0.4% and 0.2% respectively.

Read the story on our iPaper: Graduates struggling to make ends meet with monthly income below national poverty line

4.All private kindergartens registered with MOE can resume operations: MOE