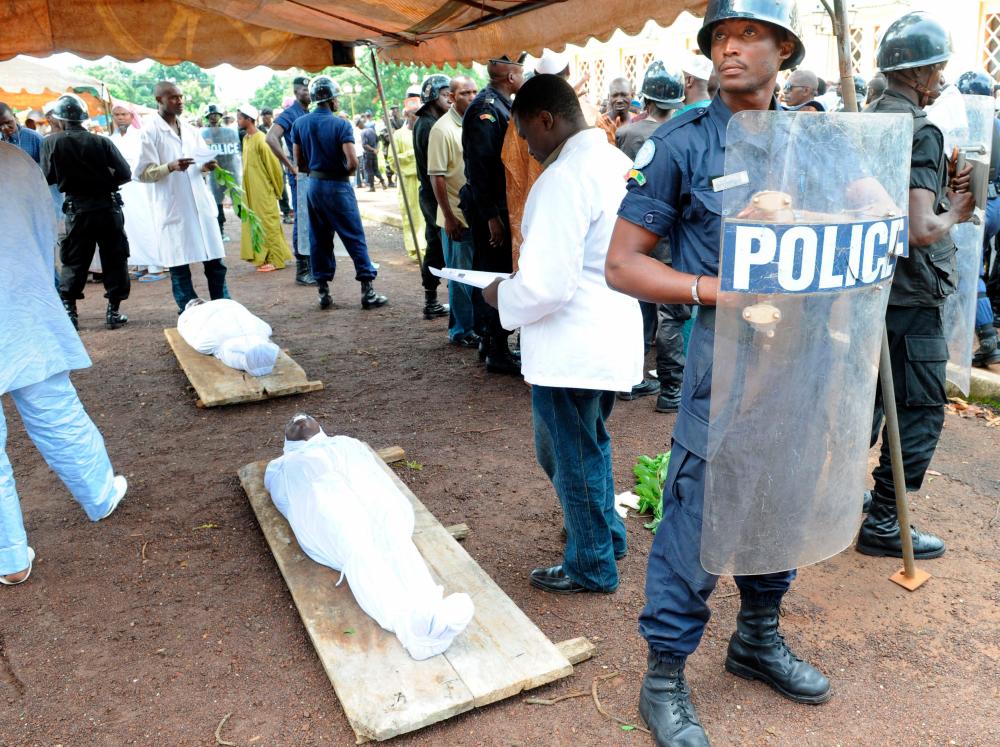 In this file photo taken on October 02, 2009 a policeman stands next to the bodies of people shot dead by Guinea junta forces on September 28, 2009 in front of the Conakry great mosque/AFPPix

CONAKRY: Countless Guineans have waited 13 years for the trial of former junta leader Moussa Dadis Camara and others held responsible for an appalling massacre committed on September 28, 2009. That time has come.

Victims and relatives will head on Wednesday to a brand-new court in Conakry, where the trial of Captain Camara and 10 former officials will open, barring a last-minute adjournment.

The court is just a few kilometres (miles) from the September 28 stadium, where soldiers, police and militiamen cut down opposition supporters and sympathisers.

On that day and the next, 156 people were slaughtered and thousands injured, while at least 109 women were raped, says a report of a UN-mandated international commission, published three months after the event. The actual numbers are probably higher.

Delays by those in power and the impunity for security forces that had become an “institution”, according to the commission, long cast doubt on the chances of a trial. The west African country has mostly been ruled for decades by authoritarian regimes.

Then the head of the current military junta, Colonel Mamady Doumbouya, who came to power in a putsch in 2021 after 11 years of civilian rule, asked in July for the trial to be held before the next anniversary date.

“This year will not only be a commemoration, but a trial,“ said Saran Cisse, who describes herself as a “survivor of September 28”.

She cannot hold back tears or find words for the “shame” of the treatment she endured, then the social stigma. “From this trial, I expect the truth, nothing but the truth, because 13 years is not 13 days.”

Tens of thousands of people were gathered at the stadium to demonstrate the strength of the opposition and to dissuade Camara from running for president in January 2010.

He had come to power nine months earlier via a coup in a nation steeped in poverty despite considerable natural resources.

Numerous testimonies report how the the presidential guard’s Red Berets, police officers and militiamen entered the stadium around noon, cordoned off the exits and opened fire indiscriminately on a crowd that had previously been festive.

The killers attacked unarmed civilians with knives, machetes and bayonets, leaving the stands, corridors and grass strewn with the dead and dying. They sexually assaulted and then killed many women. Others were trampled to death in the panic.

“It was like a jungle,“ recalled AFP and Radio France Internationale correspondent Mouctar Bah.

“People were running everywhere, children and youths were climbing the walls while soldiers shot at them. The luckiest ones managed to escape, even wounded, but others... were finished off.”

One victim, Fatouma Drame, told AFP how soldiers held her by the stadium for two hours after the killing started. They put her in solitary confinement for two weeks where she was repeatedly raped by four men.

Drame still endures the trauma of the door opening. “It was infernal,“ she said.

International investigators found the abuses could qualify as crimes against humanity, noting the brutality went on for several days against sequestered women and male detainees who were tortured.

The trial should establish the responsibilities of Captain Camara and his co-defendants, including several military and government figures of the time. Some have been detained for years.

“Dadis Camara played a central role in the September 28 massacre,“ either by issuing the order or consenting to it, declared Human Rights Watch in 2009 after carrying out its investigation.

Toumba, who accused Camara of ordering the massacre, is also due in court.

Camara returned to Guinea overnight on Saturday. “He will be there to deliver his part of the truth,“ lawyer Almamy Somory Traore told AFP. “He proclaimed his innocence and we are going to prove it.”

Civic associations hope the trial opening will not just be a show, before being adjourned.

The junta wants to make a stand against impunity even as it has recently cracked down on civil liberties, say rights activists.

“We hope to have clear, transparent justice, no parody of justice, and in the presence of all the defendants,“ said Asmaou Diallo, president of the Association of Victims, Parents and Friends of September 28.-AFP