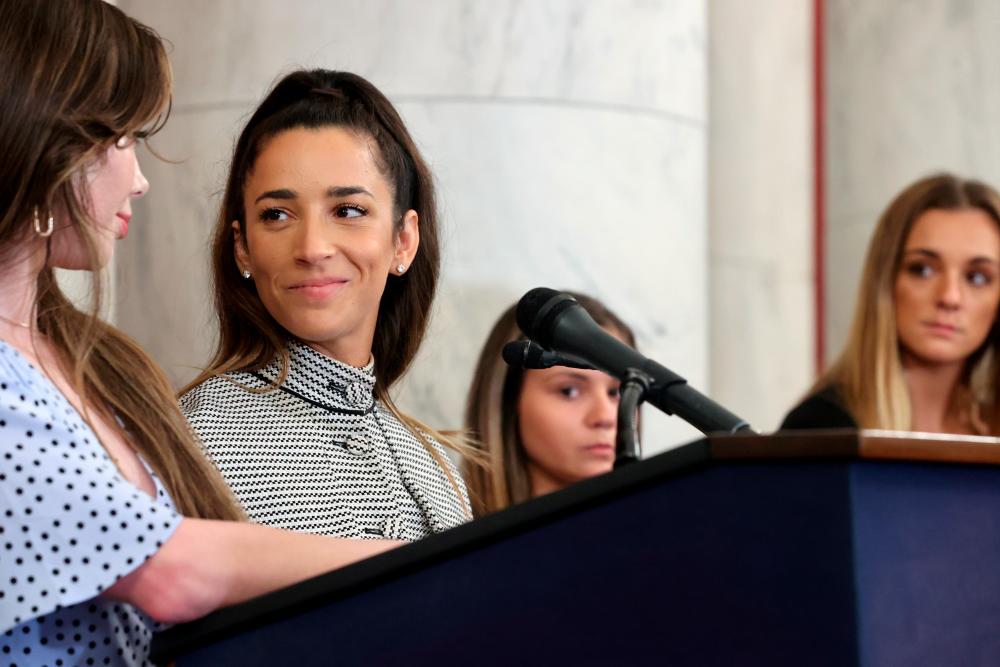 After their day of testimony before the Senate Judiciary Committee gymnasts Maroney, Raisman, Lorincz and Nichols participate in a news conference on Capitol Hill in Washington/REUTERSPix

In the three-hour, two-part special Raisman recounts her journey to recovery and speaks with various survivors and experts on sexual abuse, including #MeToo founder Tarana Burke.

While she said she found the process of producing the special healing and rewarding, Raisman recalled being physically drained.

“I would be like laying on the couch or just in between interviewing survivors, and I just felt so sick and so tired,“ she told Reuters. “I’m trying to navigate how I can prevent from feeling like that, but also recognizing if I do feel like that, it’s OK to feel like that.”

Raisman, who won six medals in the 2012 and 2016 Olympics, recognizes the pitfalls of her current passion.

“It has truly affected my personal life of speaking up about this,“ she said.

Nassar was eventually tried and sentenced https://www.reuters.com/article/gymnastics-usa-nassar-idINKBN1FD1EU in January 2018 to up to 175 years in prison for abusing young female gymnasts who were entrusted to his care.

Raisman, 27, expressed frustration that more has not been done to investigate USA Gymnastics or the U.S. Olympic and Paralympic Committee (USOPC) for covering up Nassar's abuse for years. She wants a thorough independent probe to hold the sports bodies and FBI accountable.

“It’s scary to think about how many people knew that he was an abuser and didn’t do anything. And that’s what’s really important for people to understand, is that it really took a village to protect a pedophile,“ she said.

“Without the answers, we can’t believe in a safer future and we don’t know if there are still people working there or working with other children that covered up our abuse,“ Raisman added.

The USOPC issued a statement saying it has implemented reforms after hiring a law firm to conduct an independent investigation.

Six years after first speaking out, Raisman said she is learning to love gymnastics again.

“I basically lived in the gym,“ she said. “There were some days I would train up to six to seven hours. I was so exhausted and just put everything I had” (into it).

“And so, I also think that some of the people in the sport who really let us down, it was really hard for me to ... separate that from my love from gymnastics.”

“Aly Raisman: Darkness to Light” will air on the U.S. cable network Lifetime on Sept. 24. Lifetime is a unit of A+E Networks, a 50–50 joint venture between Hearst Communications and The Walt Disney Co. -Reuters