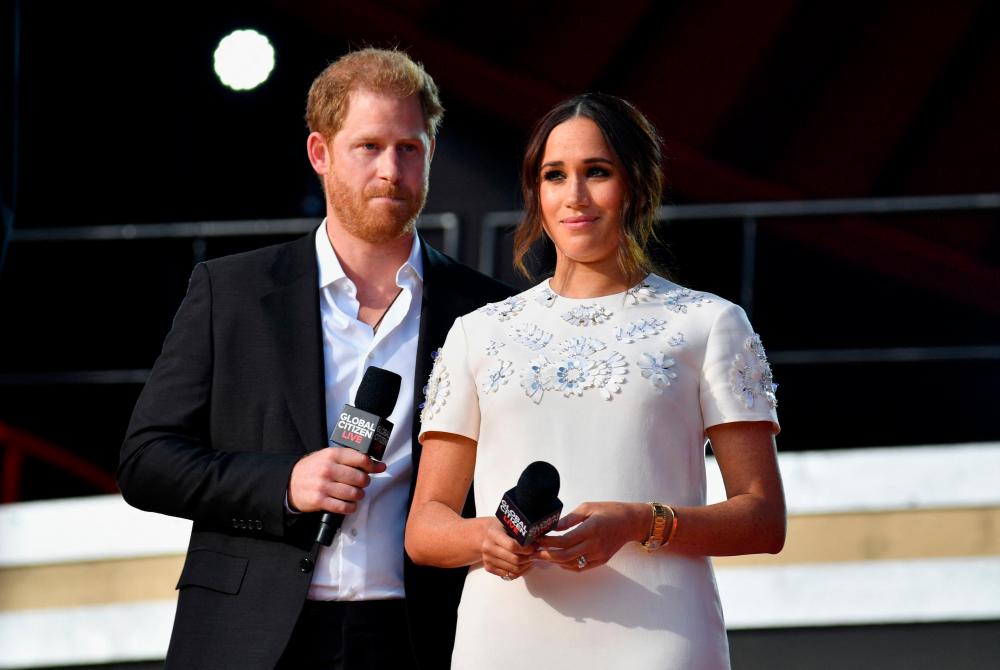 NEW YORK: A “once-in-a-generation” music event circled the world on Saturday, with a slew of megastars taking the stage in New York for Global Citizen Live -- 24 hours of shows across the planet to raise awareness on climate change, vaccine equality and famine.

Britain’s Prince Harry and his wife, Meghan Markle, advocated for Covid-19 vaccine access to be treated “as a basic human right,“ as the event was broadcast live from New York’s Central Park.

“The way you’re born should not dictate your ability to survive,“ the Duke of Sussex said to cheers from the thousands-strong crowd.

NGO Global Citizen wants one billion trees planted, two billion vaccines delivered to the poorest countries and meals for 41 million people on the brink of starvation.

The Duke and Duchess of Sussex followed performances by singer Alessia Cara and pop veteran Cyndi Lauper with a rendition of her “Girls Just Want to Have Fun” dedicated to Afghan women.

Funding announcements poured in between the sets.

USAID Administrator Samantha Power announced in a recorded message the United States would “contribute more than $295 million to countries around the world to stave off famine and extreme hunger, confront gender-based violence and address the urgent humanitarian needs the Covid-19 pandemic is leaving in its wake.”

Also billed to perform in Central Park were Billie Eilish and Jennifer Lopez, among others.

The broadcast on social media opened with a pre-recorded performance by pop superstars BTS in Seoul before the show kicked off in Paris with Elton John.

The “Rocketman” performed hits including “Tiny Dancer” and “Your Song” in front of the Eiffel Tower in a dazzling green suit.

“No one should be left behind,“ said the 74-year-old pop legend, who appeared despite a hip injury that forced him to cancel the rest of his tour dates this year.

Ed Sheeran was the headliner in Paris alongside Black Eyed Peas and Stormzy, while Stevie Wonder will top the bill in Los Angeles.

“There has never been a greater need for advocacy than right now,“ said Bollywood star Priyanka Chopra, hosting the live broadcast from Paris.

Tens of thousands won tickets for the concerts (which required vaccination proof or negative tests) by signing up for the Global Citizen app and sharing its messages on social media.

This week's comeback gig by The Fugees in New York -- their first in 15 years -- was also billed as part of the event.

Global Citizen has been behind other high-profile charity events, including “Vax Live: The Concert To Reunite The World” earlier this year in Los Angeles.

That brought together musicians, actors, celebrities, world leaders and even the pope, in a united call for global vaccinations to fight Covid-19.

The organization describes itself as a movement with a mission to end extreme poverty by 2030.

Its app uses incentives such as concert tickets to encourage users into pressuring governments on issues around sustainability and equality.

The head of the World Health Organization, Tedros Ghebreyesus, lent his support to the campaign, urging vaccine equality.

“We now face a two-track pandemic of haves and have-nots,“ he said ahead of the event.

“We cannot disregard this gross inequity or become complacent.”-AFP

US tells Supreme Court Guantanamo detainee can give limited testimony

Those on Aussie farm work visa enjoy same benefits as citizens, says Malaysian employed Down Under

2.US tells Supreme Court Guantanamo detainee can give limited testimony

3.Those on Aussie farm work visa enjoy same benefits as citizens, says Malaysian employed Down Under