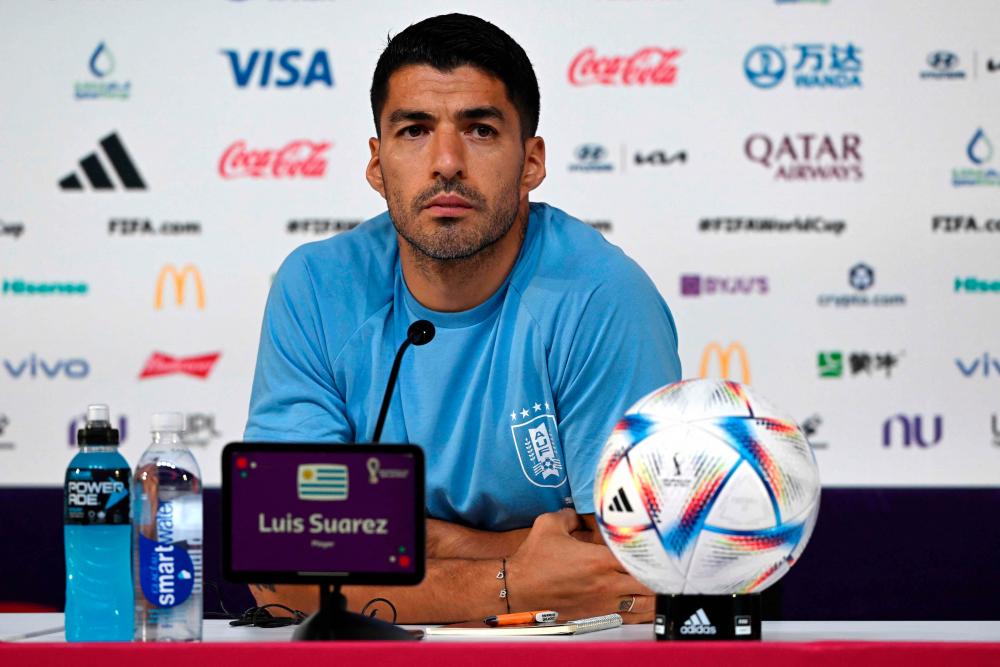 Uruguay’s forward #09 Luis Suarez gives a press conference at the Qatar National Convention Center (QNCC) in Doha on December 1, 2022, on the eve of the Qatar 2022 World Cup football match between Ghana and Uruguay/AFPPix

ACCRA: When Ghana face Uruguay on Friday in their decisive final World Cup group match, one name will be on the minds of many from the West African country: Luis Suarez (pix).

The Uruguay striker broke Ghanaian hearts at the 2010 World Cup when his deliberate handball stopped a certain goal in the dying stages of their quarter-final.

Suarez was sent off but Asamoah Gyan missed the resulting penalty -- cue wild celebrations from Suarez on the sidelines -- and Uruguay then beat the Black Stars in the penalty shootout.

It is a dark day scorched deep in the memory of many Ghanaian football fans.

“We were waiting to celebrate, but we cried in the streets,“ said Samuel Quist, 36, buying a Ghana team shirt in the capital Accra in preparation for Friday’s game.

This time it is Uruguay who are up against it -- a Ghana win would put them into the last 16 and send Uruguay home, but a draw for Ghana could also be enough.

Current Ghana skipper Andre Ayew, the only player left from the 2010 squad, attempted to play down talk of revenge.

“Everyone felt bad (in 2010) but for me I just want to get to the next stage,“ he told reporters in Qatar.

“Revenge or not, we would go with the same determination and desire to win because we want to get to the next stage.”

“I am not looking back, I don’t want to focus on the past,“ added the softly spoken 32-year-old forward.

But try telling that to people in Ghana who are not willing to forgive or forget Uruguay and especially Suarez, the feisty 35-year-old striker who has been banned from football in the past for biting opponents.

“Luis Suarez, Luis Suarez, we all remember, so it is revenge on Friday,“ said Philip Sheshe, 32, outside a market store selling Ghana jerseys.

“On that day the ball was meant to enter the net but he used his hand.”

That sentiment was echoed by ruling-party lawmaker Collins Adomako-Mensah.

“They gave us a very powerful defeat. We have never forgiven Suarez,“ he told AFP.

“He should expect fireworks from our boys.