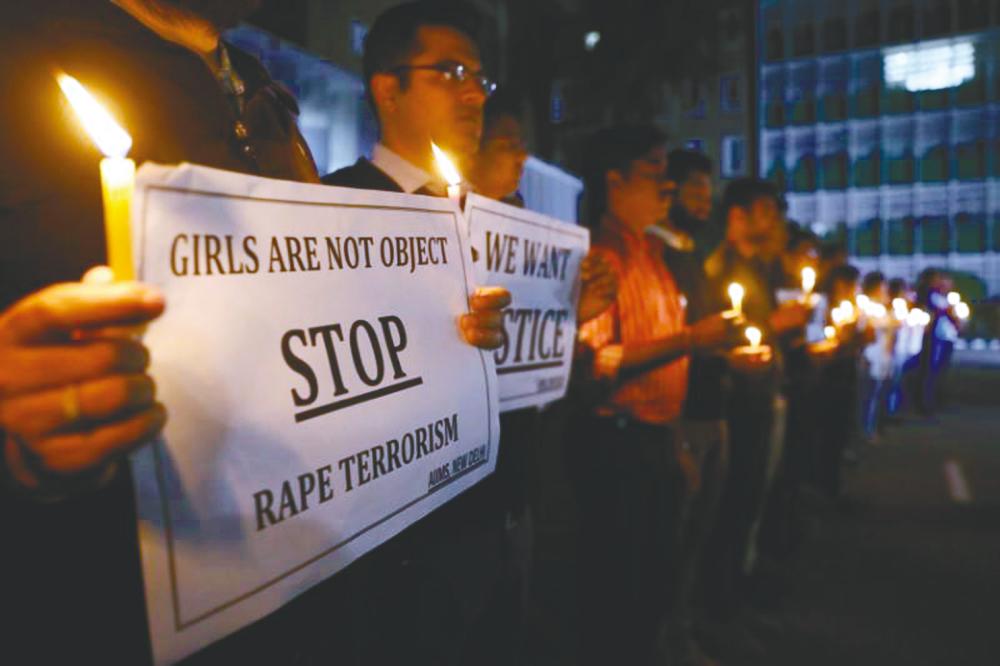 Cases of rape happen on almost every continent/Reuterspix

WIMBLEDON doubles champion Peng Shuai’s disclosure last month that she had been a victim of sexual assault at the hands of a powerful politician in China throws into focus once again the high risk that women face anywhere on this planet where there are lusty men.

The same month in our own country, police were asked by a cabinet minister to investigate the topic of sexual harassment in the entertainment industry.

Also in November, All Women’s Action Society told theSun of its concern over the “large numbers of sexual assault against children, sexual exploitation, high incidence of teenage pregnancy and baby dumping”.

In the same report, OrphanCare Foundation revealed that 424 babies were abandoned from 2018 to September this year, averaging at nine babies a month. Of this total, 283 or 60% did not survive.

Of course, it is easy as always to blame women for being sexy or seductively dressed, and for choosing to abort the foetus or abandon their babies. Do we also blame minors for being raped?

Last September, police disclosed that one northern state alone had recorded 51 rapes of minors as young as 13 years from January to July this year.

Among the total were 14 incest cases, with the perpetrators obviously known to their victims.

A total of 334 incest cases were registered and charged in Malaysian courts between January and June this year, of which 35% involved biological fathers and 45% were stepfathers, with the rest involving uncles, siblings, grandfathers, brothers-in-law and cousins.

Females get raped because men are lusty. Every year, there are cases of celibate nuns being raped by celibate priests despite the religious clothing that both wear.

The cases happen in every continent. Some nuns are subjected to multiple rapes, and many have gone for abortion that is religiously forbidden.

Why do priests rape nuns? Because they are men placed in control over very trusting women and there is opportunity in the quietude of a religious abode.

Besides nuns, any woman who devoutly surrenders to an absolute religious authority may find herself sexually victimised, as recent cases in several religiously fervent nations across Asia and South America have shown.

Religious belief can be turned into a weapon for sexual exploitation through intimidation.

As a woman, you must never forget what goes on within a man’s brain. In 2014, research at Germany’s Central Institute for Mental Health discovered that men often dream of sex and aggression.

These are not the stuff of women’s dreams. Why do men crave sex and behave aggressively?

It is because they have 10 to 100 times more testosterone than women, goading them into combat, pushing them to gain power and satisfy their lust.

Wherever a lusty man gains unquestioned power over a woman and has opportunity to satiate his desire, that woman is a goner.

A 2010-2013 study by the United Nations across Asia Pacific found that one in four men had raped a woman or girl, usually their wives whom they treat as their possessions to be used or abused.

So, the family institution can be a place of rape. In fact, any institution where power is vested entirely or predominantly in men will be a place for sexual molestation.

Four years ago, a female houseman at a hospital in Petaling Jaya lodged a police report that a senior doctor had sexually molested her many times under threat that she would be failed in her test if she did not comply.

Educational institutions all over the world are the most notorious hideouts for wolves.

Victims in Britain allege that there is a rape culture pervading schools, colleges and universities, with personal testimonies running into thousands.

In the US, a women’s advocacy group UltraViolet has claimed that one in four college women are sexually assaulted.

Massachusetts Institute of Technology in Boston has acknowledged that one in six female undergrads get sexually assaulted.

In 2016, Harvard University published an official inquiry which found that 47% of women in their last year of study, who attended functions organised by all-male final clubs, were sexually molested.

It is worthwhile noting that despite their high testosterone levels, men in hunter-gatherer indigenous societies rarely assault their women.

Rape would be punished with exile, which in Stone Age days meant death at the hands of wild beasts.

Anthropologists surmise that it is the equitable distribution of economic functions and leadership roles among men and women that ensure civility of these primitive societies that lasted 300,000 years.

Civilisation, just 7,000 years old, has produced several important drawbacks, one of which is the rape culture.

Civilisation is the governing of mass societies that are kept stable by religious and political control, and defended by armies.

As it involved combat, men took control of all the institutions of civilised society.

Most women had their roles confined to baby production and housekeeping, with their status as possessions owned by fathers and then by husbands.

This is the ideal situation for rape, and it doesn’t get punished unless you rape a woman who is some other man’s possession in your own society.

It is also one of the reasons that men desire warfare: in addition to gaining territory and booty, they get women to rape.

Nadia Murad, a Yazidi woman and former sex slave of a powerful terrorist group in West Asia, wrote a book called The Last Girl in which she expressed the sentiment that she would be the last victim.

Two big reforms need to be introduced: one, legislate for 30% to 60% of all leadership positions to be held by women in any social institution, and that must include religious bodies, NGOs, college and university clubs, managerial ranks, boards of governors, boards of directors, Parliament, the Cabinet, state legislative assemblies, and the army.

Rwanda is the world leader, forging ahead in this direction as it has eaten and learnt from the bitter fruit of male domination.

The second reform is that women leaders must strengthen the feminine distaste for needless combat.

If women leaders ape the men, the disaster will be greater because you now have everyone behaving aggressively. In the recent Malacca state election, a woman candidate said: “I am ready for the war; I have the energy for the battle.”

What’s wrong with Malaysian politics is that it lacks focus on building cooperative networks that bear strong features of diversity and ethnic-religious inclusivity throughout all the institutions of our nation.

This is what our women politicians must stand up for, and stand together for it.

Next, we will discuss two major commercial devices used in sexual exploitation.

Song Ji-A edited out of ‘The Manager’