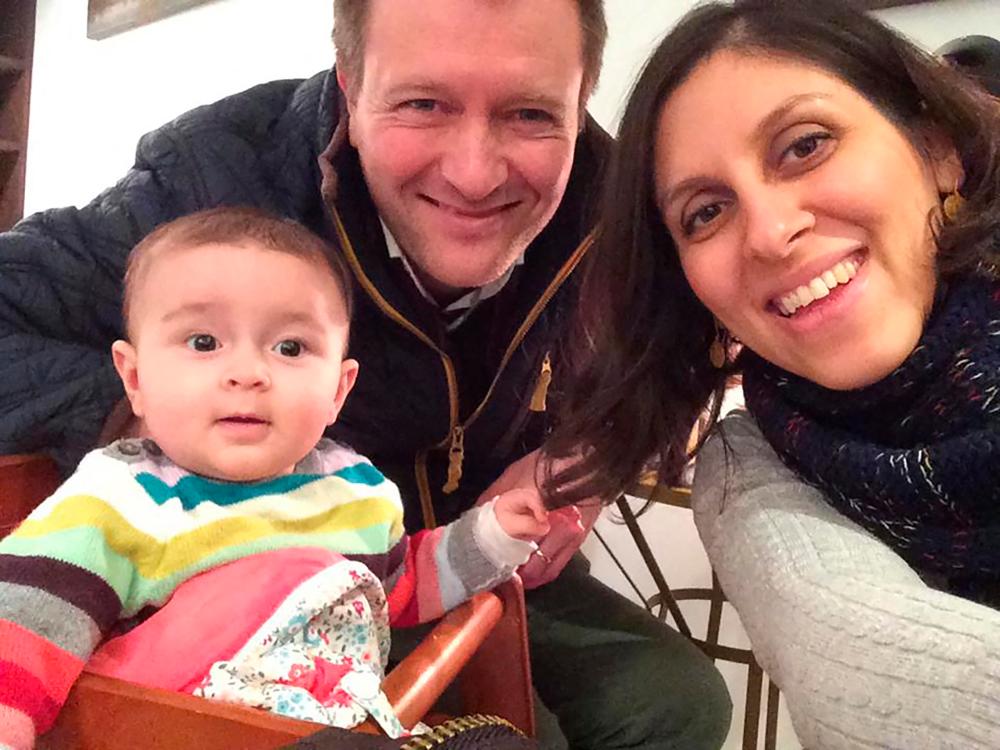 In this file photo taken on June 10, 2016 An undated handout image released by the Free Nazanin campaign in London on June 10, 2016 shows Nazanin Zaghari-Ratcliffe (R) posing for a photograph with her husband Richard and daughter Gabriella (L).AFPpix

LONDON: The husband of Nazanin Zaghari-Ratcliffe, a British Iranian held in Iran since 2016, began a hunger strike Sunday to denounce the British government for “also letting us down” and failing to secure her release.

Richard Ratcliffe plans to spend the night in a tent outside the Foreign Office, a week after his wife lost her appeal on a second jail term in Iran.

In an online petition with more than 3.5 million signatures, Ratcliffe said he began his hunger strike, his second since 2018, to force Prime Minister Boris Johnson and his government to “take responsibility” for his wife’s fate.

Tehran “remains the primary abuser in Nazanin’s case”, but “the UK is also letting us down”, he said.

The reason, he said, is his family “is caught in a dispute between two states” over an old debt of 400 million pounds that London refuses to settle since the Shah of Iran was ousted in 1979.

“Two years ago I went on hunger strike in front of the Iranian Embassy, on the eve of Boris Johnson taking over as Prime Minister,“ Ratcliffe wrote.

“Two years ago we were allowed to camp in front of the Iranian Embassy for 15 days, much to their considerable anger,“ he said.

“But it got Gabriella home,“ he said, referring to the couple’s now seven-year-old daughter who had originally travelled to Iran with her mother.

“We are now giving the UK government the same treatment,“ he said.

“In truth, I never expected to have to do a hunger strike twice. It is not a normal act,“ Ratcliffe said.

“It seems extraordinary the need to adopt the same tactics to persuade government here, to cut through the accountability gap.

“It is increasingly clear that Nazanin’s case could have been solved many months ago, but for other diplomatic agendas,“ he said.

“The PM (Johnson) needs to take responsibility for that. Who does the Government answer to for the choices it makes? Who takes responsibility?”

Nazanin Zaghari-Ratcliffe, a 43-year-old project manager, who lived in London with her husband and daughter, has been held in Iran since 2016 and served a five-year sentence.

In late April, she was sentenced to another year’s imprisonment and banned from leaving the country for a further 12 months.

Her family fears she will soon return to prison, which she had been allowed to leave with an electronic bracelet in March 2020 amid Covid-19 concerns.

Zaghari-Ratcliffe is one of a number of Western passport holders being held by Iran in what rights groups condemn as a policy of hostage-taking aimed at winning concessions from foreign powers.

The project manager for the Thomson Reuters Foundation, the news agency and data firm’s philanthropic arm, was arrested in April 2016 while visiting family.

She was convicted of plotting to overthrow the regime, a charge she strenuously denied.

She completed that sentence in March this year, only to be slapped with a fresh one-year jail term for “propaganda against the system”.

The UK’s then-foreign minister Dominic Raab condemned the second sentence, saying that Iran’s treatment of Zaghari-Ratcliffe amounted to torture and she was being held unlawfully.-AFP

SRC hearing: Najib to show up at 12.30pm or risk arrest