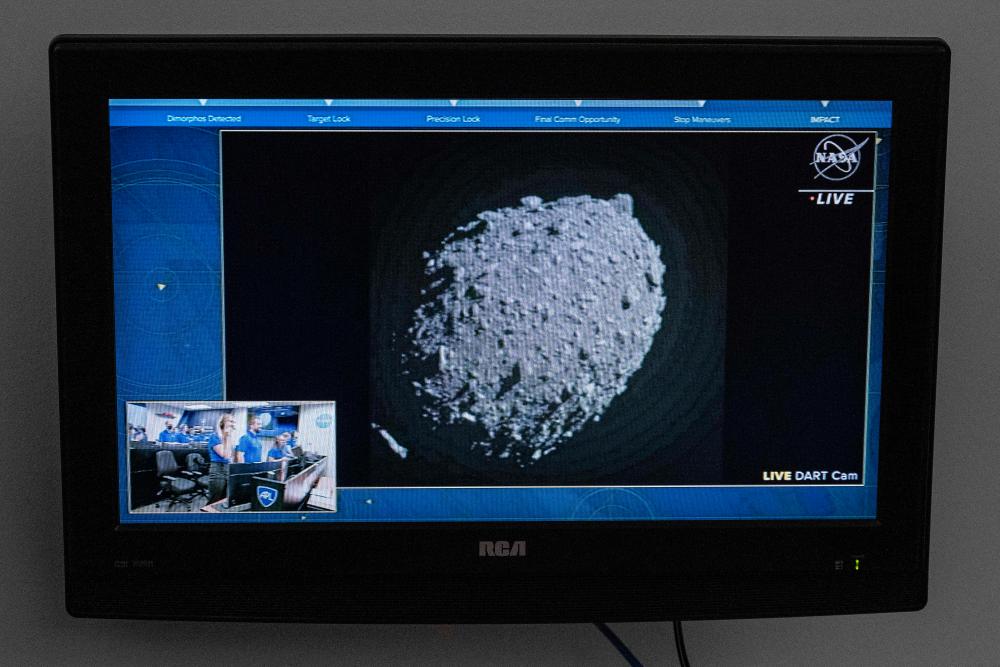 A television at NASA’s Kennedy Space Center in Cape Canaveral, Florida, captures the final images from the Double Asteroid Redirection Test (DART) just before it smashes into the asteroid Dimorphos on September 26, 2022/AFPPix

ROME: The first images of the controlled crash of the DART probe into an asteroid in a test of a method of planetary defense against near-Earth objects (NEOs) were transmitted back to Earth by Italian mini-satellite LiciaCube on Tuesday.

The images of the probe’s impact with the Dimorphos asteroid are being processed and will be visible later Tuesday, Liciacube mission chief Simone Pirrotta told Italian news agency (ANSA).

“We have downloaded four images, all very interesting”, said Pirrotta, of the Italian Space Agency (ASI).

“Our enthusiasm is sky-high”.

Managed and coordinated by ASI and built by the firm Argotec, LiciaCube is the first all-Italian mission active in deep space, 13 million miles from Earth, ANSA added.

The Double Asteroid Redirection Test (DART) is a NASA space mission aimed at testing a method of planetary defense against near-Earth objects (NEOs).

Launched from Earth in November 2021, the probe impacted the minor-planet moon Dimorphos of the double asteroid Didymos 10 months later to assess the future potential of a spacecraft impact to deflect an asteroid on a collision course with Earth through a transference of momentum.

The asteroid selected for the test poses no actual threat to Earth.

The DART spacecraft was launched on 24 November 2021, and successfully collided with Dimorphos on Sept 26.-Bernama 2.Germany crash out of World Cup despite 4-2 defeat of Costa Rica