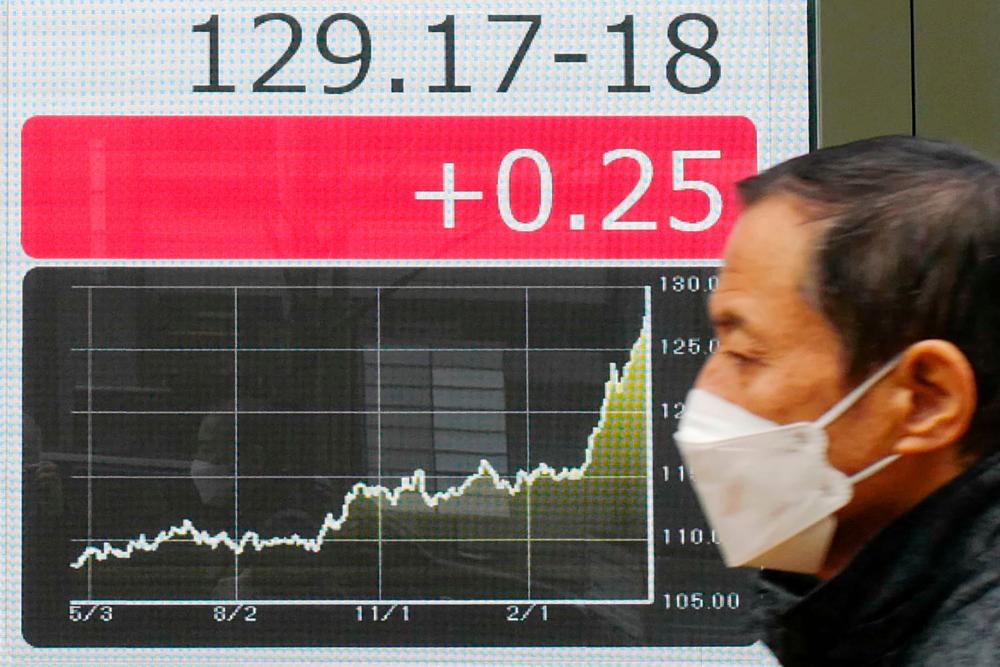 An electronic quotation board displays the yen’s rate against US dollar in Tokyo yesterday. – AFPpix

TOKYO: The yen’s recent declines are driven by fundamentals and would be no reason for Japan to change economic policy, including the central bank’s ultra-low interest rates, a senior International Monetary Fund (IMF) official said.

“What we’re seeing so far on the yen is driven by fundamentals,” Sanjaya Panth, deputy director of the IMF’s Asia and Pacific Department, told Reuters in an interview yesterday.

The yen has fallen to two-decade lows against the dollar as the Bank of Japan (BOJ) continued to defend its ultra-low rate policy in contrast with heightening chances of aggressive rate increases by the US Federal Reserve (Fed).

“We do not see disorderly market conditions right now in the foreign exchange market. It’s been driven by fundamentals,” Panth said, when asked whether yen-buying currency intervention by Japanese authorities would be justified.

“Our general approach is that as long as markets aren’t disorderly, the current policy stance is appropriate,” he said.

In New York trading yesterday, the yen bounced from a fresh two-decade low after the BOJ stepped into the market again to defend its ultra-low interest-rate policy, drawing a sharp contrast with the Fed’s aggressive tightening path. Increased nervousness around verbal intervention and growing speculation around an impending bilateral meeting between US Treasury Secretary Janet Yellen and her Japanese counterpart also prompted traders to pare back short bets on the yen.

“Many are watching 130 as a key level, but we view 135+ as a more formidable line in the sand,” wrote Mazen Issa, senior FX strategist, at TD Securities in a research note. “This upleg broke the post-Plaza Accord multi-decade trendline, which keeps dollar/yen ordinates higher and exposes upside potential to 150,” he added, referring to a previous multi-country agreement among developed economies to depreciate the dollar against their respective currencies.

The BOJ again offered to buy unlimited amounts of Japanese government bonds to check the rise in Japanese 10-year yields, which were butting against its 0.25% tolerance ceiling.

“Unless the Fed abandons hikes or the BOJ unlikely adopts them, dollar/yen will be at the beck and call of the Fed’s terminal rate, which likely remains too low and will not be established until well into the tightening cycle,” Issa said. – Reuters 4.Mat rempit shares how his ‘cop’ brother got his bike out from police station