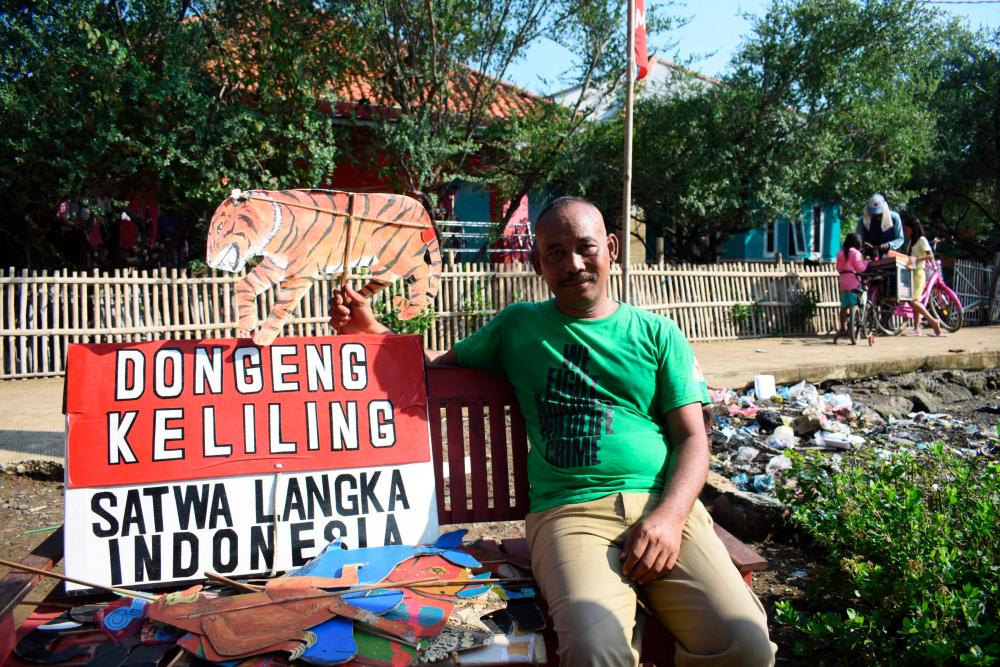 This picture taken on June 19, 2022 shows former teacher Samsudin posing with a cardboard puppet while teaching children about animal conservation at Cemara Kulon village, in Indramayu/AFPPix

INDRAMAYU: In a small Indonesian fishing village, a man with a fake rhino head perched atop his own puts on a puppet show for a group of eager children.

Former teacher Samsudin is educating the kids about the plight of the critically endangered Javan rhino -- the world’s rarest -- using cardboard figures, comical expressions and exaggerated voices to spread his message of conservation one story at a time.

The 50-year-old asks the children in the West Javan village of Indramayu to mimic the animals, and teaches them the importance of guarding the forest and the wildlife unique to it.

“I want them to know rhinos need pristine forest and that human beings are not the only creatures on earth,“ he told AFP.

“I want children to love nature and grow up into people who are aware and care about our natural resources.”

Javan rhinos -- one-horned mammals that can weigh up to two tonnes and have folds of loose skin that resemble armour plating -- once numbered in the thousands across Southeast Asia.

But they are now barely clinging to existence, having been hit hard by rampant poaching and human encroachment on their habitats.

After years of population decline, there are believed to be just 75 of the mammals left at the Ujung Kulon sanctuary -- their last remaining wild habitat -- on the westernmost tip of Java island.

Samsudin, who like many Indonesians uses only one name, decided to dedicate his time to the conservation of Javan rhinos and other endangered species in 2014 after learning about their precarious situation.

Since then, he has travelled across the archipelago on an old bicycle, performing free puppet shows at stops along the way to teach children about the animals.

“I want them to know about rhinos before it’s too late. I don’t want them to only see rhinos from textbooks or cartoon movies,“ Samsudin said.

Samsudin makes his puppets out of cardboard because it’s readily available, and because he opposes the use of leather -- which is used in traditional Javanese puppet theatre shows -- for conservation reasons.

The use of visual storytelling makes the message easier for children to digest and creates a stronger bond between him and his young audience, he said.

“Children have a short attention span; I have to be creative to distract them from their gadgets,“ he said.

Rhino conservation is especially difficult because of the animals’ long gestation period and their tendency to roam, which often leaves males and females separated during the mating period.

Samsudin is also determined to challenge cartoon depictions of rhinos as being lazy and dumb.

“Rhinos are very shy and they have an unusual appearance, but there are only a few of them left in the world, so I want to lift their image and make them special and wise creatures,“ he said.

After coronavirus temporarily brought the curtain down on his act, Samsudin is now back on the road performing for children.

His show casts the Javan rhino as the main character, with a macaque and a Sumatran tiger for sidekicks, and a hunter as the villain.

One happy audience member was Gelar Dwi Titar Syahputro, a primary school student who watched the puppet show with his friends.

“It was fun and hilarious. I learned something new. The story told me not to litter and to promise to guard nature,“ Syahputro said.

Samsudin wants his young audience members to emulate him one day, joining his mission to spread awareness about the environment through folklore.

“I hope among hundreds of children I’ve met, one or two will follow in my footsteps and join me to spread messages about conservation,“ he said.