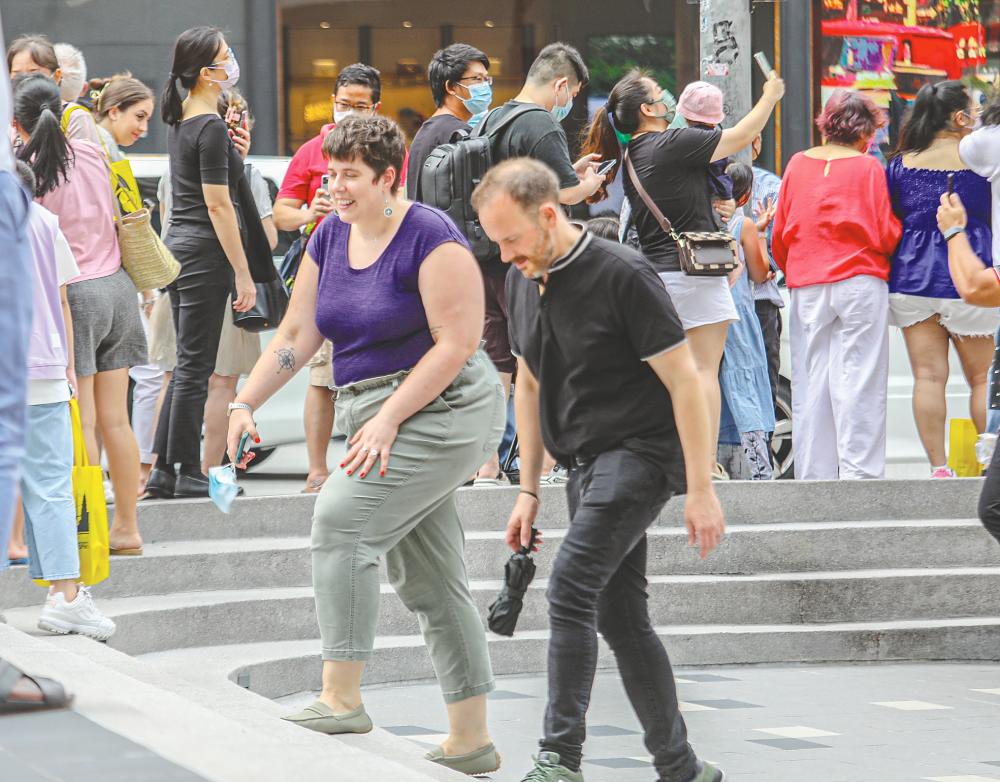 Foreign tourists are back in droves but hoteliers are worried their business would be hard hit again if the worker shortage is not resolved. – AMIRUL SYAFIQ/THESUN

PETALING JAYA: While upbeat over tourist arrivals this year, the Malaysian Association of Hotels (MAH) has warned the tourism industry would not be able to service its projected five million arrivals if the Human Resources Ministry fails to process work permit applications.

Its president Christina Toh said MAH reached out to the ministry three weeks ago, hoping it would expedite the work permits of foreign workers, but had not received a response.

The ministry had not replied to request for comment as of press time.

“When the Covid-19 pandemic started, we were one of the first sectors to be affected. Now, we want to revive our industry and the number of tourists as of last month shows that we are on the right track.

“However, we need the extra workforce to help us.”

She said her members were facing “a very serious shortage” of workers to meet the needs of tourist arrivals since the country reopened its borders on April 1.

“While Tourism, Arts and Culture Minister Datuk Seri Nancy Shukri had said on June 4 that the country had attracted over one million arrivals as of the end of May, which is half the targeted two million international tourists set by the government, industry players were expecting some five million tourists to arrive in the country by the end of the year,” she said, adding that the figure is based on the encouraging number of hotel bookings made so far.

Toh said the industry-wide worker shortage includes kitchen staff such as chefs and support personnel, front office staff, chambermaids, stewards, waiters, and others who had taken other jobs during the Covid-19 pandemic when many hotels were forced to close due to a lack of business.

She said the industry has attempted to hire Malaysians for such jobs, but the response has not been encouraging.

“We have also reached out to local employment agencies to fill the vacancies, especially since hoteliers are rushing to jump-start their businesses.

“We even provided training to current hotel employees so that they could be multi-skilled. We reskilled others too, and even tried to hire part-timers.

“So, we are not complaining without doing anything to help ourselves. But we need to bring in the foreign workers now.”

“(Otherwise), we would have to turn down hotel bookings, which would damage the country’s image and project a very negative impression of tourism in Malaysia.”

Toh said the industry has carried out aggressive marketing in Turkey and the Middle East to promote Malaysia, adding that the demand is there and industry players are confident of hitting the target of five million tourist arrivals by year-end.

“Our services would be seriously hampered if we do not have enough workers to service tourists. Hoteliers would be hit hard again and lose business that they sorely need to revive the industry, if the worker shortage is not resolved.”

Malaysian Association of Tour and Travel Agents president Datuk Tan Kok Liang concurred with Toh’s projection of having five million tourist arrivals this year, based on the number of hotel bookings thus far.

“The number of hotel bookings from Australians, Indians and Europeans is encouraging and I expect that within the next six months, we can meet the projection of five million tourists.”

He said Malaysia was currently in an advantageous position to revive tourism as our Covid-19 SOP requirements for border entry are not as strict as South Korea’s, for example, and we should capitalise on that.