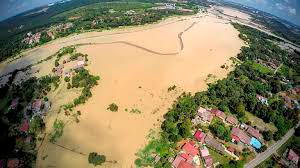 “The alarm bells are deafening and the evidence is irrefutable: greenhouse gas (GHG) emissions from fossil fuel burning and deforestation are choking our planet and putting billions of people at immediate risk,” he was quoted as saying in a statement issued in response to the IPCC report.

The effects of climate change are already hitting close to home. It is understood that the Southeast-Asian region took the top position in terms of the number of natural disasters that occurred worldwide over the last 30 years, with 90 percent of them categorised as climate-related disasters.

According to Ministry of Environment and Water secretary-general Datuk Seri Ir Dr Zaini Ujang, the water cycle in Southeast Asia is expected to speed up which may lead to more frequent occurrences of extreme weather events such as excessive rainfall, floods and droughts.

Malaysia is already experiencing the effects of climate change and proof of this is in the findings of a study on Rainfall Change and Distribution in Malaysia carried out by the Department of Irrigation and Drainage Malaysia in 2018.

The study, which examined rainfall data over the preceding 40-year period, compared the average monthly rainfall between the 1999-2017 period and 1978-1998 period.

The findings showed changes in the 1999-2017 period, with the percentage of rainfall in January increasing by 46.4 percent, March (9.8 percent), June (2.9 percent), August (9.7 percent), October (1.6 percent) and December (12.3 percent). The data also showed that January and December were the sensitive months when Peninsular Malaysia experienced excess rainfall.

As for the remaining months, the findings showed a reduction in the average monthly rainfall – April (4.7 percent), May (6.7 percent), September (4.7 percent) and November (4.3 percent).

The impact of climate change, coupled with other contributing factors such as natural resource management and development planning, would be the occurrence of natural disasters on a larger scale and more frequent basis, warned Zaini.

He told Bernama in an email interview that the main consequence of climate change may be extreme flooding, in both inland/riverine areas and coastal areas.

Inland/riverine floods may see an increase in water volume, intensity and frequency of occurrence while coastal flooding, caused by the rising sea level, may lead to saltwater intrusions landwards.

A clash of both these scenarios may lead to flooding likely to be much worse than one experienced by Peninsular Malaysia’s east coast states in 2014.

Universiti Kebangsaan Malaysia climatologist Prof Dr Fredolin Tangang has been quoted as saying that Malaysia’s incidence of flooding has increased since 20 years ago, with total damage estimated at RM8 billion.

Expressing his concern over projections of extreme weather events worsening in Southeast Asia, he said studies have indicated that the intensity of thunderstorms and extreme rainfall events in Kuala Lumpur has increased by 30 percent since 30 years ago, causing more frequent flooding.

Meanwhile, studies done by the National Hydraulic Research Institute of Malaysia (NAHRIM) have found that the effects of climate change can cause more severe flooding in inland/riverine areas, particularly in the Sungai Kelantan basin, Sungai Muda (Kedah) and Sungai Muar (Johor).

Besides that, climate change may also be responsible for protracted droughts which can result in a shortage of raw water resources for water supplies. The Sungai Linggi basin (Negeri Sembilan), Sungai Pahang and Sungai Muda are expected to experience this phenomenon, according to the NAHRIM studies.

Meanwhile, soil erosion in coastal areas caused by the rising sea level is clearly evident in low-lying areas such as Batu Pahat, Johor.

These studies were aimed at viewing the impact of the rising sea level on densely-populated areas with a high level of socio-economic activities, and also its effects on port and agricultural areas such as Port Klang, Batu Pahat and Pulau Langkawi, as well as to propose appropriate adaptation measures for the locations concerned.

The studies found that the rising sea level in Pulau Langkawi may impact its existing tourism infrastructure, thus affecting its tourism industry. This is because of the low-lying topography of its popular tourist sites such as Kuala Teriang, Kuah town, Pantai Cenang and Kilim Geoforest Park.

Besides posing a threat to these areas’ socio-economic activities, the rising sea level also has the potential to destroy the mangrove swamps located in Kuala Teriang and Kilim Geoforest Park.

Zaini said studies on the impact of the rising sea level on Port Klang found that the impending coastal floods could result in losses to a tune of RM1.4 billion due to the loss of commercial, industrial and agricultural areas and mangrove forests.

“By 2100, the sea level all over the country is expected to rise by 0.7 metres, which is expected to result in the loss of 3,700 square kilometres of coastal land. This will affect 1.5 million people while losses are estimated at RM58 billion,” he said.

In respect of this, integration between climate change adaptation and disaster risk reduction is crucial to help the government and stakeholders to address the impact of climate change more holistically, he added.

At the national level, the National Climate Change Policy serves as a guide to ministries and government agencies to integrate climate change into the implementation of their respective policies.

Zaini said the Ministry of Environment and Water’s Strategic Plan 2020-2030: Environmental Sustainability in Malaysia, which was launched earlier this year, focuses on 30 initiatives, with 34 indicators and 102 targets, based on four main thrusts, namely strengthening governance, green growth, strategic collaboration and social inclusiveness.

He also said that the government would take the stepwise adaptation approach in the development and implementation of the National Adaptation Plan (NAP) to climate change, utilising the Green Climate Fund.

Through the implementation of NAP, the ministry hopes to streamline climate change adaptation actions into the nation’s development plans, he said.

Cities such as Kuala Lumpur and Penang and the Iskandar Development Region in Johor Bahru have taken proactive steps to increase their level of preparedness to mitigate climate-related disaster risks through the use of technology, such as the construction of smart tunnels that serve as a road and channel to divert floodwaters.

He said studies and research on climate change, rising sea levels and storm surges will be increased under the 12th Malaysia Plan to enable their findings to be adapted into project developments, particularly in terms of providing protection against inland and coastal floods and landslides.

The use of machine learning technology, artificial intelligence and big data analysis (BDA) will also be stepped up to manage floods and droughts, said Zaini.

“Based on that experience, the second BDA project called Malaysian Adaptation Index (MAIN) is expected to be introduced this year. It is capable of providing information on the level of adaptation preparedness of every state in Malaysia to face the effects of climate change,” he added.

Commenting on the reduction of GHG emissions, Zaini said climate change mitigation action has already been, and is continuing to be, implemented by the nation. This includes initiatives to reduce GHG emissions in the energy sector by generating energy from renewable sources, enhancing energy efficiency, using energy-efficient vehicles, increasing waste recycling efforts and reducing carbon emissions from deforestation and forest degradation.

In respect of the Paris Agreement (a legally binding international treaty on climate change that came into force in November 2016), Malaysia has updated the targets in its climate change action plan by submitting Nationally Determined Contributions (NDC) to reduce the intensity of unconditional GHG by 45 percent based on its Gross Domestic Product by 2030, from 35 percent earlier.

“The Ministry of Environment and Water is currently developing the NDC Implementation Framework under the provisions of the 12th Malaysia Plan. The framework will have several components, including the NDC Roadmap which will state, among others, sectoral GHG reduction targets up to the year 2030 in order to achieve the NDC goal,” said Zaini.

He said the ministry is also developing an integrated assessment model for the development of long-term sectoral projections until 2050.

“The role of this model is to support evidence-based policy. It will also be used in the development of the long-term low carbon emission strategy (LT-LEDS or Long Term Low Emissions and Development Strategies) which will be submitted to UNFCCC (United Nations Framework Convention on Climate Change),” he said.

The ministry is also reviewing the National Climate Change Policy (2009), in addition to developing the national climate change legal framework and drafting the carbon pricing policy in support of the nation’s climate change agenda.

The Malaysian Meteorological Department (MetMalaysia) also plays a role in monitoring GHG concentrations through the Global Atmospheric Watch station in Danum Valley, Sabah. This station, located in an interior region, indicates Malaysia’s commitment to the world in sharing its GHG emission data.

Through provisions in the 12th Malaysia Plan, MetMalaysia hopes to monitor GHG concentrations more widely with the involvement of its stations in Langkawi, Cameron Highlands and Sibu, Sarawak.

“The government has already developed various policies, strategies and plans to address the impact of climate change. However, to tackle the unforeseen effects of climate change, improvements have to be made continuously in aspects such as information, technology, finance, expertise and technical skills.

“I’m confident that with our clear planning and directions in place, Malaysia can be a role model to other nations when it comes to safeguarding the ‘health’ of our planet,” he added. -Bernama