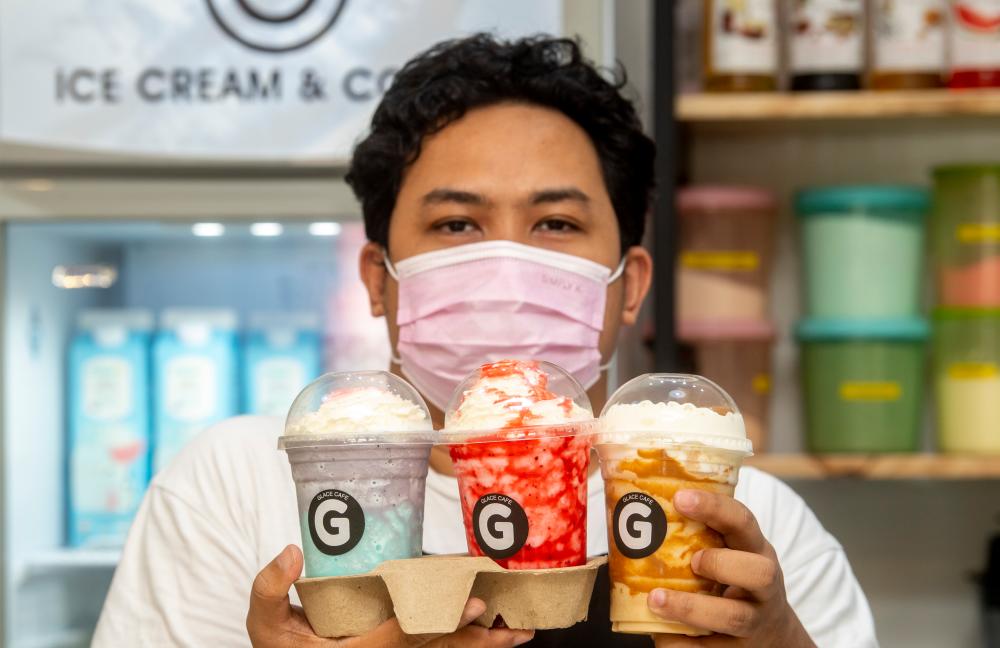 TUMPAT: Refusing to surrender to fate, an information technology (IT) engineer struggled hard to change the 'path' of his life, from dealing with computers and telecommunication networks to making drink concoctions.

Wan Mohd Azizul Solehin Wan Mohd Yusoff(pix), 38, said the Covid-19 pandemic took a toll on him, forcing him to wind-up his business, an IT company he set up in 2016.

“My income as an IT engineer was severely affected due to the Covid-19 pandemic...business was bad and with a heavy heart, at the end of 2019 I quit my job as an IT engineer and decided to venture into a new field.

“I want to make ice-cream and milk and coffee-based drinks. So, I learn the technique of making ice-cream through Youtube and also ask for tips from friends who also run a similar business,” he said when met at Glace Cafe in Pasir Pekan here.

Wan Mohd Azizul Solehin, who is married with two children, aged five and seven years, said he spent about RM2,000 to buy a used ice cream making machine and was only able to offer premium ice cream with various 'toppings' when the business first started.

“Apparently, it is not something easy for me who is used to dealing with computer systems to change to change to making ice cream. It was a real test of my patience,” said the computer engineering graduate from Universiti Kuala Lumpur (UniKL).

He said because of the many competition, he decided to focus on producing ice-cream-based drink concoctions.

“Having worked abroad before, including in Japan, Thailand and the Philippines, it inspired me to produce various variations of milk and coffee-based ice cream drinks, which is considered ‘street drinks’ there,“ he added.

Wan Mohd Azizul Solehin said he has been able to come up with more than 65 types of drink concoctions at the cafe, which has a Korean concept and is opened every day from noon to 9 pm.

“The popular ones are the Fantasy Glace, Starry Cheese, Biscoff Cheese, BubbleGum Marshmellow, Matcha Apple and Tutti Fruitti. The price is RM8 for the regular size and RM15 for the large size,“ he said.

A customer, Ummi Syakirah Che Hazaha, 21, from Kampung Binjai said she found out about the cafe on Instagram.

“It offers more than 65 types of drink concoctions, which to me, is something extraordinary. I think this is the only cafe in Kelantan that offers so many types of drinks, which are instaworthy to be uploaded on Instagram, ” she added. -Bernama