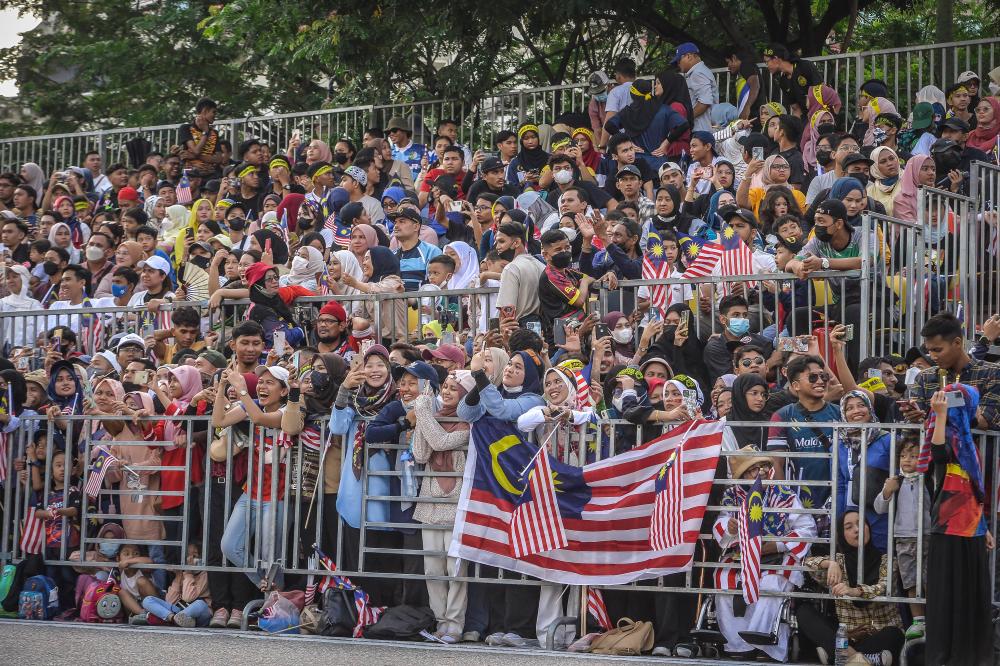 KUALA LUMPUR: The National Day 2022 was celebrated with full of excitement not only at Dataran Merdeka where the parade took place this morning but also throughout the country.

The theme Keluarga Malaysia Teguh Bersama and the high patriotic spirit among the people from all walks of life was also evident as they converged to celebrate the special day in their respective states.

After a two-year lapse due to the Covid-19 pandemic, Malaysians took the opportunity to bring their whole family, including young children, two witness the grand-scale celebrations wherever they are while waving the national flag, the Jalur Gemilang.

Upon arrival at 8.30 am, Mohd Ali then inspected the main guard-of-honour mounted by the Malaysian Armed Forces (ATM), and was followed by the hoisting of the Jalur Gemilang by a team of six officers and members of the 514 Territorial Army Regiment of Batu Berendam Camp.

The event then continued with the reading of the pledge and shouts of “Merdeka” seven times by the attendees, in addition to poem recital, singing patriotic songs and field events.

In PENANG, members of the public began to gather at Jalan Padang Kota Lama at 8 am while waving the Jalur Gemilang and singing patriotic songs such as ‘Tanggal 31 Ogos’ and ‘Saya Anak Malaysia’ before the parade kicked off.

In KEDAH, the National Day celebration started at 9 am after the arrival of the Sultan of Kedah, Al Aminul Karim Sultan Sallehuddin Sultan Badlishah and Sultanah of Kedah, Sultanah Maliha Tengku Ariff at Dataran Medan Bandar here.

The celebration began with the inspection of the main guard-of-honour by Sultan Sallehuddin, followed by a choir performance and a parade of 115 contingents from various agencies, departments, educational institutions and security forces, witnessed by more than 20,000 attendees.

In JOHOR, about 6,000 people were present to witness the National Day 2022 celebration at Dataran Iskandar Puteri here, which was held in a lively and colourful atmosphere with the participation of 131 contingents, pantomime and singing performances, as well as demonstrations by security forces.

The parade and march-past kicked off at about 7.30 am before Menteri Besar Datuk Onn Hafiz Ghazi, who joined a convoy of vintage cars from the pre-independence era, headed to the main stage to deliver his message.

In his speech, Onn Hafiz said Johoreans should continue to honour the struggle of past heroes and emulate their spirit in transforming Johor into a developed state.

In PERAK, the state-level National Day celebration in front of Dataran Bandaran Ipoh was graced by Sultan of Perak Sultan Nazrin Shah and Raja Permaisuri Perak Tuanku Zara Salim and their children Raja Azlan Muzaffar Shah and Raja Nazira Safya, and was attended by 15,000 people.

A total of 95 contingents involving 6,200 participants joined in the parade and march-past, including flag bearers, staff of various government agencies and members of the security forces.

In addition to the march past by the uniformed bodies, the celebration was enlivened with a patriotic song performance by the State Public Service Department’s choir group and a poetry recitation by Mohd Al Hamadi Abu Bakar, the grandson of Mat Kilau, the late Malay warrior, and ended with a flypast by five Sukhoi Su-30MKM aircraft belonging to the Royal Malaysian Air Force (RMAF).

In KELANTAN, a drum performance involving the Malay, Chinese, Indian and Siamese communities was among the exciting performances that ignited the patriotism spirits of nearly 5,000 visitors at the Ketereh District Council Mini Stadium, Kota Bharu, who came to celebrate National Day 2022.

In his speech, Menteri Besar Datuk Ahmad Yakob called for the Kelantan folks to establish harmonious relations between races and respect each other to maintain peace and prosperity.

In TERENGGANU, the National Day 2022 celebration was held in a joyful atmosphere with around 30,000 spectators who filled each corner of Dataran Batu Buruk in Kuala Terengganu as early as 7 am.

In his speech, Menteri Besar Datuk Seri Dr Ahmad Samsuri Mokhtar urged the people of Terengganu to continue strengthening the spirit of unity to create harmony and social well-being among the various races.

In NEGERI SEMBILAN, some 10,000 visitors from various levels of society thronged the compounds of the Seremban City Council here as early as 5.30 am to celebrate the National Day and some even dressed in their best Jalur Gemilang-themed outfits.

In LABUAN, more than 3,000 students, educators and civil servants at the duty-free island filled the compounds of the International Lawn Bowl Arena to take part in the National Day 2022 celebration, which includes a national storytelling performance, colouring contest, karaoke and sports activities.

In SABAH, the state-level National Day celebration at Padang Merdeka, which was attended by Yang Dipertua Negeri Tun Juhar Mahiruddin and wife Toh Puan Norlidah R.M Jasni, was enlivened by a cultural dance and choir performance and was witnessed by over 1,000 visitors.