Keep Jalur Gemilang flying even in the face of adversity 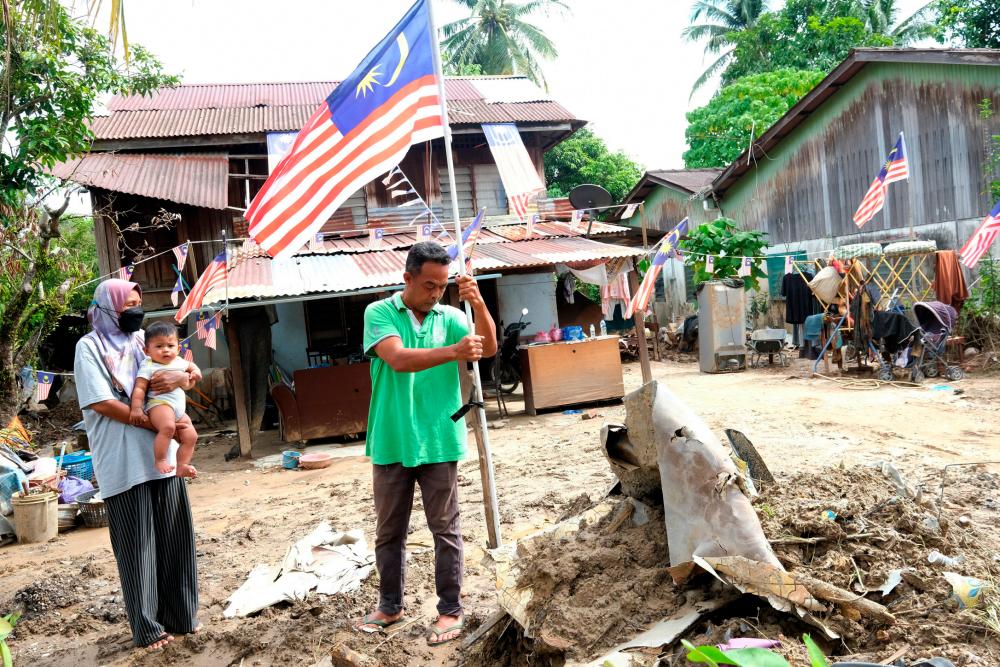 YAN: In the aftermath of the flash floods, a man watched, from his old two-storey wooden house in Jalan Masjid here, a bulldozer removing thick mud in the compound, with a smile and a look of pride to see his decoration of Jalur Gemilang untouched and still flying high.

Although still shocked by the floods that occurred following a water surge phenomenon in Gunung Jerai last Aug 18, which was regarded as a 'small tsunami' by the residents, Rosli Mohamad(pix), 51, who is an army retiree, said he was glad that the floods did not wash away or damage the flags that he had put up to decorate his house and compound in conjunction with the National Month.

“It is to give an air of festivity as we approach National Day itself. I have been doing it every year, decorating my house and compound with the Jalur Gemilang during the National Month, not expecting there is going to be floods.

“I have decorated the house and compound with the Jalur Gemilang flags even before the floods hit the village, and luckily they are not swept away or destroyed by the floods,” he told Bernama.

He said the floods caused some damage to the house, as well as furniture, electrical appliances and other household items.

Rosli, who is now a gardener at a school here, said he and his family are grateful to the various quarters for the assistance provided to them and other residents affected by the floods.

“This (aid) is possible because of the harmony in the country, which we have been enjoying as a result of the country’s independence, with the people of various races coming forward to help, even during this Covid-19 pandemic.

“This is the benefit of unity and flying the Jalur Gemilang and decorating my house with the flag is my way of showing my spirit of patriotism and to help enliven the National Day celebration.

“We should all be grateful for what we have now and no matter what the situation, whether when struck by disaster, like the floods, it should not be an excuse to not fly the Jalur Gemilang, especially for the National Day celebration,“ he said.

Meanwhile, Principal Research Fellow at the Institute of Ethnic Studies (KITA), Universiti Kebangsaan Malaysia, Prof Datuk Dr Teo Kok Seong said Rosli’s spirit of patriotism should be emulated by other Malaysians, like by flying the Jalur Gemlang on their vehicles.

“His unwavering spirit of patriotism to celebrate National Day, despite being affected by the tragedy, is a clear display of his gratitude for the peace in the country, and what he is enjoying as a result of the country's independence.

“The tragedy (floods) should make the people more appreciative of what they have and are enjoying. This is a sign of gratitude and the spirit of waving the flag during the pandemic season and disaster should be emulated by all parties.

“Even though some people say that to show one’s love for the country does not necessarily mean having to fly the Jalur Gemilang, but doing it is one of the ways to express our patriotic spirit,” he added.-Bernama

2.National Digital Identity to be fully implemented in 2024 - Hamzah

3.NRD forms special task force to check on status of Malaysians aged 90 and above