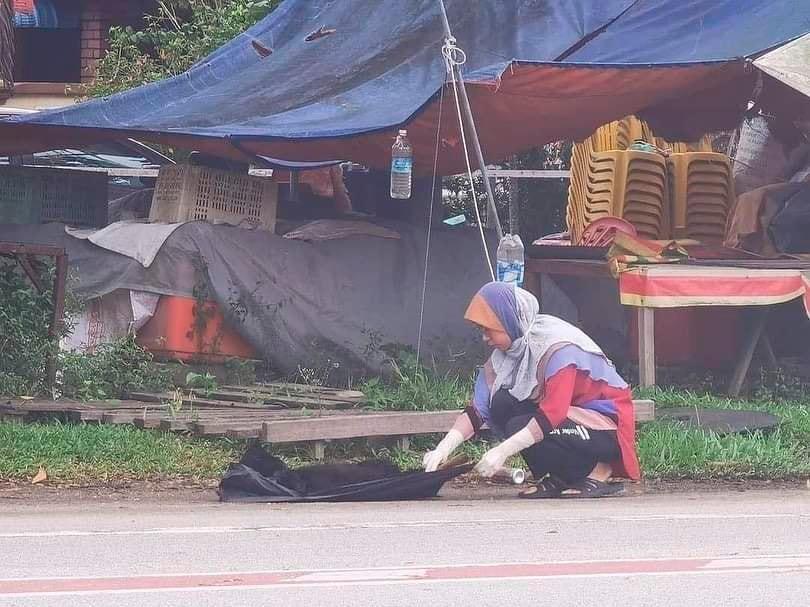 A BRAVE WOMAN recently was seen removing a dog’s remains from the street.

The woman, in a series of images posted on Jan 22 on Facebook page Dunia Haiwan Malaysia showed her picking up the dog’s corpse, wearing gloves, and then moving it to the side of the road.

She was also using a large plastic bag to wrap the remains and then she placed it at the back of her car and drove off, presumably to bury it at a more appropriate location.

The Star Online has highlighted comments from various animal rights groups in Malaysia who noted the woman’s noble act.

“Bless this kind-hearted lady for her compassion in giving the dog a burial. Such acts of kindness deserve to be shared as an example for others,“ said Animal Care founder Dr Chan Kah Yein.

Meanwhile, Sherrina Krishnan from the Pet Adoption Network remarked on how rare it was to see members of the public taking the initiative to clear up roadkill.

“This lady is an inspiration to all of us and an act done in the state of Terengganu reiterates the compassion of any religion - to be kind to all creatures, big and small.

“The people of Trengganu should be proud of her,“ Sherrina said.

Sherrina hoped the woman’s actions would go viral so that more people can witness her compassionate gesture.

“It is very sad to see animals being run down and some are left in very bad shape.

“To remove them and bury them or place them in a safer area is a form of respect to the poor animals that died,“ she pointed out.

It is certainly not easy handling dead animal remains as many people are grossed out by the sight or even believe that it is not their responsibility to do so.