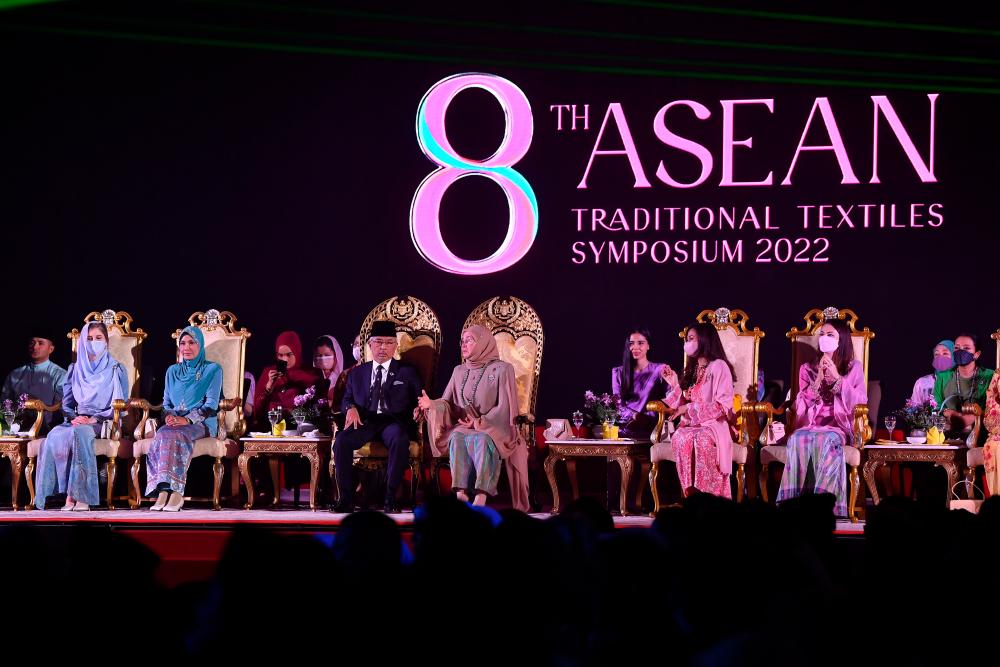 Al-Sultan Abdullah hoped that the biennial symposium would continue to be held in other countries in the future and bring together textile artists from Asean and other regions to share information on the uniqueness of their textiles.

“The response to this event is overwhelming with more than 300 participants. I hope all participants will have a great time here,” Al-Sultan Abdullah said in his opening address.

His Majesty also congratulated Tunku Azizah and her team for their effort in organising the event.

“I have to tell you, the Raja Permaisuri is very busy to make sure this symposium would be a success. I want to share with you that I could see the amount of interest she put into this event. She sometimes could not sleep at night,” said Al-Sultan Abdullah.

The symposium, organised by Yayasan Tenun Pahang Diraja, showcases the beauty of Malaysian textiles, including songket and batik, as well as the techniques of textile-making, such as tekat, tenun, telepuk and menggerus for the world community to learn.

At the symposium, 19 working papers will also be presented by 13 countries, including Brunei, Indonesia, Cambodia, Canada, India, the Philippines and Myanmar, mainly to discuss the preservation of the art and sustainability of original woven textiles in the Asean region.

Meanwhile, Tunku Azizah, who is the founder and patron of Yayasan Tenun Pahang Diraja, thanked the government for its efforts in supporting and preserving the textile craft.

“From the bottom of my heart, I would like to congratulate the government. Thank you very much. We should preserve whatever we have for the future generation,” said Tunku Azizah.

During the ceremony, Tunku Azizah also announced the Pahang government’s project in the Al-Sultan Abdullah Village in Pekan which would provide a place to stay to former inmates from all over Malaysia and give them opportunities to rebuild their lives in an integrated and conducive environment.

“Through this village on 20 acres of land provided by the Pahang government, I want to continue giving them hope from prison to freedom. We want to empower these men and women to be financially independent as well as contributing to the local and domestic economies,” said Tunku Azizah.

Her Majesty also announced the establishment of the Royal Malaysian Society of Artisans as an association to recognise a handful of skilled artisans and continue their journey of hope in recognition of the past and the benefit of the future.

Sharing her journey to preserve and revive cultural traditions, Tunku Azizah said it started two decades ago when she focused on the development and rebranding of Tenun Pahang to Tenun Pahang Diraja in Pulau Keladi, Pekan.

Tunku Azizah said she also continued to undertake study tours to other countries to explore their current practices in preserving age-old traditions.

“When I returned to Pahang, I incorporated what I have learnt in our traditional textiles. In fact, the design was incorporated in all the six dresses which I wore during the Yang di-Pertuan Agong’s installation,” said Tunku Azizah.-Bernama