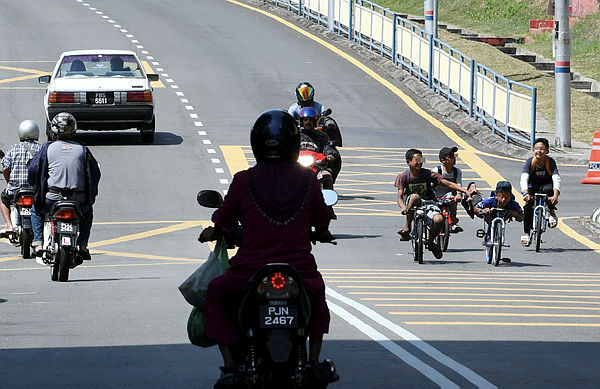 Filepix taken on Mar 22 shows a group of teenagers performing “mat lajak” stunts on their bicycles.

“In the two-hour operation at Jalan Pohon Batu Pancur Hitam which began from around 11am till 12.20pm, police inspected all the bicycles which had been modified and immediately issued 31 summonses,” he said.

Farid said all the offenders were taken to the police station for questioning.

“We summoned their parents and reminded them to monitor their children as such illegal activity posed a risk to them and other motorists,“ he said.

Modified frames, spruced-up handle bars, lowered front forks and safety brakes removed were some of the modifications done on bicycles used by school kids and teenagers in their dangerous “mat lajak” menace.

“If the basikal lajak activities are left unchecked, the teenagers will progress to the more dangerous illegal racing of mat rempit activities,“ he said.

“For them, falling down and getting injured are no major issues.

“But this new discovery of extreme sports is totally wrong as it endangers themselves and also other motorists,” he said.

All of them were released the same day. — Bernama