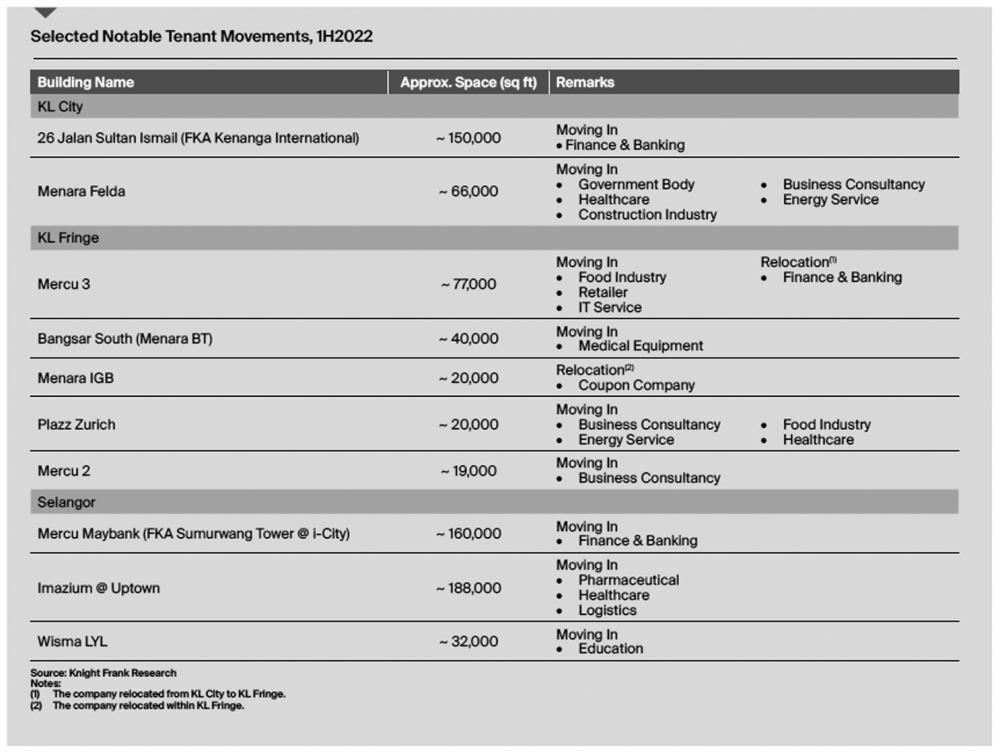 PETALING JAYA: The pace of recovery in Malaysia’s office property sector will continue to improve this year in tandem with the uptick in economic activities and improved business sentiments following the country’s transition to the endemic phase on April 1, 2022, according to property consultancy Knight Frank.

There is renewed interest in co-working space as it presents flexible options to scale operations up or down. It is also attractive in terms of cost-effectiveness and networking thus appeals to businesses that have implemented business continuity plans.

Knight Frank Malaysia group managing director Sarkunan Subramaniam stated that there is an overwhelming interest in office buildings that are certified by the Malaysian Green Technology Corp, which also qualify for tax incentives.

Rental rates and occupancy levels of office buildings in Klang Valley are expected to remain under pressure in the short term as demand is expected to increase due to organisations firming up their workplace planning for office re-entry and employees gradually returning to the physical workplace.

The supply of office space in Klang Valley stood at 111.4 million sq ft as of H1’22 following the completions of Affin Tower @ TRX, The Stride Strata Office and UOB Tower 2 in KL City and Block G of Empire City in Selangor. By the second half of 2022, another 10 office buildings are scheduled for completion – six located in KL City and two each in KL Fringe and Selangor.

There were several office-related announcements during the period, including TIME dotCom Bhd’s recent purchase of Bangunan KWSP in central Kuala Lumpur for RM62 million. Meanwhile, HSBC Malaysia has relocated to the new headquarters in Menara IQ at Tun Razak Exchange (TRX) and moved to a hybrid work model. Air Liquide launched its new headquarters for the Malaysia operations at 1Power House in Bandar Utama, Petaling Jaya whilst Sunway Bhd unveiled Corporate Suite@19 workspace, which is part of the US$60 million (RM251.2 million) transformation of the group’s flagship Sunway Resort.

In Penang, the existing supply of privately owned purpose-built offices was 3.6% lower at 6.9 million sq ft (Q4’21: 7.2 million sq ft) due to recategorisation by National Property Information Centre. On the mainland, it remained unchanged at 1.6 million sq ft. The asking rentals of selected office buildings under review in George Town remained stable from RM2.80 to RM5.00 per sq ft per month.

In Johor Baru, the supply of privately-owned purpose-built office space was 0.6% lower at 8.4 million sq ft as of Q1’22 due to the removal of one property that no longer meets the definition of Provided by Owner. The state has an incoming office supply of 2.5 million sq ft.