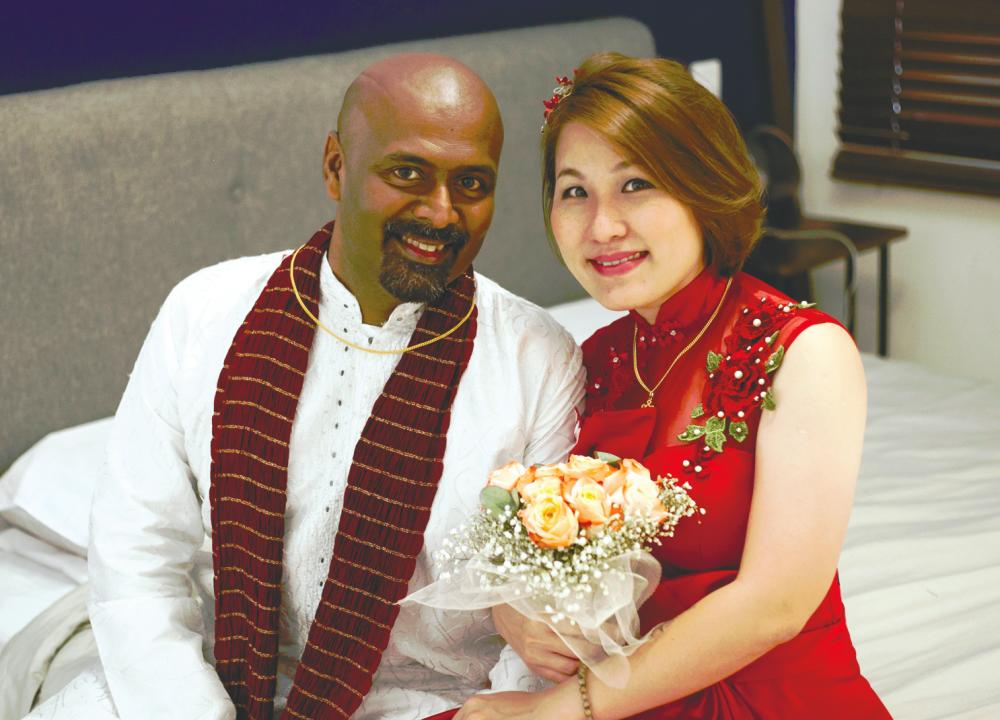 PETALING JAYA: Love can transcend boundaries and also lead to a sense of mutual respect for the traditions of others.

This holds true for Joshua Ambrose, 47, and his wife Krystle, 37, who first locked eyes eight years ago when they met on stage.

Ambrose, who was a performer then, had sung Deep Purple’s famous hit Soldier of Fortune, which made Krystle’s heart leap.

“I guess the song attracted her to me as a fan. I pulled her on stage and she started to sing.

“I was mesmerised by her talent. We only got connected a few years later but at the time, the stars were not aligned. Although there was a distance between us, we continued to keep in touch,” he told theSun from their Kuala Lumpur home.

They decided to finally tie the knot on Feb 22 this year.

“We felt we had held back too long and decided to be together forever,” Ambrose said.

Krystle recounted that she had to be hospitalised due to sacroiliac joint aches that left her in pain for three days.

“I was in pain and at that point, visitors were not allowed due to Covid-19. They needed to pay for a test to visit and had to wait for a few hours before being allowed in.”

Once Ambrose got wind of Krystle’s situation, he rushed to the hospital to help.

“He would wait and insisted that he wanted to take the test. He also spoke to my doctors to make necessary hospital arrangements.

“He was there for me even after I was discharged and made sure I went for my medical follow-ups,” she said, adding that his caring nature sealed her decision to be with him as a lifelong partner.

Krystle said her parents had initial misgivings about her choice of a life partner.

“They finally accepted that as long as he took care of me and is a good person, his background did not matter.”

Yet, she felt a sense of duty in preserving her ancestral traditions. Her then-husband-to-be would have to perform the tea ceremony that is traditionally observed in Chinese weddings.

In such a setting, the bride and groom would serve tea to their families.

The act, which symbolises the union of two families, was important to her.

“I taught him how the ceremony would be done (since) he and his groomsmen knew nothing about it. We even had a lady who led the ceremony.

“Tradition must be preserved as it is a way to understand the roots of our culture.

“We can marry a person of whichever race, but we should embrace their traditions and try to preserve them as much as we can for the next generation,” said Krystle, a customer experience manager.

Ambrose studied the requirements for the ceremony. He added a twist by wearing a traditional male Indian outfit called a jippa during the ceremony.

Similarly, Krystle had to learn how a church wedding was done.

“He showed me videos of how a Catholic wedding was conducted.”

Ambrose said the Malaysian landscape has changed in terms of acceptance of mixed marriages.

“Nowadays, many people accept it and are open about it.

“It was only the older generation who did not. It is not a stigma but just the way they were brought up. But such prejudices have almost faded now,” he said.

The number of interracial marriages in Malaysia has risen over the years. The Marriage and Divorce Statistics Report released by the Statistics Department in November 2019 showed a total of 18,509, or 9%, of the 206,253 marriages registered in 2018 were interracial unions.

In conjunction with Malaysia Day, Ambrose and Krystle expressed hope that Malaysians would do away with prejudices and embrace the different races and traditions that make the country truly unique.