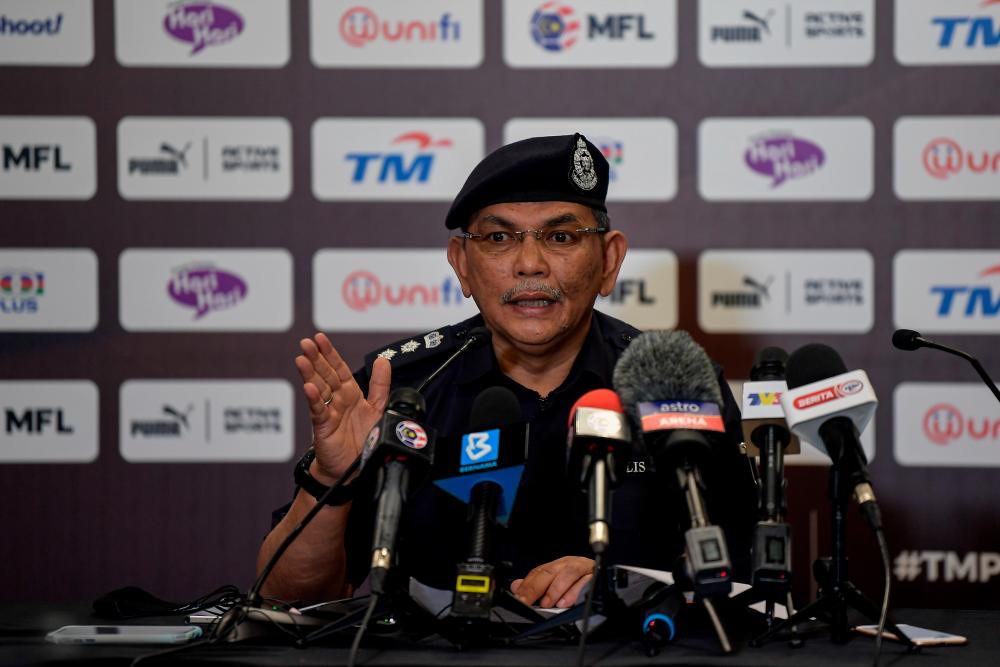 KUALA LUMPUR: About 1,500 police personnel will be deployed for the Malaysia Cup 2021 final match between Kuala Lumpur (KL) City FC and Johor Darul Takzim (JDT) to ensure a smooth and incident-free match at the Bukit Jalil National Stadium tomorrow night.

Cheras district police chief ACP Muhammad Idzam Jaafar(pix) said security will be enhanced inside and outside the stadium to ensure the safety of spectators and compliance with the Standard Operating Procedures that have been set.

“For your information, we have also formed arrest teams in case spectators misbehave, become violent or create a provocation, and they will be arrested immediately,” he said at a press conference and safety briefing at the Bukit Jalil National Stadium today.

He also appealed to spectators who come to the stadium to enjoy the game and not create disturbances that could cause chaos to any of the teams.

He said spectators must always observe physical distancing in the stadium, wear a face mask, behave and do not commit extreme provocation to the point of causing chaos during or after the match.

Muhammad Idzam also said some 20,000 spectators are expected to fill the stadium. Those who have not completed their vaccination doses as well as children under the age of 12 are not allowed to enter the stadium.

He also said to ensure smooth traffic flow the public is advised to use public transportation to the stadium because parking is limited.

“Avoid driving near Bukit Jalil if you do not intend to watch the football match, follow the instructions of the police officers on duty and motorists are not allowed to park their vehicles on the road shoulders near the entry-exit points of the stadium.

“Those found doing that will be issued with a summons and their vehicles towed for blocking traffic flow,” he said.

Those with any information or queries can contact the Cheras district police headquarters at 03-9205 0222.

The Malaysia Cup final will take place at the Bukit Jalil National Stadium between JDT and KL City FC at 9 pm.-Bernama