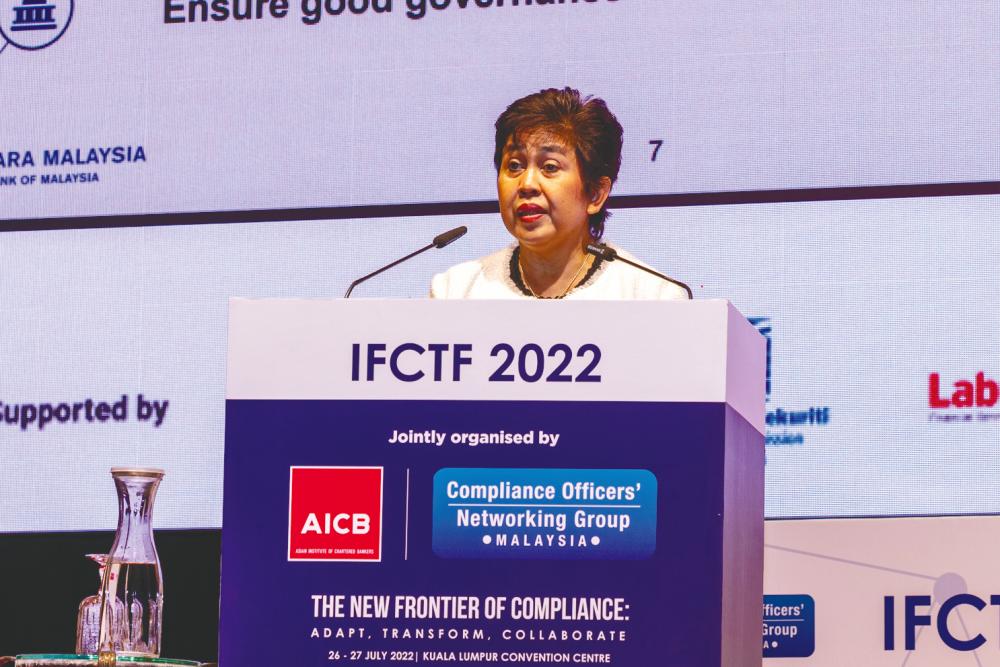 Nor Shamsiah speaking at the12th International Conference on Financial Crime and Terrorism Financing 2022.

“Malaysia is firmly on a recovery path. Supported by solid domestic activity and positive external demand, the economy is expected to grow steadily in 2022 and 2023, despite continuing challenges from rising cost pressures, the military conflict in Ukraine and strict Covid-19 containment measures in China,” she said at the opening of the 12th International Conference on Financial Crime and Terrorism Financing 2022 (IFCTF 2022) today.

Nor Shamsiah said the local economy is benefiting from strong demand for its exports, particularly electrical and electronic and commodity-based products. The country’s diversified export products and markets will continue to support its export growth.

The central bank governor remarked that the economy is also benefiting from a strengthening job market.

“While the unemployment rate was at its peak of 5.3% in May 2020, it is now at 3.9%. Almost 26,000 new jobs were created in the first three months of this year, similar to pre-pandemic levels. Job vacancies and wages are also rising. This will further reinforce the recovery in domestic demand going forward,” she said.

However, she noted that there is “some unevenness” in the economic recovery, such as rising prices, which is a global phenomenon.

“For Malaysia, the direct impact from elevated oil prices to headline inflation has been largely dampened by price controls on fuel and essential food items. Yet, there are still indirect effects from high global commodity prices, as they are a key driver of the rise in producers’ input costs.

“Inflation developments in Malaysia this year reflect the pass-through of some of these costs, as well as the strengthening of domestic demand. Consequently, although headline inflation is still projected to remain low and stable and range within 2.2% to 3.2% in 2022, core inflation increased to an average of 2.2% in the first six months of 2022 compared to 0.7% in 2021,” said Nor Shamsiah.

On the ringgit, she said that relative to the US dollar, most major and regional currencies, have depreciated. Yet, the ringgit has remained broadly stable when compared with currencies of major trade partners. In fact, Malaysia's nominal effective exchange rate registered a depreciation of only around 0.1%.

Speaking on cybercrimes, Nor Shamsiah said that according to the National Risk Assessment 2020, fraud which includes cybercrimes is among the country’s top high-risk crimes, with a higher number of cases and losses suffered compared to the previous assessment conducted in 2017. As more people switch to mobile phones for online transactions, BNM is seeing an increase in online banking fraud incidents involving mobile malware.

Separately, Finance Minister Tengku Datuk Seri Zafrul Tengku Abdul Aziz said the government is committed in its efforts to fight against illegal activities that have led to revenue leakages such as smuggling. It is spearheaded by a multi-agency task force and the National Anti-Financial Crime Centre through coordination of joint operations across enforcement agencies. He disclosed that there is an ongoing project to recover RM5 billion within five years of loss of revenue arising from the smuggling of cigarettes and liquor.

“Overall, I would like to stress that these commitments across the government agencies are bearing fruit,” he said in his opening speech at the annual meeting of the Asia/Pacific Group on Money Laundering.

He added that the World Governance Indicator shows that Malaysia has improved its ranking from the past 10 years in the voice and accountability, regulatory quality, rule of law and control of corruption dimensions. Similarly, it ranks higher compared with the average of East Asia and Pacific, especially in the government effectiveness and regulatory quality dimensions.