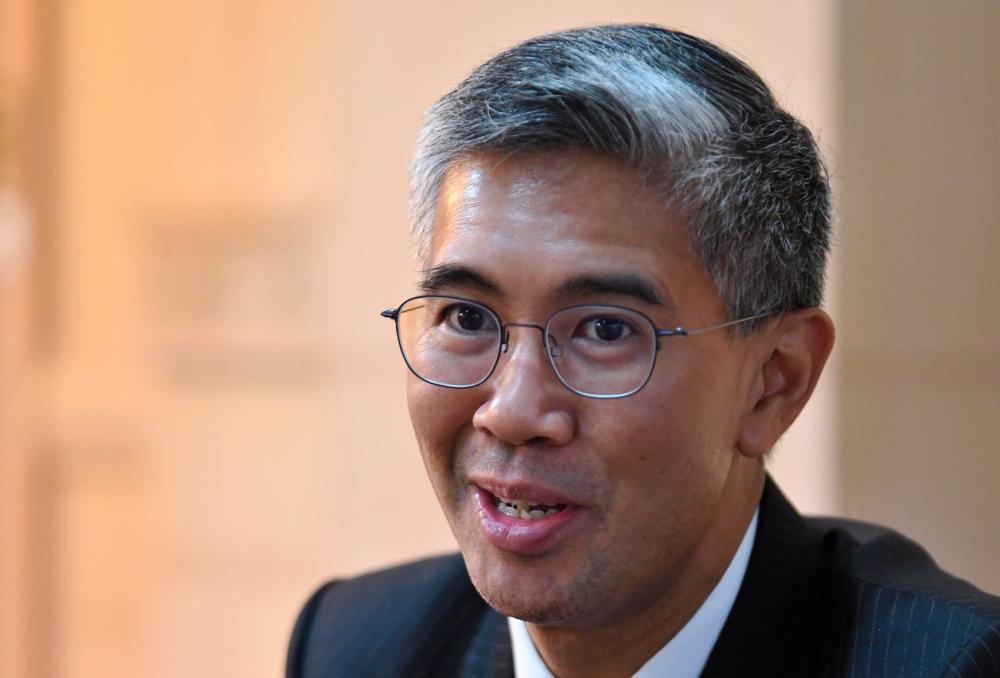 KUALA LUMPUR: Malaysia is at a tipping point in the fight against the climate and biodiversity crises, as it steps up efforts and commitments to transition to a low-carbon, climate-resilient economy, Finance Minister Tengku Datuk Seri Zafrul Tengku Abdul Aziz(pix) said.

He said this entails a gradual and complete transformation of the country’s economic and financial systems, as well as sectors relating to its food, water and energy, as well as primary commodities, in a way that is sustainable, inclusive, just and fair.

To further reduce green house emissons (GHG), he said the government has emphasised green investments, complemented by the progress since the signing of the Paris Agreement, namely increasing the unconditional Nationally Determined Contributions (NDC) to reduce GHG emissions to 45 per cent from 35 per cent previously,“ he said.

Tengku Zafrul said this in a virtual conference titled 'Road to Glasgow and Kunming: Combating Climate Change and Biodiversity Loss in Malaysia' today organised by WWF-Malaysia and the European Union (EU) Delegation to Malaysia.

Tengku Zafrul said Malaysia has joined the Coalition of Finance Ministers for Climate Action (CFMCA) and benefitted from various workstreams undertaken by the coalition.

“And thirdly, we have committed to the Helsinki Principles in promoting national climate action through fiscal policy and the use of public finance, which have been endorsed by the CFMCA,“ he said.

Meanwhile, Tengku Zafrul said his ministry has also aligned green agenda initiatives in Budget 2021 with Sustainable Development Goals (SDGs) and will carry on with the exercise in the upcoming Budget 2022 which will focus on recovery, resilience and reform.

Besides, the five-year plan of the 12th Malaysia Plan (12MP) also incorporated initiatives that will lead to a low-carbon, climate-resilient economy based on clean, green and resilient development.

Among the main measures include focus on further developing Malaysia’s circular economy, greater emphasis on green growth, and a shift toward building sustainable cities.

The government will also continue to work on pricing the country's emissions, and reducing reliance on hydrocarbons while retaining at least 50 per cent forest cover.

“The 12MP has outlined Malaysia’s path to net zero emissions. This includes achieving carbon neutrality by 2050 and phasing out coal-powered energy generation.

“All of this sends strong policy signals to the business community about the country’s approach to combating climate change,“ Tengku Zafrul said.

With Malaysia considered as one of the world's top biodiversity-rich countries, he said the 12MP has emphasised on protecting natural capital in order to stabilise the Malayan tiger population, and prevent biodiversity loss.

“The goal is to protect 20 per cent of land area, while also providing conservation financing through programmes such as Ecological Fiscal Transfer (EFT) and Payment for Ecosystem Services (PES),” he said.

Meanwhile, in an effort to ensure an equitable and rapid transition to a low-carbon economy, collaboration with many sectors have achieved a milestones which include the establishment of the Joint Committee on Climate Change (or JC3).

“Through this platform, the Central Bank of Malaysia, Securities Commission and the industry are taking active steps in ensuring transparency of climate-related financial risks,“ Tengku Zafrul said.

He said the government has also encouraged the banking sector to be part of the United Nations (UN) Principles for Responsible Banking, and the NetZero Banking Alliance, and urged sovereign wealth funds and institutional investors to join the Net-Zero Asset Owners Alliance in order to reduce portfolio emissions.

“Overall, all of these efforts will pave the way for Malaysia to develop a more comprehensive sustainable finance industry, and at the same time, complement the government’s efforts to achieving the SDGs,“ he added.-Bernama