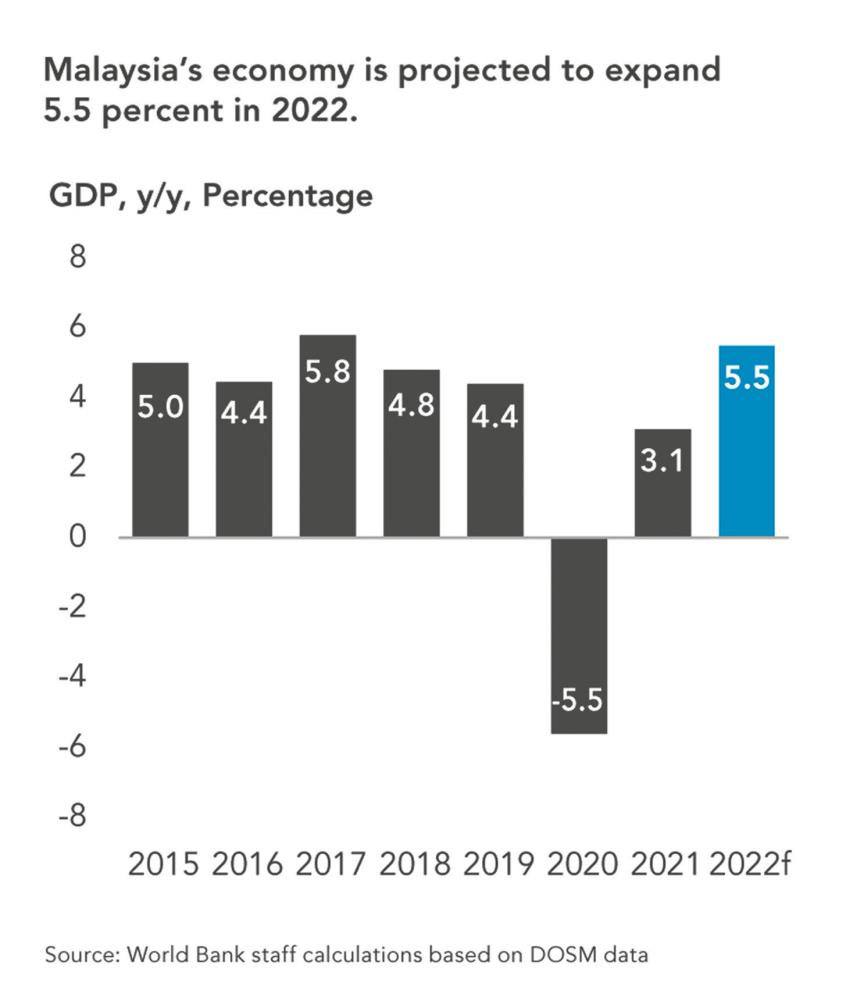 PETALING JAYA: Malaysia’s economy is projected to expand 5.5% this year, driven mainly by a strong rebound in consumption, according to a World Bank report released today.

In the short term, the World Bank report said, fiscal policy should be focused on maintaining financial support for the poor and vulnerable and establishing a more inclusive social protection framework with better targeting. The government’s various cash assistance programmes throughout the pandemic have provided important support to households. However, the World Bank’s High-Frequency Phone Survey revealed that these cash assistance programmes did not reach nearly a quarter of those earning RM2,000 or less month.

While higher fiscal spending in response to the Covid-19 pandemic has helped support the economy, it has led to further narrowing of the fiscal space. Efforts to rebuild fiscal buffers through increased revenue collection and enhanced spending efficiency should remain a key policy priority. However, because the economic recovery is still in its early stage, medium-term fiscal consolidation has to be tackled gradually.

The report highlights challenges constraining economic development in lagging states, namely Kedah, Perlis, Kelantan, Sabah, and Sarawak, characterised with the lowest average income/highest poverty rate. The report finds that some barriers to growth in these states could be addressed through deepening federal-state collaboration under an explicit policy framework for addressing specific challenges of lagging states.

“With the right governmental support systems and prudent fiscal steps in place, Malaysia’s economy can expand beyond a return to pre-pandemic levels, towards achieving significant long-term development goals,” it said.

“We therefore expect future movements in the OPR (overnight policy rate) to be largely driven by domestic economic conditions to respond to forex (foreign exchange) volatility, preferably at a gradual and measured pace”, he told reporters at a virtual media briefing in conunction with the release of the World Bank report .

“Beyond rebuilding fiscal buffers, new growth opportunities could be seized in the post-pandemic world. For example, Malaysia can step up efforts to address some of the main constraints facing the development of Malaysia’s services sector and reinvigorate private investment,” he said in a statement. An evening with Ne-Yo

3.An evening with Ne-Yo